Saubermacher opens new high-tech recycling plant for lithium-ion batteries. The plant has been installed at Saubermacher Group company Redux Recycling in Bremerhaven (Germany). Saubermacher and Redux have jointly been researching and developing processes and technologies for many years. The plant is capable of processing all types of lithium-ion battery and has an annual capacity of 10,000 tonnes. The innovative process will allow Redux to achieve recycling rates that are as much as 40 %1 above the statutory target values. The level of investment in the plant was around three million Euros. 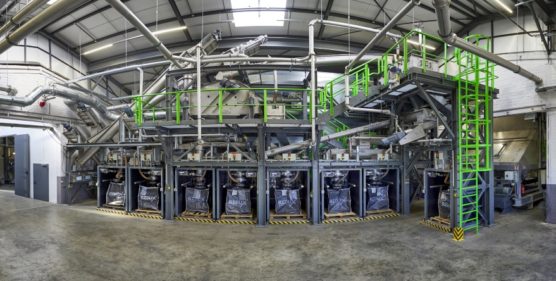 Battery recycling, a key issue of the transition to electric vehicles

In their composition, lithium-ion batteries are highly heterogeneous and have a high energy value, even at the end of their service lives. This fact alone makes recycling particularly complicated, and necessitates high standards of safety. Saubermacher and Redux, as the companies announce on a press release, use a time-consuming, multi-stage process that involves a sorting line and mechanical processing, a process developed by Saubermacher itself through intensive research. “We achieve higher recycling rates when compared to other methods. At present, we’re achieving around 60 % to 70 %”, explains Gerhard Ziehenberger, COO of Saubermacher AG. The process recovers important secondary raw materials such as stainless steel, aluminium, copper, plastic and active materials. The energy obtained from the batteries in the discharge process is fed into Redux’s own grid.

Global growth market. Quantities of lithium-ion batteries (disposable and rechargeable) are growing at double-digit rates, but return rates for old batteries remain low. “We’re expecting some 2000 to 3000 tonnes of old batteries annually over the coming years”, explains Ralf Mittermayr, Spokesperson of the Board and CMO of Saubermacher AG. “The plant has an annual capacity of 10,000 tonnes, so we’re well prepared for the quantities that we expect to see around the globe”, explains Hans Roth, Chairman of the Supervisory Board and Owner of Saubermacher. Synergies and logistical advantages were crucial to the integration of the plant at the Bremerhaven site, and have helped to secure the site for the long-term. The site has previously been engaged in the processing of conventional batteries. All in all, Saubermacher has invested more than ten million Euros in battery recycling in the past two years.

Raw material extraction 4.0. The path from the idea to the scale model took six years. An additional two years were needed to actually realise the large-scale plant. But the goal is still some distance away. “Our vision is zero waste, so in the long-term, we’re aiming for a recycling rate of 100 %”, continues Ziehenberger. Working with technology partners like AVL List GmbH, the internal R&D team takes various approaches, such as using used battery systems as storage media, an idea that won Saubermacher the Energy Globe Austria Award in the spring.

Forsee Power announces the takeover of Holiwatt (formerly Centum Adetel Transportation), a specialist in rail energy storage and fast charging systems established in Ecully, near Lyon.  This acquisition strengthens Forsee Power’s position on the rail market and provides the French company with...
More and more public transport operators are experiencing converted buses in test operation. German start-up e-troFit announces it has increased the test capacities of its series vehicles for potential fleet operators by expanding its pool of demonstration vehicles. The offer of no-obligation trials...
New battery supply agreement for Akasol in the bus world. The German company announces a new deal signed with a «major bus and commercial vehicle manufacturer from Belgium» with a total volume in the mid-double-digit million euro range. Although not directly mentioned, the manufacturer should be Van...
Cummins has began testing a hydrogen-fueled internal combustion engine. Following the proof-of-concept testing, the company plans to evaluate the engine in a variety of on- and off-highway applications, supporting the company’s efforts to accelerate the decarbonization of commercial vehicles. Cummin...