The Caetano e.City Gold fleet that will hit London roads will be equipped with Forsee Power batteries. The 34 buses will be delivered from 2020.

Forsee Power has been a partner of the Portuguese leader CaetanoBus since 2017 and equips the e.City Gold range, for the cities of Guimarães, Porto, Braga, Aveiro and Lisbon. 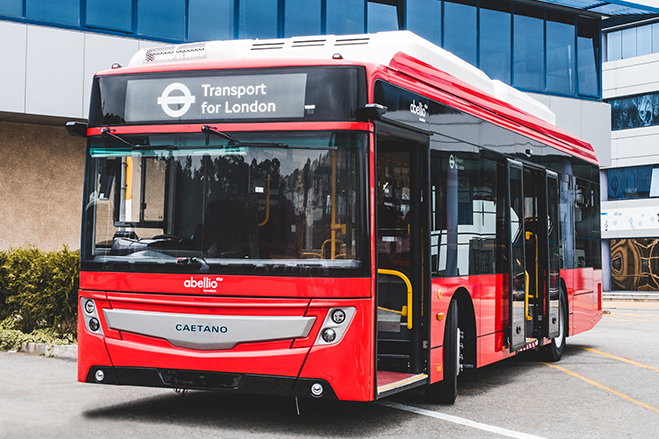 For the London market, CaetanoBus vehicles will be equipped with Forsee Power’s Zen 35 technology, unveiled at Transport Publics in 2018 and suited for night charging as it provides high energy density. Each of the 34 buses, whose autonomy will reach 230 km, will embark on its roof 350 kWh of energy. Zen technology, incorporating NMC cells, allows a day of operations with night charging at the depot, Forsee Power points out.

As a result of the order for the vehicles to CaetanoBus, Forsee Power Zen batteries are entering the UK market.

The French supplier has been present in the UK market since 2013 with the Irish manufacturer Wrightbus, equipping its 100% electric and hybrid hydrogen buses. Forsee Power has already delivered hundreds Flex 7 battery systems to power several 100% electric bus lines in the United Kingdom.

Forsee Power, the supplier highlights, will soon supply nearly 90% of the hydrogen buses of the JIVE project (Joint Initiative for Hydrogen Vehicles Across Europe), with its high-power Pulse 2.5 solution, to be rolled out by 2020.

Forsee Power Zen batteries also equips the vehicles of the French manufacturers Heuliez and Alstom, selected by the RATP in Paris as part of the largest call for European bus offers in April this year.

Europen players for the transition

“While the UK market is giving pride of place to Chinese manufacturers, this alliance demonstrates that European players can compete in the most competitive markets in a context of sustainable energy transition,” said Sebastien Rembauville-Nicolle, Director of the Smart Transport Division at Forsee Power.

The new Schunk SLS 301 series variant introduces a ELT recognized pantograph with variable operating heights, aimed at promoting quicker and safer hands-free electric vehicle charging. With easy integration into existing and new infrastructure requirements, its compact size increases usable floor sp...
ViriCiti has been chosen by e-Traction as the standard telematics partner for all the electric buses retrofitted by the Dutch company. ViriCiti has already in force partnerships with Ebusco and Gillig, among others. e-Traction is active in the field of retrofitting ICE buses to electric drive, imple...
Lion Electric announced that the company’s upcoming battery manufacturing plant and innovation center will be located at the YMX International Aerocity of Mirabel, Quebec. The announcement comes amidst increased expansion of the company’s operations, having recently announced the construction o...
Akasol takeover has been completed: BorgWarner is now owner of 89% of the battery systems producer’ shares. The Darmstadt-based company announced today that «Shareholders of Akasol have accepted the voluntary public takeover offer by ABBA BidCo AG, a subsidiary of BorgWarner, after the extende...