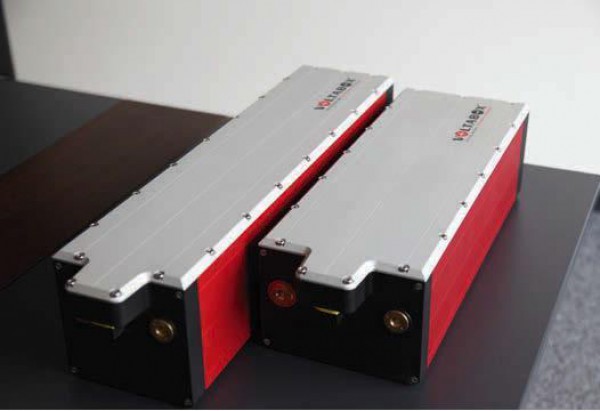 Turn over of trolleybuses

Two trolleybus prototypes equipped with the newly developed battery systems from Voltabox have been in testing with Dayton RTA since 2014, said a press release from Voltabox. Following the successful completion of the pilot phase, the transit authority has finalized its decision for Voltabox’s LTO technology. The 20-year-old fleet of trolleybuses is being replaced with 26 new dual-mode buses in the first step. These receive power via overhead lines and can alternatively be powered by a battery. Voltabox supplies the modern high-voltage traction batteries with an energy content of 66.7 kWh, which are charged on-the-go via the overhead lines. These battery systems are the first to feature Voltabox’s prismatic cells using high-quality lithium titanate oxide (LTO) chemistry. With 16,500 charging and discharging cycles over a service life of around 14 years, the Voltabox LTO battery systems offer longevity roughly five times greater than previous systems for trolley buses.

Thanks to the batteries, the trolleybuses can drive up to 24 kilometers without power from the overhead lines. This gives Dayton RTA trolleybuses a new kind of flexibility – allowing them to take alternate routes in heavy traffic or construction or for extending routes that are not covered by the existing grid of overhead lines. The new buses are scheduled to be in regular operation as early as spring 2019. The first deliveries from Voltabox are planned for this year. To date, the transit authority transports more than 2 million passengers per year on its trolley routes. The new vehicle concept is expected to increase this number even further in the future.

“This is a real breakthrough for us; the new LTO technology has proven itself in practice. We are very happy that the testing performed by our partner, the local transit authority for Greater Dayton, provided excellent results and that we were subsequently awarded the contract for series production. This shows we are prepared to meet the needs of other transport companies that are looking to benefit from our battery systems,” says Jürgen Pampel, CEO of Voltabox AG. “Over the past months and years, we have equipped a large percentage of the trolleybus fleets in Seattle, San Francisco, Linz and other cities with our state-of-the-art battery systems. We are proud to be making a significant contribution to the continued electrification of local public transportation in Dayton, where they’ve been using electric trolleybuses since 1888.” Globally, about 40,000 trolleybuses in roughly 370 cities are currently in operation across 47 countries. The trolleybus is considered to be the cleanest and most economical form of e-mobility in public transportation. On the one hand, zero emissions makes an important contribution to the sustainable development of cities and regions. On the other hand, with an average capacity of up to 8,000 passengers per hour and direction, they are as efficient as trams. The use of Voltabox battery systems also allows for flexible route extensions, even in city centers.

Ballard Power Systems and Forsee Power announce the signing of a Memorandum of Understanding (MOU) for a strategic partnership to develop fully integrated fuel cell and battery solutions, optimized for performance, cost and installation for heavy-duty hydrogen mobility applications. The first compan...
Otokar relies on Voith Electrical Drive System for the e-Kent C just unveiled in Munich at IAA Mobility 2021. At the IAA Mobility in Munich, Germany, the e-Kent C was in operation as a shuttle bus between the exhibition grounds and the city center on the “Blue Lane” innovation route (whe...
School bus manufacturer Collins Bus (subsidiary of REV Group, Inc.) has reached an agreement with all-electric powertrains provider Lightning eMotors. The strategic partnership has the goal of manufacturing and deploying zero-emission, all-electric Type A school buses. The agreement includ...
Autonomous charging solutions supplier Rocsys announces opening office in the United States. The facility is located in Portland, Oregon. In the coming years, Rocsys Inc will set up local production for the North American market, complying to the Buy American Act. In 2021, Rocsys underlines it has s...