280 plug-in hybrid buses from ADL to NTA (Ireland). The first unit has been handed over

Ireland’s National Transport Authority (NTA) has unveiled the first of an initial batch of 100 Alexander Dennis Enviro400ER plug-in hybrid buses, and has ordered a further 180 of these zero-emission capable buses for delivery in 2021.

The orders form part of a five-year framework agreement for a total of up to 600 Alexander Dennis Enviro400ER buses that was first announced in January 2020. 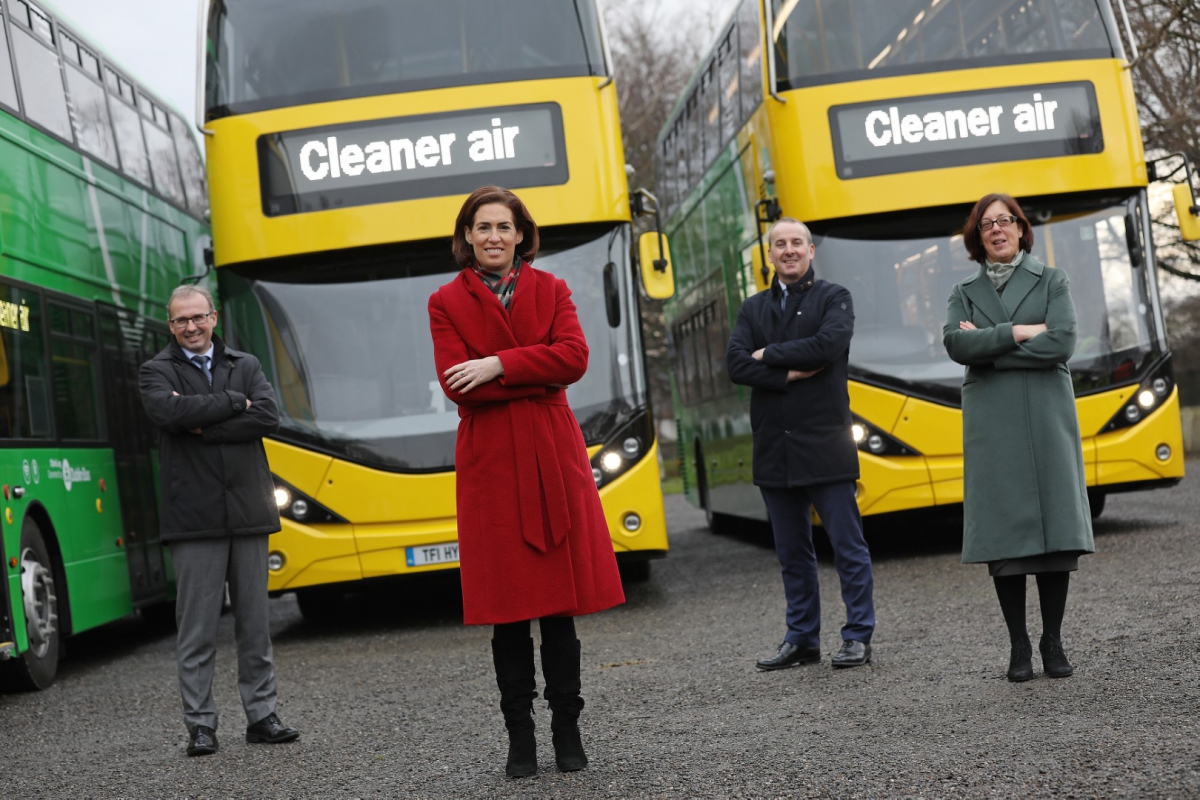 Plug-in hybrid buses for NTA in Dublin and Galway

Of the initial 100 vehicles, 74 will be operated by Dublin Bus in the Irish capital, and a further 26 will be operated by Bus Éireann in Galway, ADL points out. The first vehicles are expected to enter service in early 2021, and were presented to stakeholders and press at a ceremony in Dublin today.

The Enviro400ER is a double deck diesel-electric hybrid, capable of at least 2.5 kilometres continuous electric range with no exhaust emissions. It utilises the BAE Systems Series-ER hybrid system with a 32kWh next-generation lithium-ion battery energy storage system that can be charged externally via a plug-in connection, which means that the Enviro400ER is recognised as a ‘clean vehicle’ by the European Union’s Clean Vehicles Directive.

In addition to its continuous zero tailpipe emissions range within geofenced areas, the Enviro400ER switches off its diesel engine at low speeds during approach to and departure from stops and when stationary.

The Series-ER system from BAE Systems powers more than 13,000 buses around the world. Anyhow, the supplier points out that the Irish buses are the first in the world to benefit from the company’s new plug-in technology. This means that as well as using the efficient onboard generator to charge itself while the bus is on the move, the buses can now also plug into the grid for power, giving operators another way to recharge their buses.

NTA Chief Executive Officer, Anne Graham said: “The NTA is committed to the transition to zero and low emission public transport vehicles, and with these new ADL buses, we are taking a significant step towards a more sustainable bus fleet. These vehicles will also add some badly-needed extra capacity to our city fleets in Dublin and Galway and we look forward to them becoming operational early in the new year.”

ADL President & Managing Director, Paul Davies said: “The Alexander Dennis Enviro400ER is ideally suited for flexible operating needs including zero-emission running at air pollution hotspots. With the ability to externally charge the batteries, the use of on-board power generation can be further reduced. This new generation of double deck buses for Ireland once again demonstrates that with ADL’s focus on innovation, we are building the buses our cities need to solve their transport challenges.”

Ian Wilson, Director of Business Development for Power & Propulsion Solutions at BAE Systems, said: “Clean transportation technology in our cities is critical to reach a zero emission future. Our system will help Ireland take the next step towards full electrification and improve the air quality where people live, work and visit.”