Métropole Rouen Normandie has ordered a batch of 10 Mercedes eCitaro.

“We’re putting our trust in 100 % electrified buses,” announces Nicolas Mayer-Rossignol, Chair of Métropole Rouen Normandie. The region in north-west France consists of the city of Rouen and 70 predominantly small municipalities. Now, following the latest order of ten eCitaro buses, the first fully electric city buses will be added to the region’s fleet and will cover the routes almost silently and locally emission-free. 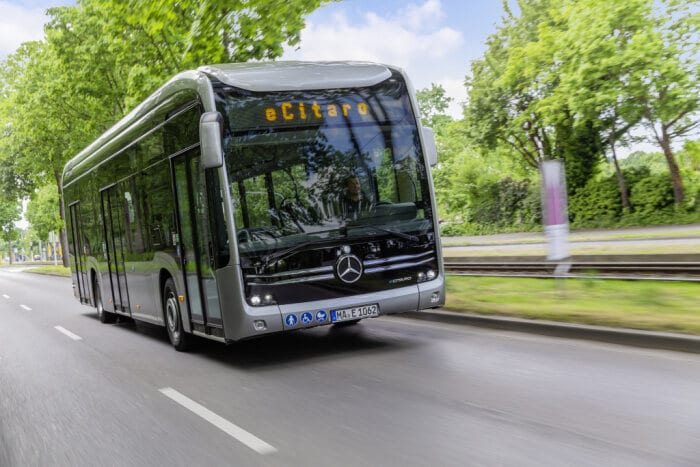 Mercedes-Benz will deliver the vehicles in summer of this year. The order from France comprises eight solo buses with the latest generation of NMC batteries which have an energy capacity of 396 kWh each, as well as two further solo buses equipped with innovative solid-state batteries with a capacity of 441 kWh. The buses will be charged in the Rouen depot. They all feature a charging socket at the front right of the bus as well as another at the rear of the vehicle.

Active Brake Assist for the eCitaro headed to Rouen

Daimler Buses points out in a press release: «Three double-width doors ensure rapid passenger flow at the bus stops. Inside the bus, passengers are greeted by an attractive interior: graphite black floor covering, seat upholstery in smoke grey and blue grab handles complement one another to deliver a very attractive interior. Passengers also benefit from USB sockets to charge their devices. Plus, the passengers enjoy not only cleaner transport, but also a high level of safety: among the comprehensive range of equipment on-board the eCitaro are Active Brake Assist and the Sideguard Assist turning aid. Besides the familiar paint colours of the Astuce network, all ten eCitaro buses will feature a clear reference to their fully-electric drivetrain: “100 % électrique”».

Métropole Rouen Normandie’s Astuce public transport network has a fleet of more than 200 buses, some of which are used for an interesting range of services: the region has around half a million inhabitants and doesn’t just have traditional bus routes, but also runs school buses, rapid bus lines, a BRT system, a night bus line, not to mention a Metro connection and five lines for on-demand transport. All in all, the network covers more than 18 million kilometres annually.