The manufacturer is not specified, but according to Akasol words it’s the “one of the world´s leading commercial vehicle manufacturers”. And it’s “globally operating”. What the battery supplier announces is a high three-digit million-euro range follow-up order.

From 2021 until the end of 2027 the company will supply the third generation of high energy battery systems for various electric vehicles of the customer. This model will be able to store twice as much energy than the first generation in the same size.

This order safeguards Akasol’s dynamic growth within the upcoming years, the supplier highlights. The total order backlog rises to approx. EUR 2 billion until 2027. 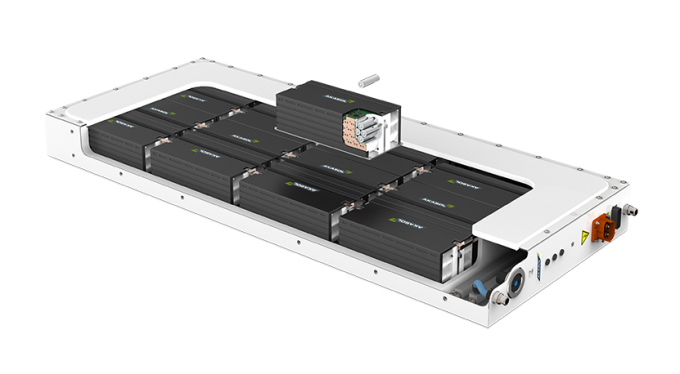 In its press release, Akasol (also supplier of Mercedes for the eCitaro) specifies that «In February 2019, Akasol expanded the existing framework agreement with the commercial vehicle manufacturer for the delivery of the second-generation battery system in the mid to high triple-digit million-euro range. Due to the successful cooperation, this contract will extend significantly». At that time, Akasol pointed out the customer to be Swedish. And it was reportedly stated that the name is Volvo, given that Scania already has an existing partnership with Northvolt.

Akasol already supplies the first generation of the high-performance lithium-ion battery system AKASystem OEM PRC with a storage capacity of 50 kWh to several business units of the customer, the supplier highlights.

It will be followed in 2020 by the second-generation of the AKASystem OEM PRC system with 66 kWh of storage capacity and the same size as the first-generation system but provides approx. 30% more energy and is capable to be fast charged.

From 2021, Akasol will then additionally deliver the third generation of battery systems with very high energy density mainly focusing on range applications, Akasol specifies. The so-called AKASystem AKM CYC has the same geometrical dimension as the two previous generations but with an increased storage capacity of approx. 100 kWh per pack, thus providing twice as much energy compared to the battery systems of the first generation.

Akasol promises twice as much energy in future batteries

How come? The increased storage capacity is achieved by Akasol’s newly developed cylindrical cell module type AKAModule CYC. Depending on the installed storage capacity the new battery system technology enables ranges for electric buses or trucks of up to 700 km in real operation and thus meets almost all electrical range requirements of the commercial vehicle industry, according to Akasol. Additionally, the third generation also remains capable of fast-charging and can be charged at up to 500 kW.

Carsten Bovenschen, CFO of Akasol AG, said: “We are pleased to extend our successful long-term cooperation with the major customer from the commercial vehicle industry, and see ourselves as an important supplier of high-quality, reliable lithium-ion battery systems. The volume of this new contract increases the total order backlog to approx. EUR 2 billion by 2027. That supports Akasol’s long-term expansion plans as well as advanced investments in organization, infrastructure, and production capacity. Due to the significant increase of the order backlog resulting from the most recent order for the new system generation, the Company prepares for possible shifts in the execution of existing serial projects and thus is currently conducting a detailed analysis of the short-term targets for 2019.”