The SYTRAL (Lyon Metropolitan transport authoriry) released on friday 14th september 2018 his strategy to be compliant with the French environmental law which comes into force in 2020. The electro-mobility, with two different technologies get the widest share. 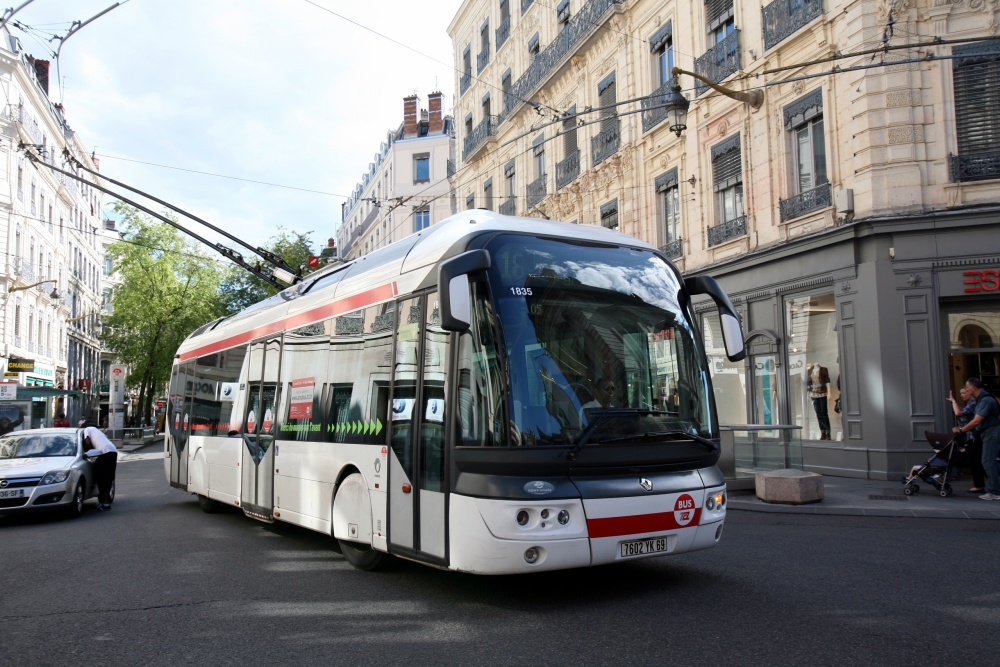 After Saint-Etienne Métropole in july 2018, it is now to the SYTRAL in Lyon to announce the choice in favour of trolleybuses. The new generation of trolleybusses with In Motion Charging will represent an important part of the tenders to come on 2020 and beyond. In fact, six new lines will be fitted with such machines, a significant number of them re-using previous wires non currently operated with trolleybusses (in total twelve lines will be operated with trolleybuses, this bringing the TCL network in the top 5 in western and central Europe using such technology). In 2020, the C13 line will be operatend with 20 new articulated IMC trolleybusses.
The current fleet (130 machines, mainly Irisbus Cristalis standard 12m and articulated 18m plus 7 Midi 10 m from Hess) is now retroffitted in order to reach the 20 years in operation (the Cristalis are focusing the attention).

The debut of electric bus in Lyon

In Lyon, the real novelty will be the introduction of electric buses with batteries. Two ways of charge will be used: night charge for the 13 lines to be equipped before 2025 and 53 lines using both night charge and opportunity charging. The first to be fully equipped with battery busses will be the line C16 in 2020. The SYTRAL did some tests on two lines (the hilly 45 and the C7 which represent the daily average mileage in operation on the TCL network ; tests ran without passengers) with several battery buses (Yutong E12LF ; Irizar i2E ; Heuliez GX337 ; BlueBus 12m ; Solaris Bus new Urbino12 Electric ; Ebusco Electric Citybus 2.1 ; Alstom Aptis).

But there also CNG buses. And the hydrogen?

Gas fuels are also on the list: CNG and bio-CNG will be present in the energy-mix. SYTRAL doesn’t give a detailed situation but four depots are identified as compatible with the implementation of a CNG gas station. As the main lines coming into the heart of the conurbation will be operated with electricity, we can bet that such CNG busses will run on the suburbs. The hydrogen will be tested on real commercial use on the line Zi6 (south of Lyon, to the chemical complex of Saint-Fons) before 2022. The hydrogen will be supplied by the CNR (Compagnie Nationale du Rhône), a subsidiary of Engie. With such measures, SYTRAL will be fully compliant with the 2025 target planned in the Loi de Transition énergétique voted in July 2015 as early as 2020. In environmental terms, this strategy saves 2 000 000 liters of diesel fuel per year. In terms of cost, it represent an investment of (roughly) 200 000 000€ between 2020 and 2025.