Not on the roof, neither on the back. Rafako puts the battery packs in the chassis. The unveiling of the Rafako Ebus prototype represents a two-way innovation: it is the first step in the world of electromobility taken by a company that mainly deals with power generation and it shows a solution (battery packs integrated in the chassis) that is an absolute unicum in the current electric bus market. 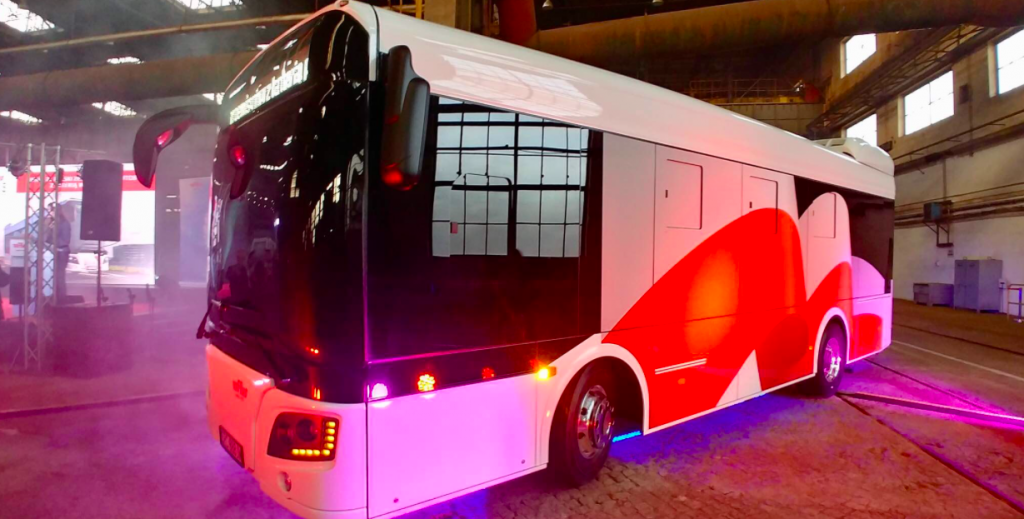 Rafako is based in Racibórz, 150 km west of Crakow. The company belongs to group PBG and is a leader on the Polish power generation equipment and EPC market and the biggest boiler producer in Europe. And right now it’s developing activities related to the renewable energy and electromobility field.

In this framework take place the showcase of the Rafako Ebus prototype, that the company claims to be the first European electric bus with battery in the chassis. The Rafako Ebus has been also presented during COP24 conference in Poland.

The vehicle is a single-decker Midi bus (up to 10.5 metres in length) for use in urban public transport. The majority of the vehicle’s components was designed and built from scratch, explained Michał Maćkowiak, Rafako head of innovation, during his presentation in Katowice.

Placing the batteries in the chassis allows to free some space in the roof in order to place additional solar panels. Moreover, it makes possible to set the height of the vehicle to 3.2 meters (just as an example, the eCitaro is 3.4 meters high).

«The skeleton of the bus by Rafako is made in self- supporting technology of light, perforated and bent stainless steel elements as well as light and durable elements made of polyester laminates» said Maćkowiak. According to Rafako, this project allows a reduction of the weight up to 10 per cent, so that 5 per cent more passenger capacity (or 10 per cent more range) can ben achieved. And the bus stability, Rafako claims, is 20% greater than the version with batteries installed on the roof, given the lower center of gravity.

The battery packs are realized in modular way, in order to be replaced with more modern and technologically advanced ones when the technology will be mature. Two kinds of battery arrangements will be provided in the 8.4 meter bus, the one presented in Katowice: the school and suburban version will be equipped with 144 kWh NMC battery. The city version of the Rafako Ebus will be equipped with 61 kWh LTO battery, that according to Rafako can be fast charged up to 90 per cent in just 15 minutes. The bus is moved by a central synchronous with permanent magnets. The output? 140 kW.