Gdynia, the city of trolleybuses. 30 pieces tender to Solaris

The city hall of Gdynia, in Poland, has signed a contract with Solaris for the delivery of 30 trolleybuses worth over 22 million euros in total. Thanks to Solaris’ winning bid, the fleet of PKT will welcome in its ranks a batch of articulated Trollino 18, although the order also consists of Trollino 12 which are well-established in Gdynia. The city was the buyer of the first trolleybus produced by Solaris in 2000. The city “born out of the sea and dreams” also claimed the trolleybus number one thousand and one manufactured in Bolechowo near Poznań. 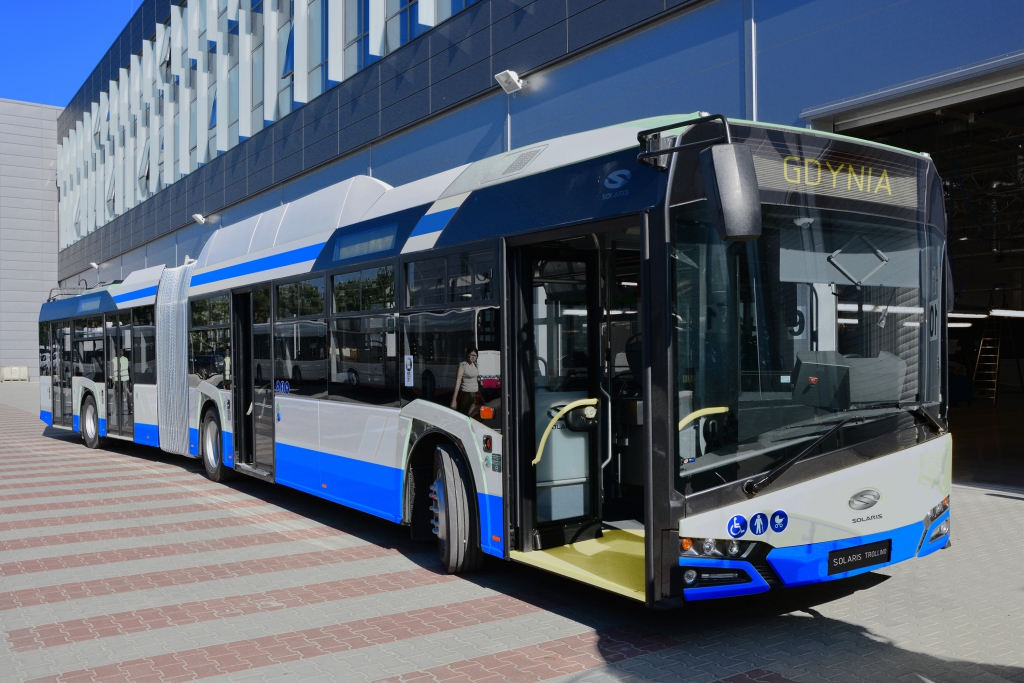 Additional batteries for the trolleybus by Solaris

Apart from featuring traditional trolleybus drivelines, the Solaris vehicles commissioned by Gdynia will be fitted with additional batteries which enable driving off the traction line. In the case of the 14 Solaris Trollino 12 trolleybuses, the batteries will have a capacity of 58 kWh, whereas the 16 articulated vehicles will be equipped with 87 kWh batteries. This means that both types will be able to cover a distance of dozens of kilometres in zero-emission mode without the use of a pantograph. Thanks to this solution the trolleybuses for Gdynia will be able to run in areas of the city where there is no trolleybus traction line.

In addition to trolleybuses, under the contract, the company will also provide batteries that will allow the modernization of 21 other vehicles. Replacement of nickel-cadmium batteries with lithium-ion ones, together with appropriate power electronics, is a huge technological leap, which will allow for a zero-emission ride circa 15-20 kilometers without connection to traction. Modernization of trolleybuses begins this spring, while the supply of the trolleybuses to Gdynia will begin in September this year and shall be completed by spring 2019.

The city of trolleybuses

«Trolleybuses in Gdynia have become a recognisable quality brand for green transport. Once this order is carried out, we will be able to replace buses on some lines with trolleybuses. Thanks to the batteries, these will manage to ride also on routes lacking traction lines. The new trolleybuses will feature air conditioning, will be accessible for persons with physical disabilities, whereas the large and easily legible screens and internal CCTV cameras will improve the safety of passengers» says Katarzyna Gruszecka-Spychała, deputy Mayor of Gdynia. «Moreover, the new articulated vehicles, which are only now debuting on Gdynia’s street, will carry nearly twice as many people as standard vehicles at a comparable cost of operation. Thanks to the new electric vehicles, over 1/3 of the passengers using public transport in Gdynia will travel by trolleybuses»
Today Gdynia is, next to Lublin and Tychy, one of the three cities in Poland to have kept their trolleybus infrastructure and are developing it. For its achievements in this matter Gdynia has won numerous awards both in Poland and abroad. Among others, in 2014 the Przedsiębiorstwo Komunikacji Trolejbusowej operator was declared the winner of the prestigious Regiostars prize which is awarded by the European Commission for “investments in sustainable urban public transport”.