Solar energy to power the tram network. It is happening in Melbourne, where the Numurah Solar Farm, just opened, prides itself to be the largest facility in Victoria state (Australia). It will generate 255 GWh of clean energy each year. 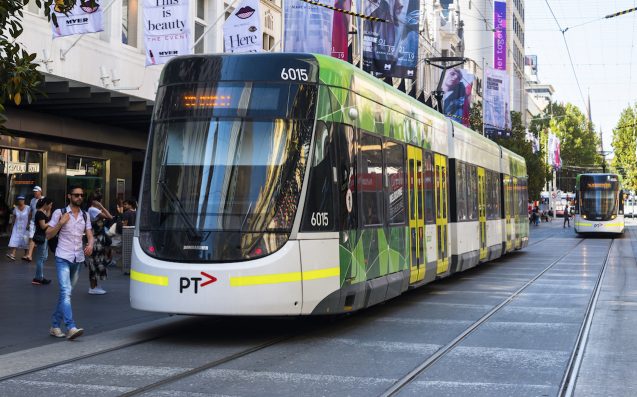 The 128 MW Numurah Solar Farm covers 515 hectares with some 374,000 solar panels. It is owned and developed by Neoen, a French renewable energy producer, and was built at a cost of some 200 million dollars (an investment partially funded under the Victorian Government’s Solar Trams initiative).

Its energy production of 255 GWh yearly, put together with the Bannerton Solar Farm owned by Foresight Solar Fund, is enough to power entirely Melbourne tram network, composed by 450 trams on 28 lines. Also the Laverton Steelworks factory will run on clean energy.

The carbon emissions reduction is estimated to be equal to removing 75,000 cars from the road or planting 390,000 trees, according to Victoria government.

Victoria Minister for Energy, Environment and Climate Change Lily D’Ambrosio, said: “The Numurkah Solar Farm will play an important role in supporting the transformation of our energy system towards clean, renewable energy and reaching our renewable energy target of 50 per cent by 2030.”

Bratislava is ready to modernise its trolleybus fleet. To do so, it has commissioned Skoda Transportation Group and Solaris, which together have won two tenders for the supply of 23 bi-articulated trolleybuses and 16 three-articulated trolleybuses with high passenger capacity. The value of the two o...
A consortium comprised of Solaris Bus & Coach, Solaris Czech and Škoda Electric (with the latter leading the group) has submitted a winning bid in a trolleybus tender concerning the delivery of 20 bi-articulated Trollino 24, held by the Prague public transport operator Dopravní podnik. This is t...
Salzburg AG has just ordered 13 new battery-powered trolleybuses from Hess. They are expected to be delivered in 2023 and 2024. This will bring the Hess fleet in Salzburg to 42 vehicles. In addition to the delivery of vehicles, the contract also includes the maintenance of the vehicles by Hess in Sa...
by Stefano Alfano Nancy has placed an order with Hess of Bellach (GH) for 25 double-articulated trolleybuses of the Lightram 25 model, which are already in operation and performing very well in Swiss cities of Bern, Zurich, Lausanne, Lucerne and St. Gallen. The French town, with a population of arou...