Along with the first orders of battery-electric buses (with 23 vehicles ordered in early 2020), TMB Barcelona bets on gas-powered hybrid buses. A tender for 46 buses is out, the operator announces. 16 of them will be articulated.

Last year, TMB Barcelona secured an order for as many of 105 MAN Lion’s City: 75 buses are equipped with natural gas drive, 30 with diesel engine and mild hybrid module (called MAN EfficientHybrid), a novelty launched by MAN together with the new urban range. The same German manufacturer won a tender for the supply of 40 units of gas hybrid buses to TPER, public transport company of Bologna. 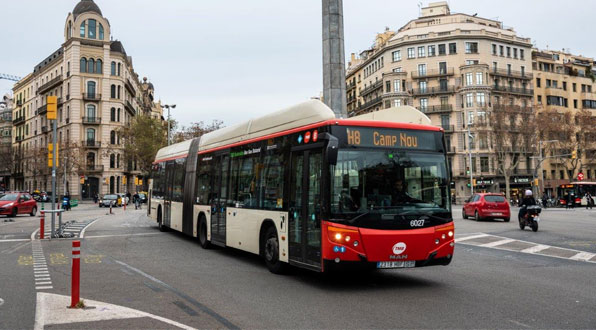 These buses are set to replace a batch of 15-years old buses that are arriving at the end of their useful life. It is the first time that TMB launches a specific tender to incorporate new buses that combine electric motors and CNG engines. This technology is today available only on mild hybrid concepts, for instance offered by Mercedes and MAN. Mercedes won last year a tender in the Netherlands for 83 Citaro NGT hybrid solo buses and ten Citaro G NGT hybrid articulated buses. The first orders for this model were signed at the beginning of 2019.

The tender for 46 new hybrid gas buses for TMB is split into two lots. The first consists of 30 12-meter vehicles, while the second consists of 16 articulated units, 18 metres long. With regards to safety concerns, they will be equipped with a driving assistance system based on front and dead angle sensors, which will be active at all times and will generate sound and visual alerts in case of imminent risk of impact, running over or collision.

No electric minibuses found, now the tender is on diesel ones

TMB Barcelona has also issued a tender for 16 minibus that will replace the older vehicles of the Bus del Barri service. A first tender for this size of bus had been issued in 2019 and was focused on electric minibuses. Anyhow, the tender failed «due to the lack of bids able to meet the requirements of range and performances», TMB highlights. Therefore, the new tender is for diesel Euro VI vehicles.

The purchase of the 52 new buses, with a basic budget of 21,3 million euros, joins the above mentioned contract for the purchase of 23 articulated buses, 100% electric, for an import of 20,7 million euros. Thus, orders have been placed for 75 new buses thanks to a 42 million euro investment. The awarded manufacturers are expected to deliver them in the first quarter of 2021.

The mayor of Rome, Roberto Gualtieri, and the councillor for Mobility, Eugenio Patané, accompanied by the director of the municipal operator ATAC, Giovanni Mottura, took part on the 22 December at the delivery cerimony of 70 new mild hybrid buses at the Portonaccio depot (they follow a first batch o...
Mercedes-Benz handed over five eCitaro buses to Bremer Straßenbahn AG (BSAG), and immediately afterward the transport company ordered another 15 Mercedes-Benz eCitaro as well as 24 Citaro G hybrid buses. BSAG received 65 Mercedes-Benz Citaro (solo and articulated buses as well as Citaro G hybrid bus...
Solaris has won a tender for the supply of 161 Urbino 12 hybrid buses, together with an 8-year maintenance service. The tender was issued by Opérateur de Transport de Wallonie (OTW), a public transport operator from the French-speaking part of Belgium. The vehicles will make their way to Wallonia in...
Irizar is set to debut in the LNG Class II and coach segment as it announces it has manufactured the first LNG i4 model, for intercity or short distance routes. Manufacturer claims a range of more than 1,000 kilometres. This option is an addition to the range of technologies and sustainable fuels th...