Electromobility is step by step becoming Solaris‘ core business, but gas is also a source of satisfaction for the Polish manufacturer. At the beginning of the year, the company delivered the first pre-series Solaris Urbino 18 CNG to RATP. The framework agreement includes the delivery of up to 48 vehicles, with a 20 million euros budget. RATP has just ordered the first part covering 18 buses. The big player in RATP fleet, with regards to gas fuelled buses, is Iveco Bus, that recently won a tender with 150 Urbanway Natural Power. 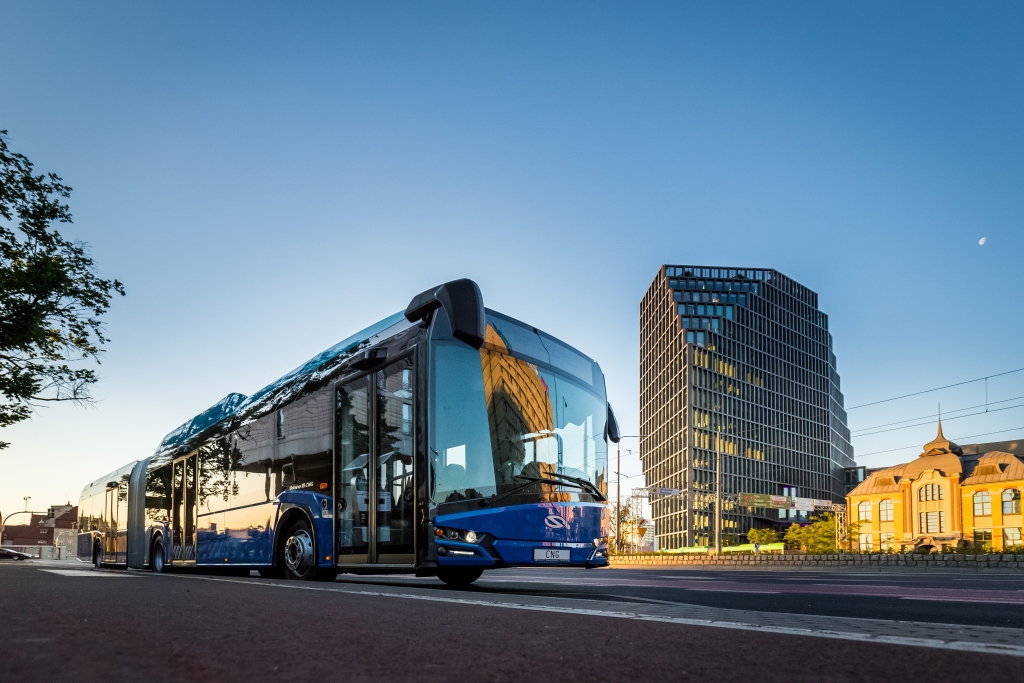 The Solaris Urbino 18 CNG, will arrive in the French capital at the turn of May and June 2019. The value of this first tranche of the contract is nearly EUR 8 million. The articulated Solaris buses will be driven by engines dedicated to work with CNG fuel and automatic gearboxes equipped with the Eco program, Solaris points out in a press release. This configuration of the propulsion unit will allow to obtain significant ecological benefits by significantly reducing the emission of harmful exhaust gases into the atmosphere.+

Range up to 400 km with one fueling

Five compressed natural gas storage tanks, with a capacity of 340 liters each, will be placed on the roof in the front of the vehicle. Such an amount of accumulated fuel (totaling 1,700 liters), assuming a reserve guaranteeing the minimum level of gas concentration, allows to drive about 400 km on one fueling. For safety reasons, the filling circuit will be equipped with a pressure gauge to control the pressure in the tanks and the CNG drive system itself will meet the most stringent safety standards. The experience of Solaris Bus & Coach S.A. in the construction of gas-powered vehicles dates back to 2004. Since then, the company had delivered nearly 1,100 vehicles of this type, which can be met on the streets of 13 European countries, from Sweden through Central and Eastern Europe to France, Spain and Italy. 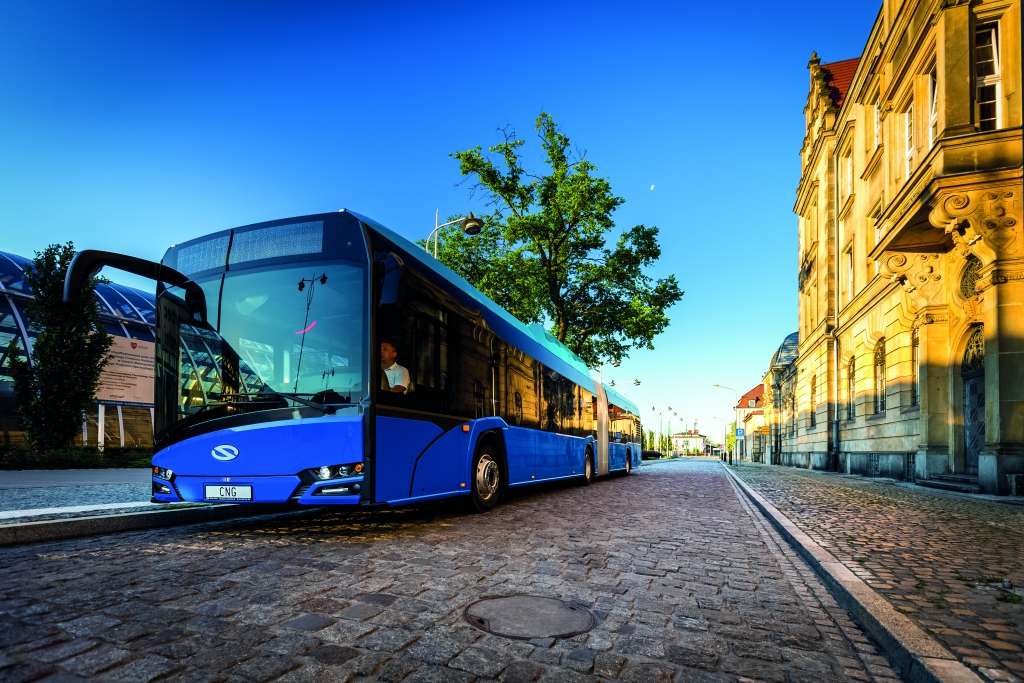 An equipment for RATP

The articulated Urbino for RATP will be equipped with air conditioning, an extended version of the fire extinguishing system and transparent elements illuminating the interior of the vehicle. At the customer’s individual request, an anti-attack, closed driver’s cabin will also be installed. There will furthermore be an extensive monitoring system consisting of 8 cameras and a 10.4-inch monitor of the door monitoring system and a preview of the zone behind the vehicle. The Polish manufacturer will also install a passenger information system, which will include direction boards, internal LED monitors and voice announcement of stops. The RATP’s Solaris Urbino 18 CNG will offer four pairs of double doors installed in the 2+2+2+2 system. Each of them will have passenger counting gates installed. The bus will accommodate 101 people at the same time, including 36 seated. For people with reduced mobility, there will be a kneeling function of the vehicle at the bus stop and an electronic ramp to facilitate the entry of a wheelchair or a stroller. 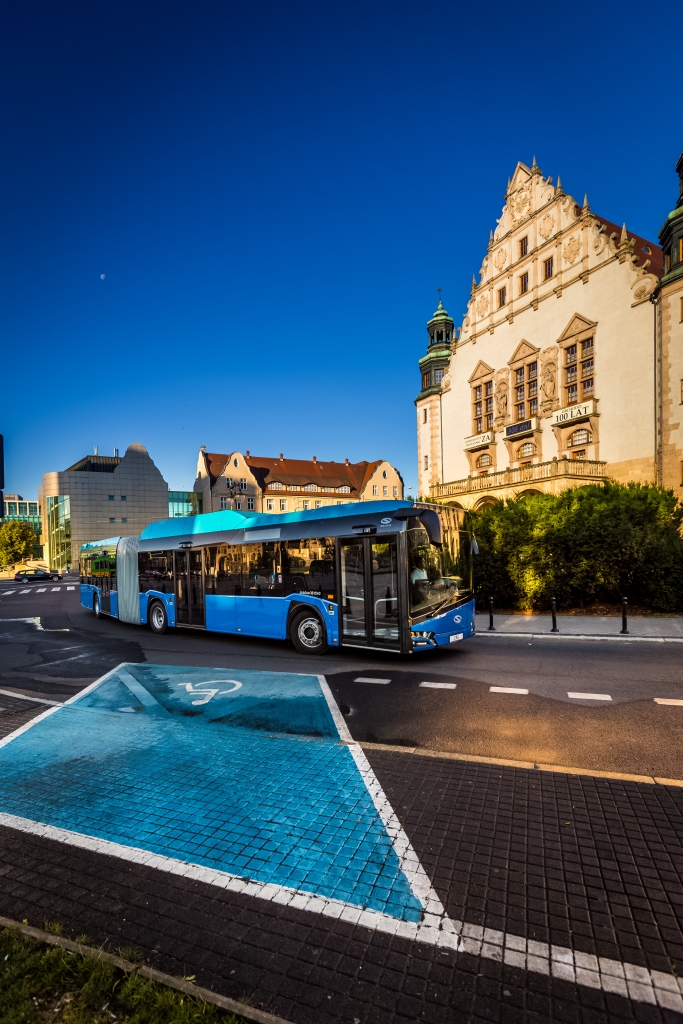 Consip (the central purchasing department of the Italian public administration) has awarded the framework agreement for the supply of CNG-powered buses for central/local governments and public transport companies. The winners were Scania (Italscania), Industria Italiana Autobus, Iveco and Otokar. Th...
Iveco Bus launches a new-generation mild hybrid bus range, available in Natural Gas and XTL renewable fuel versions. The biomethane-compatible Urbanway, the first model in the brand’s offer to benefit from this technology, is on preview at EuMo 2022 in Paris, one of the main public transport e...
Irizar is set to debut in the LNG Class II and coach segment as it announces it has manufactured the first LNG i4 model, for intercity or short distance routes. Manufacturer claims a range of more than 1,000 kilometres. This option is an addition to the range of technologies and sustainable fuels th...
The North County Transit District has exercised options for 50 Xcelsior compressed natural gas buses, converted from New Flyer’s backlog. The first option conversion occurred in 2020 with 20 buses ordered, with the remaining 30 ordered in 2021.  CNG buses for NCTD The options are part of a five-year...