An electric powertrain developed in order to repower Van Hool coaches converting them to zero emission operations. The product will be offered to the North American market by ABC Companies (Van Hool distributor in North America) together with Lightning Systems. The latter is a Colorado-based developer of electric drivetrains for commercial vehicle fleets.

This is the first joint project between the two companies. The electric powertrain will be suitable to repower off-lease Van Hool models including a T2145 highline touring coach and a TDX high-capacity double-deck coach. At Busworld Europe 2019, Van Hool also launched an electric model for the US developed together with Proterra. 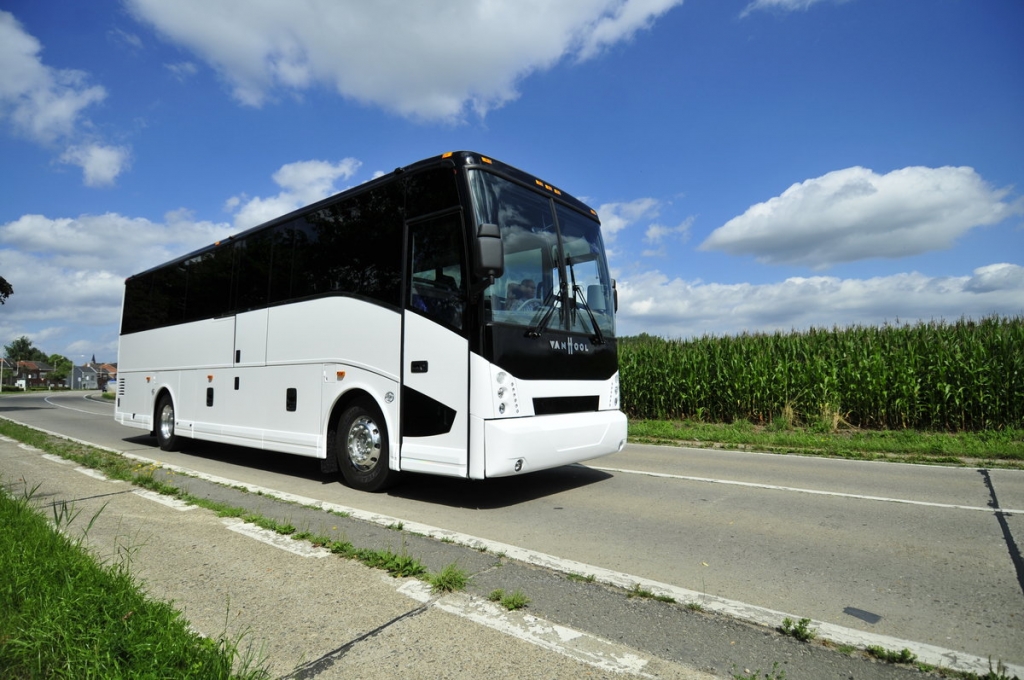 A kit to replace diesel engine and transmission

The ABC/Lightning Systems repower program is currently the only repower option available for coaches in the United States, the companies claims. The partnership was forged by a shared vision to offer a more economic zero-emission option, within a shorter timeframe.

Lightning Systems electric drivetrains are designed to replace a vehicle’s diesel engine and transmission, utilizing a proprietary engineering approach that enables vehicle propulsion through its existing drive shaft. The repowering kit include NMC battery packs (capacity is not specified, but producers mention a 200 miles range).

Moreover, the Lighting Systems integration also ensures that the driver’s environment and driving experience are both familiar and elegant. For example, the dials on the dashboard are updated to reflect the vehicle’s electric operation, and vehicle creep is implemented to make slow-speed maneuvering consistent and familiar, the companies explains.

Extending the life of a coach thanks to repowering

“Adding zero-emission capability to late model coaches is a solution that is good for operations, the environment and the bottom line for many customers,” said Roman Cornell, president and chief commercial officer, ABC Companies. “By converting from diesel to electric, we can extend the operational life of a quality motorcoach, while allowing customers to leverage their current investment in many of the parts, service and training already in place to support their existing fleet. It is a smart way to integrate zero emissions into a motorcoach fleet.”

“A repower is a cost-effective and timely solution for operators,” said Tim Reeser, CEO of Lightning Systems. “It is a dramatically lower cost solution for those looking to integrate an electric coach versus buying new, and can also net significant operational savings associated with fuel and maintenance cost reductions.”

“It goes beyond the electric powertrain,” Reeser adds. “Lightning Systems and ABC are providing a fully integrated and highly serviceable engineered solution, taking into account changes in weight distribution, a lower center of gravity, and other elements designed to optimize the performance of the repowered motorcoach. Beyond the partnership on the product itself, we also believe that ABC’s nationwide service and support network is key to building confidence with customers that together we can support their electric commercial vehicles and scale at the fast rate the market is projecting.”

Europe, repowering in the spotlight

In Europe the topic of repowering diesel buses with electric drivetrain is the target of two recent new ventures. The first has been launched at UITP Summit 2019 by e-troFit, a subsidiary of Munich-based tech company in-tech, who presented a retrofit solution for city buses (and, why not, trucks). The first deliveries are expected to happen in the 4th quarter of 2019. To date, the e-troFit kit is available for Mercedes Citaro only. As a system supplier, ZF supplies powertrain components for the e-troFit kit.

The second iniziative comes from Ziehl-Abegg, which is suppling its electric drivetrain for the retrofit operations held by the German consortium “I see electric busses”, whose target is to convert city buses into all-electric vehicles. In October 2019 , a converted MAN bus, with new electric drive (the so called Ziehl-Abegg ZAwheel), took passengers on a test drive around Busworld in Brussels.

A regular air conditioning service on board public transport vehicles is a very important comfort for users-passengers taking the bus, subway or train, in all weather conditions. from the cold of winter to the heat of summer. An air conditioning unit not only contributes to passenger comfort, but is...
New sliding door for buses by Spanish Masats: the 028d Slim model has been developed to solve space problems in some vehicles (particularly two-story vehicles or the new autonomous vehicles) even though it’s appropriate for all types of urban buses, as the supplier points out. Masats 028d Slim slidi...
Forsee Power has inaugurated its production plant of battery systems in Poitiers (France). It consists of more than 15,000 sqm with more than 200 employees and 5 assembly lines with a production capacity of nearly 1 GWh (more than 2,500 bus batteries per year). The goal is to reach 4 GWh by 2027. Th...
Key powertrain component manufacturer Dana and Lion Electric have just announced strategic supply relationship. Dana will supply the electric drive systems, including electric motors, inverters, and controllers, as well as axles and driveshafts for all Lion Electric platforms, including the LionA, L...