Electric bus. Their name is Solaris Urbino 12 Electric, they wear a nice white and purple “dress” and they are the first units of battery electric bus ever delivered to Romania. Up to now there are 11 of them on the road of Cluj-Napoca, but the order could be extended to 41 in three years. 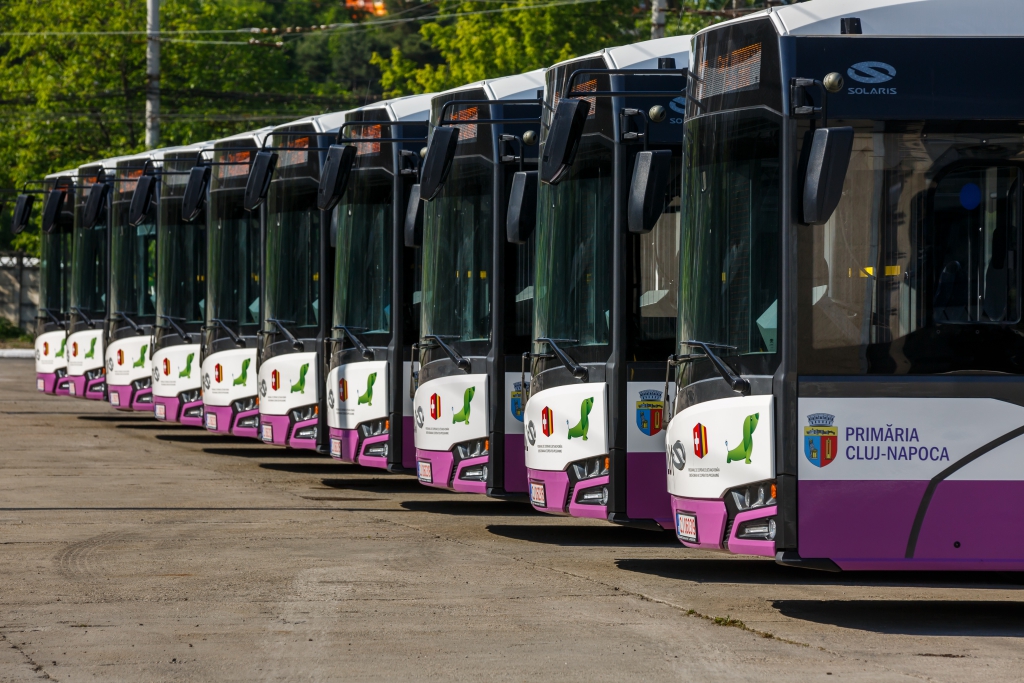 Solaris Bus & Coach, the company states in a press release, has completed the delivery of 11 electric buses (equipped with pantograph) to the Romanian city of Cluj-Napoca. The supplied Solaris Urbino 12 electric constitute the first part of the order that can be optionally extended to the total of as many as 41 buses in the period of the coming three years. The city authorities have already ordered further 12 buses of the same model from the Polish producer, to be delivered to Romania by the end of 2018.

An electric premiere for Romania and electric bus

The eleven units of Urbino 12 electric bus supplied by Solaris to Cluj-Napoca are the first emission-free battery vehicles in Romania. It is, therefore, not surprising that the Mayor of the City, Emil Boca, and the Polish Ambassador in Romania, Arkadiusz Michoński took part in the ceremony of vehicle handover. The event was also participated in by the Ambassador of Switzerland in Romania, as the electric buses were purchased under the Swiss-Romanian Cooperation Programme. CTP Transport Company which will become the operator of the electric bus was offered by the manufacturer from Bolechowo vehicles with similar parameters to the model that won in the prestigious competition Bus of the Year 2017 (first time for an electric bus in that competition).

The electric bus’ motor? Made in Poland

The twelve-meter Urbino electric are equipped with a drive made in Poland. The model commissioned by the Romanian operator has been fitted with a central 160 kW electric motor and 200 kWh traction batteries. Adding electric buses to the fleet meant also investments in the charging infrastructure which involved the construction of 11 slow-charging and two fast-charging stations using roof-mounted pantographs. The buses for Cluj-Napoca feature air-conditioning in the passenger compartment as well as a complete monitoring system on the outside and inside of the vehicle. Furthermore, Urbino electric buses have the option of offering free WiFi access. They can carry up to 78 passengers, including 27 sitting on seats. 10 seats are accessible from the low floor, which ought to facilitate access for passengers with reduced mobility. Solaris Bus & Coach has a long history of collaboration with the country located at the Black Sea coast. The first vehicle (a 12-metre Trollino) produced for the Romanian operator left the Bolechowo factory gates over 15 years ago, whereas the total number of buses delivered to Romania has already exceeded 200.