It has been the first tender aiming to the electrification of Bvg fleet in Berlin, starting with 30 electric buses 12 meters long. The transport operator is now checking the offers, and preparing a new tender for articulated buses, electric as well, that allegedly will be released shortly. 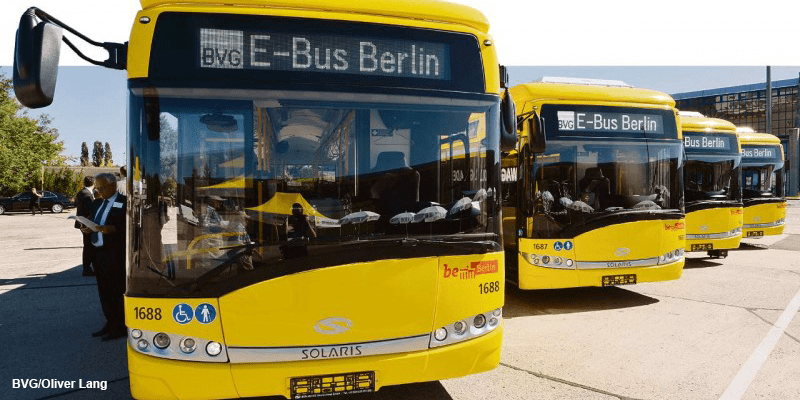 Bvg and the electric pilot with Solaris

At the moment, Germany has about 190 electric buses orded and delivered, the same number as Poland, in a European market composed by 2.106 battery electric buses (with + 279 per cent growth in 2017). European leaders in electric buses are Uk, with 356 vehicles orded and delivered. Netherlands follows with 314, than France with 246. The process hit a few hurdles on the way, as initially not enough participants applied for the contract. Just one manufacturer made an offer. Plus, two others companies asked the transport operator to postpone the deadline. Bvg then extended the bidding period, and in this way it has been apparently able to find enough participants. The new electric buses will join four Solaris Urbino electric that are in operation since 2015 for a pilot.

Bvg ceo now on an info trip to China

The procurement of the 12 m long buses including charging and maintenance infrastructure will begin this year, and the purchase of the first 18 m buses is scheduled for next year. The investment cost stands in the double-digit millions euros for each project. As a demonstration of the strong willingness put by Bvg in the project of fleet electrification, Bvg ceo Sigrid Nikutta is currently on an “Info Trip” to China, where the current efforts to electrify public and private transport are heavily underway. She also announced that the next bid for another 30 buses will begin this summer.

New Flyer and MCI have been named as ZEB partner of choice by nine major transit agencies across America for the FTA’s 2021 Low-No program grants. The two NFI subsidiaries supported successful customer applications for over $40 million in FTA grants, NFI’s best Low-No performance ever in the six yea...
For the third time in a row, Madrid’s principal public transport operator, EMT Madrid, has placed a fleet order with BYD. 20 new 12-metre BYD eBuses make up the latest order and, when delivered, will take EMT Madrid’s total BYD fleet to 65. The contract was formally acknowledged today online by EMT ...
Bluebus is expected to deliver up to 158 electric buses in Paris, following the maxi tender awarded in 2019 and the 2021 framework agreement just signed for a maximum period of 4 years. The French company won the tender together with Heuliez Bus / Iveco and Alstom. Earlier this year, also in the fra...
Solaris has just signed a contract with operator PKM Jaworzno for the supply of 6 Solaris Urbino 18 electric buses. The vehicles will hit the streets of Jaworzno within one year of the contract being signed. Back in 2015, Jaworzno was the first town in Poland to put an e-bus, the Solaris Urbino 12 e...