Olectra bus built with BYD, the production to ramp up. BYD is planning to increase the electric bus production in India to 5,000 vehicles per year from the 2,000 that are built now.

The news has been reported on Business Standard, quoting a statement by Ketsu Zhang, executive director of BYD India. In the country BYD has entered a partnership with Hyderabad-based company Olectra, so that electric buses are built jointly. 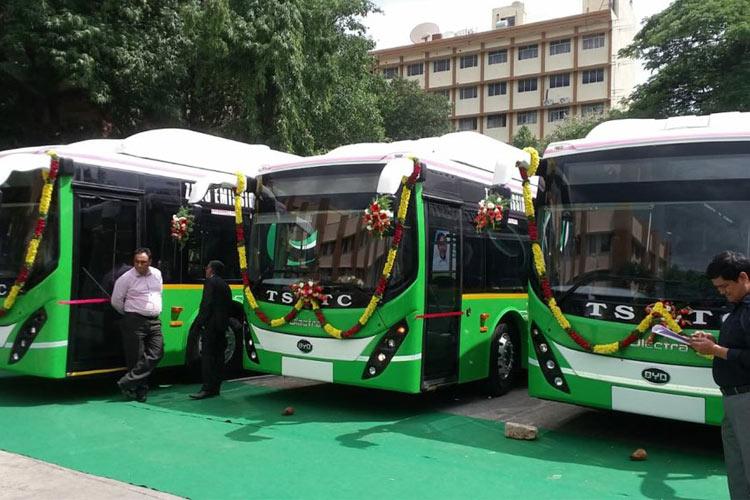 Still according to Business Standard, BYD – Olectra bus units in operation today in India are roughly 200. The 9 meter K9 and the 12-meter K9 are manufactured in India. Also the delivery van BYD T3 will be introduced soon. Planned deliveries for this latter bus are 10,000 units in the next two to three years.

BYD, the largest manufacturer of electric buses globally, has formed a strategic partnership with Olectra Greentech (formerly Goldstone Infratech). BYD is also investing $68.8 million in a manufacturing facility based in Karnataka to help bring down the cost and increase the localisation content of the buses.

Reportedly, in October 2018 Olectra-BYD has signed a contract with the north Indian state of Uttarakhand to deliver 500 electric buses.

A batch of 10 New Flyer electric buses has been ordered in California by the Orange County Transportation Authority (OCTA). OCTA serves 34 cities within Orange County, California, providing transportation to the state’s third-largest county and supporting nearly 40 million passengers per year. The P...
In spring 2022, Ebusco will supply the very first fully-composite, electric buses in the Netherlands. Transdev Nederland has ordered 39 Ebusco 3.0 buses, the manufacturer says, for their city and intercity routes in the Gooi and Vecht region (also 28 VDL e-buses are going into operations). Delivery ...
Genoa City Council has signed the contract that kicks off a revolution in the city public transport system. The municipality has agreed on a deal with a group of companies made of Rina, Systra and Architecna Engineering. The project will be completed by August. The picture above was released by the ...
Clark County Public Transit (C-Tran) in Vancouver, Washington State, has awarded Gillig an order for eight 12-meter battery electric buses and charging equipment with an award value of $9.74 million. The manufacturer has recently secured a 44 e-bus contract in Utah. Gillig electric bus contract with...