Ten e-buses for two zero-emissions lines. But also “zero costs” for passengers, that will travel on these routes for free. Two bus lines entitled “zero emissions, zero costs” have been launched today in Madrid. EMT Madrid is going to operate ten Irizar ie bus battery-electric buses on these two lines running from north to south and from east to west, which will begin operating during the next few days, as announced by the mayor. And EMT Madrid has just published a tender for further 50 e-buses.

The “electric” collaboration between EMT and Irizar began in February 2017 with the arrival of the first generation of the i2e bus in Madrid, an order that was made up of a total of 15 buses. The latest generation of Irizar electric vehicles arriving in Madrid are standard ie bus model vehicles. This time around, Madrid has purchased 20 units containing lithium-ion batteries that are made in-house by Irizar e-mobility in Aduna plant.

EMT Madrid is particulary known for the deployment of CNG powered buses: in late 2018 the public transport company ordered 276 units of the Mercedes Citaro NGT and 184 Scania N-280 CNG. 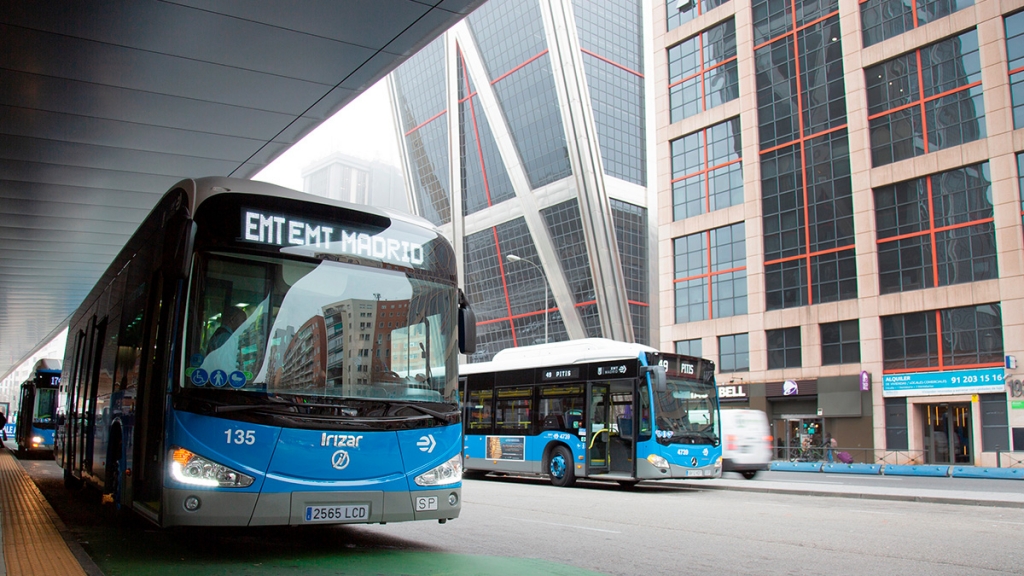 This new service provided by EMT will run exclusively on zero-emission technology. This initiative, driven by Madrid City Council, is a measure that aims to encourage the use of public transportation and sustainable mobility, as part of its Madrid 360 environmental sustainability strategy.

The first line using these Irizar buses and running from east to west will mainly travel around the city’s Gran Vía artery. Its route will extend to the east along Calle Alcalá and to the west along Calle Princesa between Atocha and Moncloa. It will run every six to eight minutes on working days and every ten minutes on Saturdays and public holidays, starting at 7:00 am from the terminals, and the last buses will be at 11:30 pm at Moncloa and 11:00 pm at Atocha.

75 people on board for the Irizar ie bus 12-meter

These ten Irizar buses are completely silent and environmentally friendly and they emit no polluting gases. The Irizar ie bus measures 12 metres long and is equipped with two doors, 28 seats and capacity for 75 passengers. They run on an electric motor of up to 230 kW that is powered by five lithium-ion batteries, providing the bus with a range of between 100 and 150 kilometres according to the manufacturer, depending on the driving cycle and atmospheric conditions, equivalent to 17 hours of travel time in a city with heavy traffic, such as Madrid.

The official presentation of the “zero” lines took place this morning at Atocha at an event aimed at citizens, which was attended by the mayor of Madrid, José Luis Martínez-Almeida, the delegate of the Mobility and Environment Area of the City Council, Borja Carabante, the manager of EMT, Alfonso Sánchez Vicente, and the director of Irizar e-mobility, Hector Olabegogeaskoetxea, among others.

In the words of José Luis Martínez-Almeida, the mayor of Madrid, “We are faced with an initiative with which Madrid continues being a pioneer and leader in terms of having a public transport system that guarantees the mobility of millions of citizens each day, and in terms of sustainability and the fight to reduce pollution”. The mayor added that, with the introduction of this measure, it is plain to see the commitment the people of Madrid have to their city and that, by leaving their vehicles at home thanks to these alternatives, they are able to improve the air quality and turn Madrid into an “example for other cities”.

Hector Olabegogeaskoetxea, the Director General of Irizar e-mobility adds: “It fills us with pride that Madrid has chosen to use our zero-emission buses for this initiative. Collaborating on this project is very important to us. We are fully committed to the environment and we want to contribute to improving citizens’ quality of life. We are the first green energy electromobility plant in Europe.”