Oregon public transport operator TriMet has taken over its first battery electric bus in the framework of a pilot test aimed at evaluating the behavior of electric buses under real conditions.

New Flyer supplied the first Xcelsior Charge electric bus a few days ago. Four other units will follow. Charging infrastructure has been bought and will be maintained thanks to a partnership between the transit operator and the energy provider Portland General Electric. 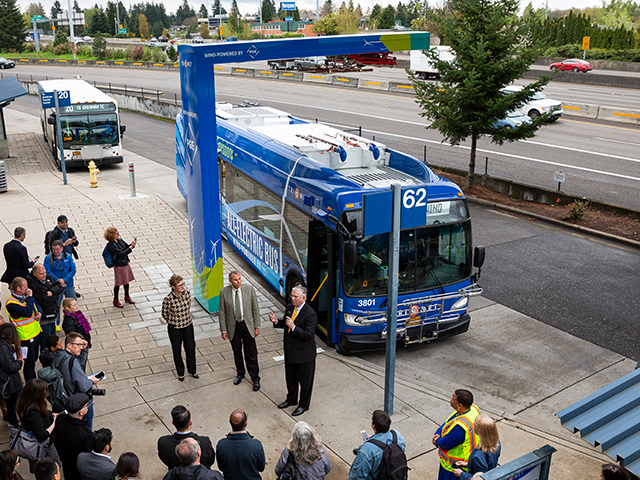 TriMet (that stands for Tri-County Metropolitan Transportation District of Oregon) signed an order for 5 Xcelsior Charge (forty-foot model, i.e. 12 meter) in September 2017. TriMet partnered with Portland General Electric (PGE) to purchase, own, and maintain six ABB chargers and the related infrastructure, New Flyer explains in a press release. The program was funded in part with a $3.4 million grant from the Federal Transit Administration’s 2016 Low and No Emission (Low-No) Vehicle Deployment Program. 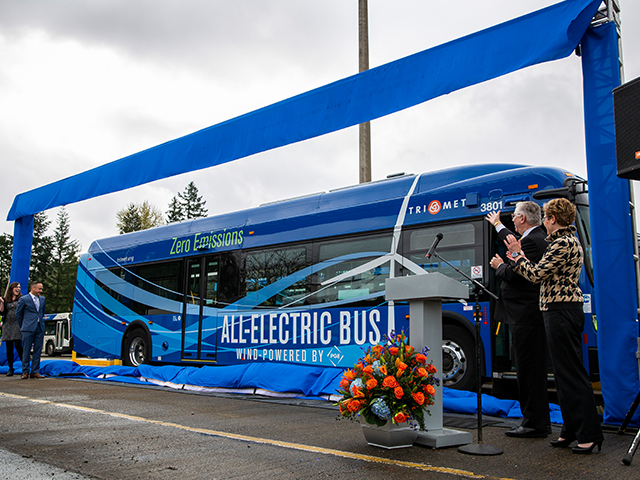 According to TriMet “Non-diesel bus plan”, released in September 2018, «with current battery technology and TriMet’s current bus service schedules, it is estimated that approximately 59 percent of bus routes are compatible with depot-charging BEB technology (assuming a “real-world” range of 150 miles)». The company plans to convert the full fleet to electricity by 2040 (as in the picture below). The plan anyway depends on «successful outcomes during the four-year trial and on the identification of new funding needed after the initial STIF allocation». In this case, «TriMet would discontinue diesel bus purchases in 2023». 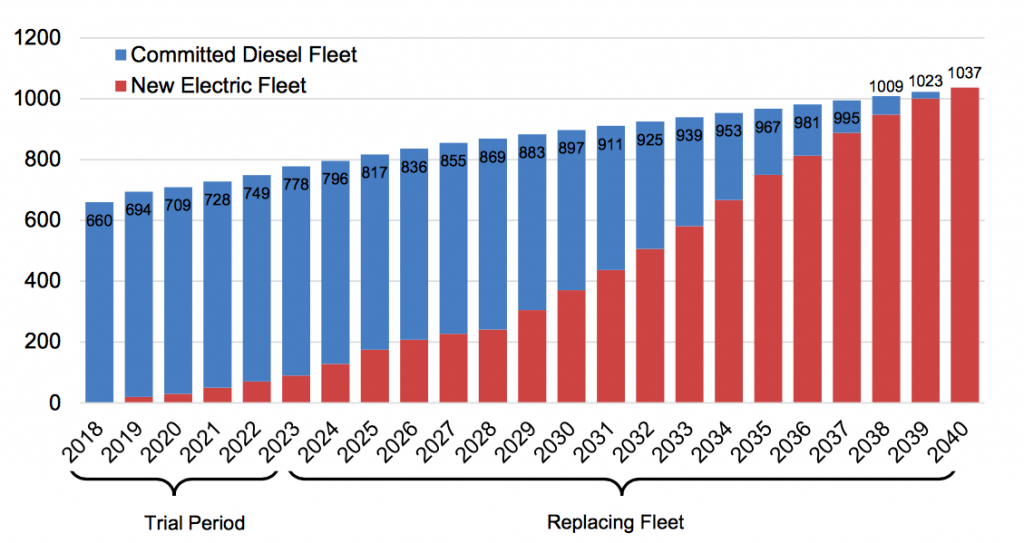 Hybrid buses haven’t been a success

In 2016, Portland was a finalist in the U.S. Department of Transportation (“USDOT”) Smart Cities Challenge, competing to win funds to transform its transportation system with electric vehicle deployment and other carbon emission reduction strategies to foster future mobility solutions. The transit company TriMet already operates eight hybrid buses that were introduced in 2012. However, «while those buses had some advantages, we ultimately didn’t see the performance we needed for us to roll them out system-wide», company says.

The pilot bus will be joined by four additional Xcelsior Charge this summer, creating an all-electric bus route. The buses will operate between the Sunset Transit Center and Washington Square Transit Center, with depot chargers installed at TriMet’s Merlo Operating Facility and one on-route charger installed at the Sunset Transit Center to rapidly recharge batteries each round trip. The five buses will be deployed in the framework of a test in real conditions, on a route operating from 5 a.m. to 11 p.m.

TriMet connects people in the Portland, Oregon surrounding areas, providing over 97 million trips per year. The transit operator has the 11th largest bus fleet in the United States. TriMet operates 658 buses, the vast majority of which (97 percent) are standard 40-foot diesel buses.

“We are tremendously proud to see the Xcelsior Charge bus introduced to the Portland region,” said Chris Stoddart, President of New Flyer. “We congratulate the exceptional teams at TriMet and PGE for successful integration of zero-emission electric buses, along with clean renewable energy, in their transition from conventional clean diesel propulsion to zero-emission buses.”

“Transit inherently plays an important role in reducing emissions and easing congestion,” said Doug Kelsey, General Manager, TriMet. “Now, as our first all-electric bus rolls into service powered by the wind, we are furthering our commitment to the environment and are at the forefront of a cleaner future, both for TriMet and the Portland, Oregon region.”