The fuel cell bus from Toyota has been approved and launched on the market. Sora project, which was officially commercialised, will have its arrival point at 2020 Olympics in Tokyo, when one hundred fuel cell buses are expected to circulate in Japan capital city. 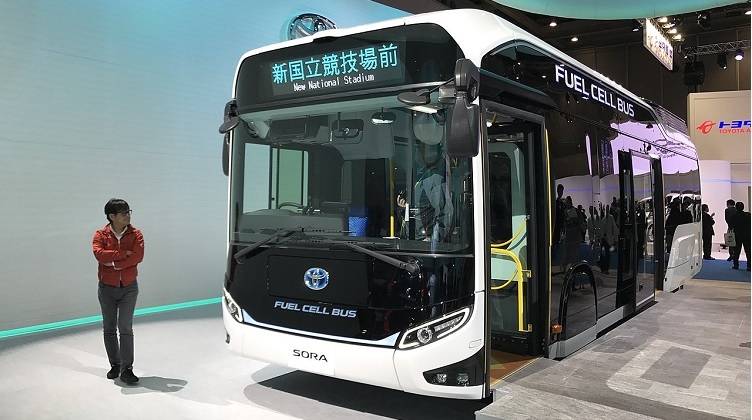 The name Sora is the acronym for “Sky, ocean, river, air”, and therefore recalls the water cycle. The vehicle represents Toyota’s peculiar challenge in the world of zero-emission buses: in a context in which all the major manufacturers are looking to the electric field, which according to estimates will expand its market share disproportionately between now and 2030, the Japanese company is working on a fuel cell bus, a technology that experienced its moment of (apparent) glory a few years ago before being abandoned while waiting for technological advances.

Fuel cell bus by Toyota, from Mirai with love

The Toyota Sora, 10.5 metres long, is based on the Toyota fuel cell system (Tfcs), developed for the Mirai car. It can accommodate up to 79 people, 22 seated and 56 standing, and can be used as an electricity generator if required. A socket on the back of the bus can supply 9 kW of power for over 24 hours. In this way, the company points out, it can be used to evacuate schools and buildings or as a power supply to provide electricity for domestic use. The maximum power developed by the motor is 113 kW for two units.

The Toyota Sora boasts state-of-the-art technology. First, a system of eight high-definition cameras, mounted inside and outside the vehicle, detects pedestrians and cyclists around the bus. At bus stops, the system detects the presence of surrounding pedestrians and cyclists and alerts the driver with audible notifications and images, thus improving safety. In addition, a special system eliminates the risk of sudden accelerations that could endanger the safety of standing passengers. The automatic transmission also eliminates the risk of skidding. led technology was used for the front and rear lights.

In Japan, fuel cell vehicles are provided with strong support from the central government. As the company explains, the development phase and the demonstration tests of Toyota’s fuel cell bus were conducted in the context of the ‘Next-Generation Energy and Social Systems Demonstration’ project defined by the Japanese Ministry of Economy, Trade and Industry (METI) and the ‘Low Carbon Technology Research and Development’ program developed by the Ministry of the Environment. Finally, it was introduced on the basis of the ‘Program for the promotion of public transport with low carbon emissions’ drawn up by the Ministry of Infrastructure, Land, Transport and Tourism (MLIT). Moreover, last year Toyota launched the global initiative “Start Your Impossible”, which marks the beginning of the transition from automotive brands to mobility brands.