Volvo electric buses will break through Australian market in 2022, starting with Perth

Four Volvo electric buses will be delivered to the PTA of Western Australia, as part of the existing 900 supply agreement between Volvo and Transperth which was signed in March 2019. The agreement includes provisions for the introduction of alternative powered vehicles into the public transport bus network when the technology became available in Volvo’s Australian product line. Bodywork will be made by Volgren Australia (that is also partnering with BYD).

Delivery is planned for late 2021. And full commercialisation of the localised electric bus solution for Australia will not be until 2022, Volvo points out. 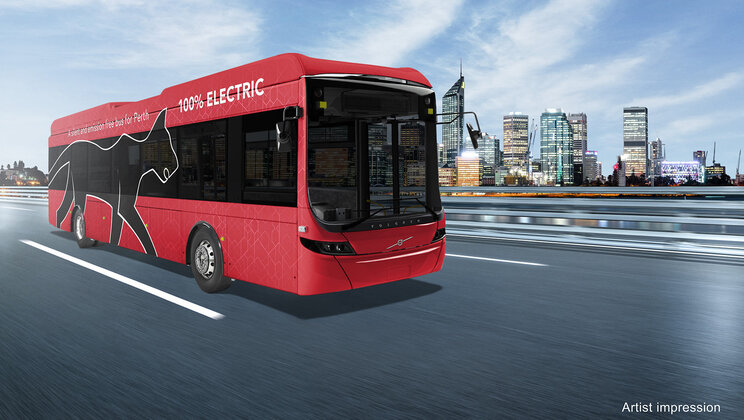 The buses will be operated for the PTA by Swan Transit in Joondalup, Perth’s primary urban centre in the northern suburbs. They will join the existing Central Area Transit System (CAT) in Joondalup, which are zero-fare routes. The first Perth bound bus will be shown to a global audience at the 2021 UITP Global Public Transport Summit scheduled to be held in June at the Melbourne Convention and Exhibition Centre.

Introducing alternate technologies is nothing new for PTA and Volvo. When Volvo came to market with their hybrid buses in 2013, the two parties conducted a successful trial of the bus in Perth – which not only allowed Volvo to prove the concept, but grow hybrid bus sales across Australia.

The units will be all-electric 11.7-metre long, 2.5 metre wide vehicles with local Australian bodies designed and built by Volgren Australia. Whilst these units will be the first of their kind for Volvo in the Asia-Pacific region, the chassis’ are based on established Volvo technology already implemented in Europe.

100 per cent of Volvo buses in Perth bus fleet

“We are excited to be partnering with PTA in Perth for our first electric buses in Australia. Our relationship with the PTA now spans over a decade and in years to come the city of Perth will indeed be a Volvo city with 100% of the bus fleet being Volvo. Volvo’s contract with PTA included a technology roadmap that allowed the PTA to access diesel, self-charging electric and battery-electric vehicles over time. The PTA can access the variety of tools available to them and match the technology to the route and need,” said David Mead, Vice President Volvo Buses Asia Pacific. He added: “Volvo Buses have long been recognised as a leader in electromobility and sustainable public transport. The Volvo electric driveline has been well proven as the backbone for our complete electric buses in Europe where they have been in operation since 2015. By delivering the product in chassis form, we can work with long term partners such as Volgren to assemble the bus here in Australia. It also has allowed us to create new climate options for the vehicle, more suited to Australian conditions”.

“This project is about much more than the buses. We have worked with the PTA on a number of areas including simulating the routes to create our charging strategy, charging infrastructure, understanding capital works needs in the depot, training of staff, safety elements, certification and standards compliance. That means we are creating a scalable, end to end implementation plan that can be replicated in the future,” added David Mead.

“Trialling new, green technology is a great use of our public transport network, already one of the most environmentally friendly ways to get around Perth,” said Western Australian Transport Minister Rita Saffioti. “This is the first time we have trialled electric buses on a CAT route and I’m excited to see what commuters think about this new technology,” she said.