The Zero Emission Bus Conference 2018 brought together 370+ policy makers, bus operators and industry experts to drive forward the realisation of zero emission public transport for Europe. The first edition, that was held in 2016 in London, received 250 registrations: attendees increased by 50 per cent. On November 27th and 28th the second Zero Emission Bus (ZEB) Conference took place in Cologne. The ZEB conference aims to accelerate the adoption of zero emission vehicles by sharing information and experiences and offering guidance in procurement and financing of new fleets. 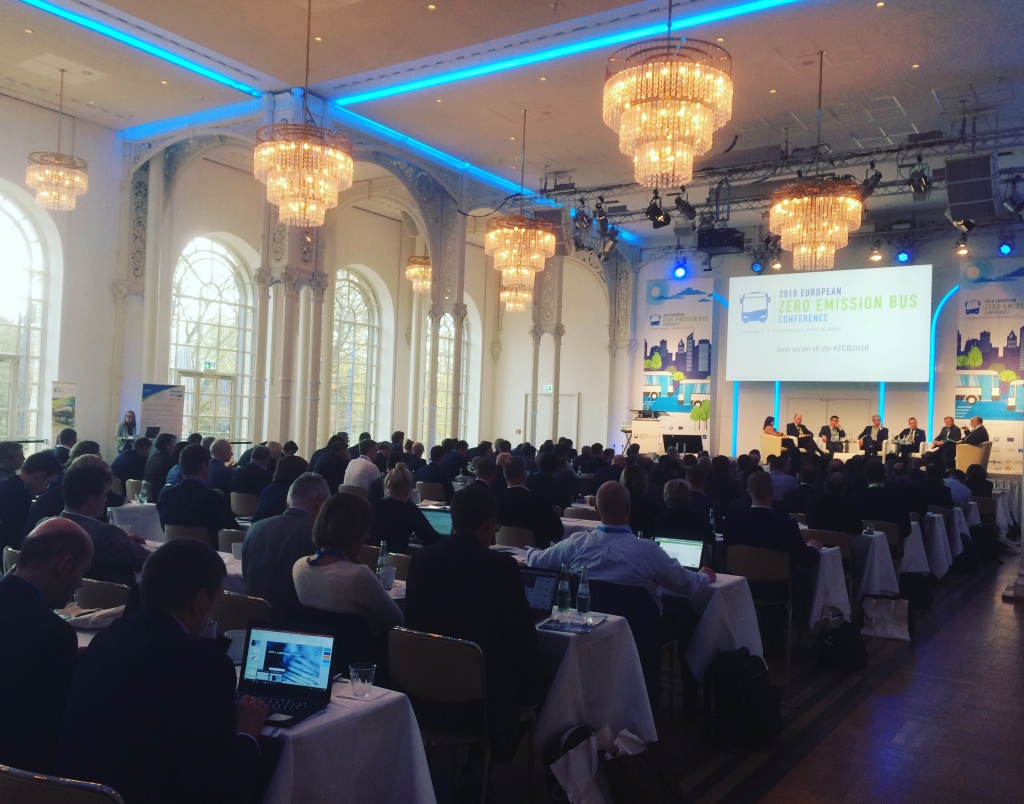 During the two days, European bus manufacturers showcased the readiness level of their zero emission bus options and attendees were able to deep dive into the world of battery and hydrogen electric buses. In the occasion, Nel Hydrogen announced the deployment of 600 buses in Europe in the in the framework of the H2Bus Europe project; Transdev and the Transport Region of Amsterdam (VRA) also announced plans to upscale their zero emission fleets in the upcoming years.

During the conference Mayor Reker of Cologne took the opportunity to sign the Declaration of Intent on promoting large-scale deployment of clean, alternatively fuelled buses in Europe and ceremoniously handed the signed declaration over to Maja Bakran Marcich, Deputy Director General of Mobility & Transport for the European Commission. Ms Bakran commented on the signing: “We warmly welcome the City of Cologne signing the Clean Buses Declaration. We need to move fast if we want to have cleaner and healthier cities for the European citizens. Cities and local authorities have a key role to play to achieve a decarbonised Europe”.

Commitment to the Paris Agreement

Christoph Dammermann, State Secretary of Economy, Innovation, Digitisation and Energy of North Rhine-Westphalia, also emphasized the importance of clean public transport in his speech: “Zero- emission buses help us achieve our long-term goals and commitment to the Paris Agreement. Zero- emission public transport is not just a matter of drive, but also active change management. It is also a question of the operating concept; the regional energy supply, and the occupancy rate of the vehicle.”

The conference is organised by Element Energy and Hydrogen Europe in the framework of the JIVE 2 project. The JIVE 2 project has received funding from the Fuel Cells and Hydrogen 2 Joint Undertaking under grant agreement No 779563. This Joint Undertaking receives support from the European Union’s Horizon 2020 research and innovation programme, Hydrogen Europe and Hydrogen Europe Research. The JIVE and JIVE2 projects, which started in January 2017 and January 2018, will deploy nearly 300 zero emission fuel cell buses and associated infrastructure (under the MEHRLIN project) in 20 cities across Europe by early 2020s – the largest deployment in Europe to date. The buses will be deployed in cities in Denmark, France, Germany, Iceland, Italy, Latvia, Norway, Sweden, The Netherlands and United Kingdom.

Mercedes has updated the NMC batteries on the eCitaro. As previously planned within the Mannheim-made electric bus roadmap, now the Mercedes eCitaro is available with an even more powerful generation of lithium-ion batteries (still from the German supplier Akasol).
The first electric buses with VinBus’ logo has been launched in Vietnam (Vinhomes Ocean Park, Gia Lam). The vehicle is manufactured and assembled at the Automobile Manufacture Complex in Hai Phong, as outlined in an article by Insideevs. VinBus is a subsidiary of Vingroup and was established i...
Konvekta is launching the EmCO2s (pronounced “Emcos”), which is presented as a new, emission-free heating and air conditioning system for the electric bus market. With heat pump function and the alternative refrigerant CO2, the system requires significantly less energy compared to a syst...
Lithium-ion batteries have entered every segment of our lives. From mobile phones and power tools to e-bikes and cars. The race for more energy and more power is on. The main driver behind that race is the progress of technology used in li-ion cells and batteries. The key parameter for any electric ...