Diesel – electric hybrid? Of course yes. CNG – electric hybrid? Why not! Daimler Buses, after the launch of the fully electric eCitaro, walks along on the path of mild hybrid technology. The next step is the Citaro hybrid with natural gas drive. Augsburg, in Germany, ordered 6 units of the Citaro NGT hybrid. The very first Citaro G NGT hybrid will roll out in Oldenburg. The vehicle has been chosen also by EMT Madrid and will be deployed in Lubljana (17 units). 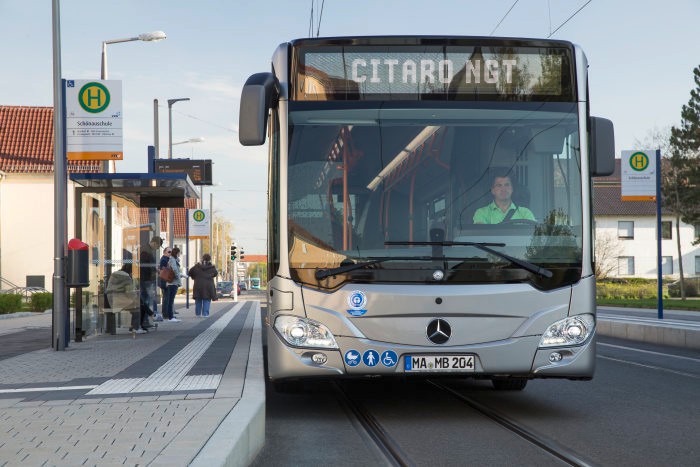 Gas engines emit almost no particulate matter and NOx emissions are also very low, Mercedes points out. That’s why the Citaro NGT becomes a valid candidate in the trend towards more sustainable public transport systems. When used in conjunction with biogas or bio natural gas, the Citaro NGT hybrid is almost CO₂ neutral. Augsburg’s public utilities are turning to this technology with their six new Citaro NGT hybrid buses. In Oldenburg, the VWG transport company will be putting the world’s first Citaro G NGT hybrid articulated bus into operation, and best of all, they will be running it on bio natural gas.

Demand for the Citaro NGT Hybrid, Daimler points out, is high around Europe: in Bourges, central France, the transport company STU Bourges (subsidiary of RATP Dev), has also decided for the Citaro NGT hybrid as well as Spanish providers EMT Madrid and Aucorsa Cordoba (Daimler doesn’t specify the number of units). Finally, in the Slovenian capital Ljubljana this summer, the first of a total order of 17 Citaro NGT hybrid buses will take to the streets.

In the meanwhile, the Citaro Hybrid (with the 14 kW electric machine together with diesel engine) is establishing itself in Italy: 30 vehicles rolled out a few days ago in Florence (where also an eCitaro is running in the framework of a European trial). TPER brought the number of hybrid buses in the fleet to 86: the largest hybrid fleet in Italy. Last purchase, a fleet of 28 Citaro Hybrid, equipped with mild hybrid technology. 19 of them were presented this morning in Bologna, where two routes will be operated only with hybrid buses.