New German contract for the Mercedes eCitaro. ÜSTRA, public transport provider in Hanover, concluded a framework agreement for 48 units of the fully electric Mercedes city bus. The first four already ordered eCitaro buses will be delivered this year already. All of the eCitaro models in this large order are equipped with pantographs for intermediary charging. The agreement is for 30 12 meter buses and 18 eCitaro G articulated buses. 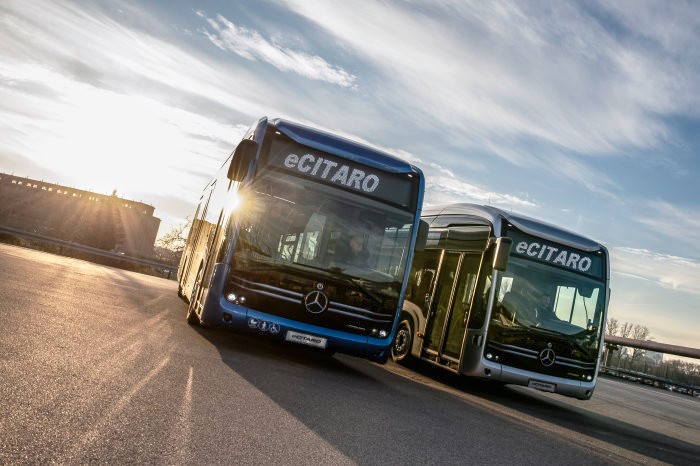 Safety on top on the eCitaro for ÜSTRA

After many orders from German transport companies (Hamburg, Berlin, Mannheim, Wiesbaden…), Mercedes has recently started delivering the first export orders for the eCitaro. 20 electric bus units will be delivered by Daimler Buses in Luxembourg, Sweden and Norway, following a batch of three orders that will bring for the first time the battery powered eCitaro out of German borders.

The Mercedes eCitaro units ordered by ÜSTRA feature ten high-voltage battery packs with a total capacity of 243 kWh. They additionally also feature a roof-mounted pantograph for the purpose of intermediary charging at the terminus of the respective lines.

On the safety equipment side, the vehicles will be provided with Preventive Brake Assist active braking assistance system (the ABA 4 customized for city buses). Also Sideguard Assist on the eCitaro warns the driver when turning off the current road if pedestrians or cyclists are detected on the side of the vehicle to which the turn is taking place.

Hanover’s ÜSTRA transport provider operates 331 metros, 141 buses and four electrically-powered ferries in Hanover, the center of Lower Saxon. The buses cover 38 lines and a total of 672 stops, which amounts to an annual mileage of around twelve million kilometres.

Since 2016, three Solaris Urbino 12 electric are operating in the city. In the next five years, the company aims to completely make the change to electrically-powered vehicles in the city centre. This would allow around 3,800 tonnes of CO2 emissions to be saved on an annual basis, according to Daimler press release. The investment required is around 53 million euros. As reported on Urban Transport Magazine, the public transport company received 22.7 million euros of grants from the federal government and 3.3 million from the Lower Saxony regional transport company (LNVG) provides a total 3.3 million euros.

By concluding this framework agreement of up to 48 eCitaro and eCitaro G models, Mercedes and ÜSTRA will be continuing their collaboration. The manufacturer delivered around 100 Citaro buses of the first generation to ÜSTRA.

“ÜSTRA is rapidly working towards achieving emission-free mobility. We are proud that the eCitaro will be such an important component of their electric bus campaign,” explains Ulrich Bastert, Head of Marketing, Sales and Customer Services at Daimler Buses.

“In Daimler, we are pleased to have found an experienced manufacturer of electric buses, which, by delivering 48 eCitaro buses, will be the basis of our ambitious aim to completely electrify Hanover’s public transport by 2023,” explains Denise Hain, Member of the ÜSTRA Board of Management for Operations and Personnel.