From the end of January three Mercedes eCitaro will be operating in Mannheim and Heidelberg for the operator Rhein-Neckar-Verkehr GmbH. This delivery follows the ones in Hamburg and Berlin. The zero emission bus, equipped with a ZF electric axle (the same adopted by the Solaris Urbino electric), has 243 kWh battery capacity. 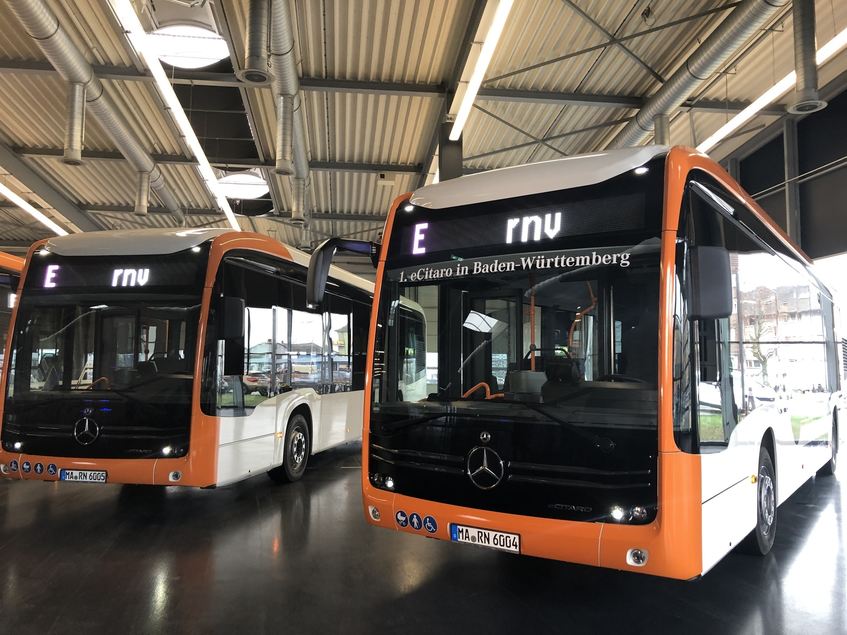 The first eCitaro was delivered a few weeks ago to Hochbahn Hamburg, the first public transport company to place an order for the bus (the public transport company ordered 20 eCitaro buses and 10 Solaris Urbino electric). Berlin received the first unit out of a 15 eCitaro order a few days ago (in the picture below). Now it’s Mannheim’s time. The launch of the eCitaro, in Daimler plans, is the kick-off for an innovation initiative with a clear strategy aimed at the electrification of public transit with the deployment of electric bus in cities and population centres.

eCitaro, a project in evolution…

Daimler is sure that the eCitaro will be able to replace city buses powered by a combustion engine nearly completely in just a few years. Without opportunity charging, the new eCitaro of the year 2018 equipped with up to 243 kWh of NMC batteries already covers, states Daimler, about 30 percent of all requirements of the transport operators. The next generation of the eCitaro will be able to cover, from 2020, still quoting the manufacturer, around 50 percent of all applications, thanks to the second generation of Nmc batteries.

The first electric eCitaro bus service in Heidelberg, Daimler states in a press release, goes from the main train station via the Seegarten to the Karlsplatz and then later to the Altstadt commuter rail station. Bus route 20 travels through Heidelberg’s city centre every 20 minutes, whereby it is expected that in the future two vehicles will cover the four kilometre long route with 12 stops. One of Mannheim’s electric bus routes leaves from Käfertal train station and travels via Wasserwerkstraße to the Franklin district, a new district where members of the US armed forces used to live. The other route begins at the Platz der Freundschaft and ends at the new Taylor industrial estate, which also once belonged to the US armed forces. One eCitaro will be in operation on each route. 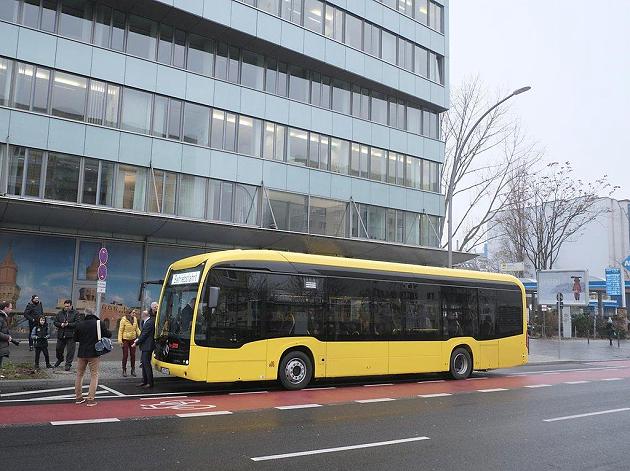 A daily mileage of more than 200 km

In Heidelberg, the vehicles will be on the road between 9.00 a.m. and 10.00 p.m. and in Mannheim between 6.00 a.m. and midnight. This corresponds to a daily mileage of about 200 kilometres or more per vehicle. The bus are equipped with lithium-ion batteries with a total capacity of 243 kWh, the maximum allowed on the eCitaro. Passengers capacity, with this battery size, is up to 88 people. The battery design is modular, comprising 10 modules each with an output of around 25 kWh. In addition to the six battery modules on the vehicle’s roof, four battery modules in the rear take the position of today’s drive system combination of combustion engine and transmission.

Only depot charging for the eCitaro

The target of 200 km or more for each vehicle per day can be achieved with fast charging in the form of top-up charging during breaks in operation. During these breaks another eCitaro will be in operation in Heidelberg and Mannheim. The buses are charged using a Combi-2 plug, located on the right in the direction of travel above the front wheel housing. The charging device has an output of up to 150 kW and is to be delivered to Rhein-Neckar-Verkehr GmbH together with the eCitaro.

A ceremony in Mannheim

Today a ceremony has been held at Mannheim plant, where the eCitaro is produced, in the presence of Till Oberwörder, Head of Daimler Buses, Martin in der Beek, Technical Managing Director at Rhein-Neckar-Verkehr GmbH and local authorities of Mannheim and Heidelberg. “The eCitaro is redefining conventionally driven bus transportation and is for us the symbol for future-oriented local public transport. A holistic approach is very important to us. That is why we have put together a comprehensive package comprising the vehicle, charging management and consultation with which we are supporting the transport company in its endeavour to electrify its buses,” says Till Oberwörder. 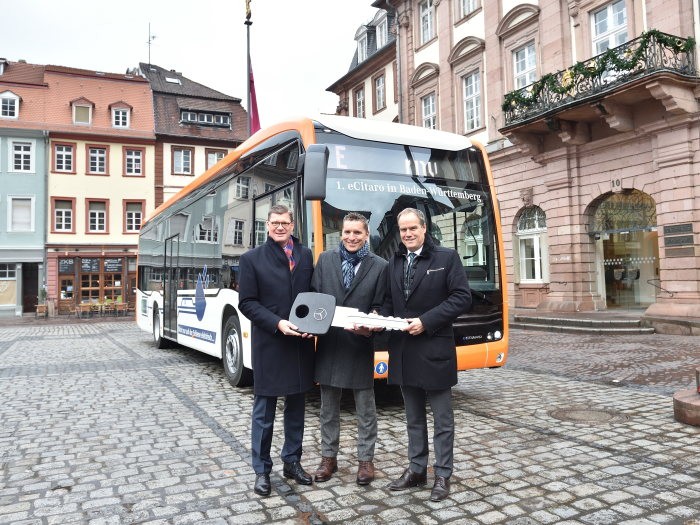 Martin in der Beek sees the electrification of bus transportation as a clear company goal: “For us electromobility is the quintessence in modern, environmentally-friendly and sustainable drive system technology. Our city trains have been serving the local public transportation system electrically for more than 100 years. Now, we must do the same for buses. The eCitaro will give our buses a completely new face and will literally provide for better air in the area serviced by rnv.”
Dr. Peter Kurz, Mayor of Mannheim, and Prof. Eckart Würzner, Mayor of Heidelberg, praise the far-sighted commitment of Rhein-Neckar-Verkehr GmbH with regard to “green urban traffic”. Dr. Peter Kurz: “The local public transportation system in Mannheim stands for a holistic concept comprising both buses and trains. The electrification of buses is now an important milestone on the way to a clean city and will make local public transport significantly more attractive”. Prof. Eckart Würzner: “We are delighted that the eCitaro buses have arrived. At the end of January the first electric bus service in the region – our historic city service – can go into operation. This is an important step towards emission-free local transport and a climate-smart city. We hope that production of these buses will now really take off.”