The electric school bus Saf-T-Liner C2 Jouley, first outcome of the new cooperation between Daimler Buses and Proterra, received full CARB and HVIP Certifications and is eligibile for funding from the California Energy Commission (CEC).

Commercial production of the vehicle is scheduled to begin next year and assembly will take place in North Carolina. 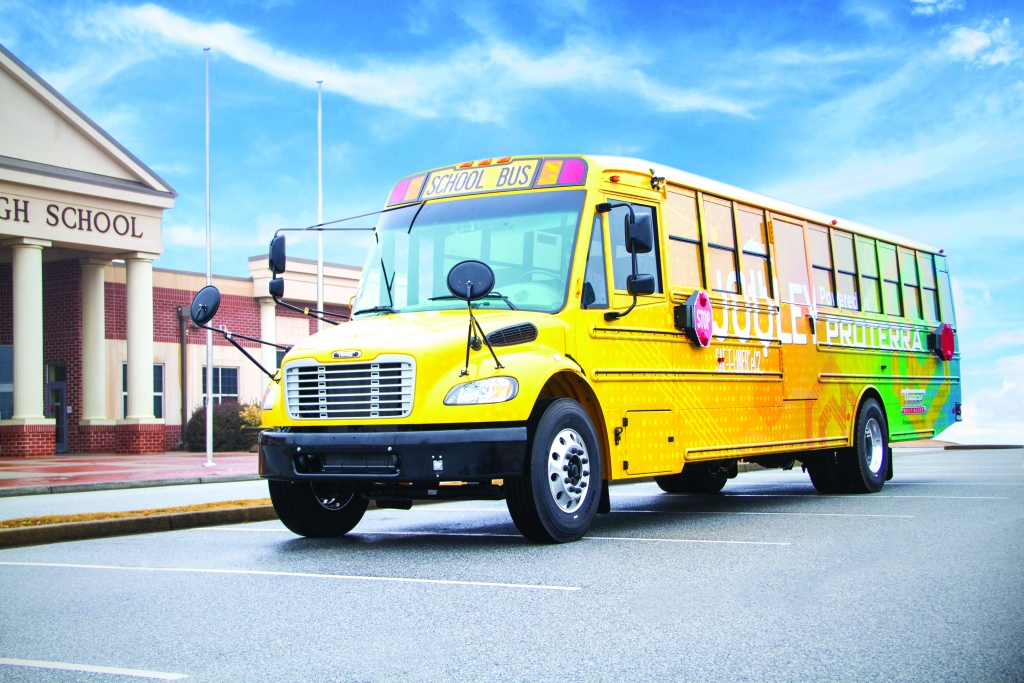 The partnership between Daimler Buses and Proterra was announced in occasion of IAA Commercial Vehicle 2018 in Hannover. Where visitors had the chance to see the electric school bus in a version powered by Efficient Drivetrains. The first electric school bus realized by Proterra and Thomas Built Buses was unveiled during the 44th Annual National Association of Pupil Transportation (NAPT) Conference.

The Saf-T-Liner C2, alias Jouley, electric school bus powered by Proterra represents Proterra’s entrance into a new commercial vehicle sector, the school bus market. The C2 bus powered by Proterra is being co-developed with Thomas Built Buses in Proterra’s Greenville, SC manufacturing facility. The electric school bus Jouley has 220 kWh of total energy capacity and can charge in about three hours with the Proterra DC charging system. Operating range can be up to 120 miles depending on various operating conditions.

A step forward on the electrification of school bus market

“With these certifications, we are one step closer to making electric school buses viable for the school bus market,” said Caley Edgerly, president and CEO of Thomas Built Buses. “While this milestone is worth celebrating, we continue to work with proven leaders in the industry like Proterra and our parent company Daimler Trucks North America to create the best product possible for the school bus market. Over the past few months, we’ve been piloting Jouley with individual drivers, engaging with school districts and local agencies to shape the future of our electric vehicle offerings. We are very excited about what Jouley has to offer today and where we are heading.”

“School buses are a great application for battery-electric vehicle technology and we’re excited to bring our industry-leading battery systems to the most popular Thomas Built Buses vehicle,” said Proterra CEO Ryan Popple. “In addition to greater efficiency and lower operating costs, electric school buses have zero tailpipe emissions, which eliminates exhaust emissions and benefits our communities and our children.”

Enel X and Italian public transport operator Autoguidovie (through the company Cavourese) will be “teaming up to electrify part of the bus fleet serving Turin, Piedmont’s largest city”. Autoguidovie was awarded Lot 2 of the subcontracting tender that was put out by the Turin-based ...
BYD and Castrosua launch a cooperation to build electric buses for the Spanish market. BYD has signed a framework agreement with the local bodybuilder so that they will collaborate to produce eco-friendly customised 12-metre eBuses in Spain, specifically for the Spanish market. The BYD-Castrosua 12-...
Transport for Greater Manchester has ordered 50 zero-emission double deck buses from Alexander Dennis for the first phase of the franchised Bee Network bus system which will launch in September 2023. Alexander Dennis has recently announced the launch in 2023 of its in-house developed e-bus range, bu...
A total of 1,767 electric buses were registered in Europe in the first half of 2022, including as many as 242 signed VDL (13.7 percent of the total), which thus establishes itself as the European market leader for registrations ebuses, according to data collected and processed by Chatrou CME Solutio...