At IAA 2018 the main topic was the electromobility, even with the main protagonists of the present European electric bus market dramatically absent: Solaris and VDL opted for the Innotrans in Berlin while Irizar stayed at home (however, the Basque manufacturer never showed up in Hanover). Daimler unveiled the Mercedes eCitaro to the public, MAN showed the concept of Lion’s City E. Iveco Bus realized an entire diesel free stand: gas, electric (Heuliez) and trolleybuses were the main guests. BYD showed some novelties. Scania bets on LNG for the coach.

Proterra and Daimler, together

Among the main news, the partnership between Proterra and Daimler, with the electrification of North American school bus market under the spotlight. The first of the efforts that Proterra and Daimler will make together, Proterra reports in a press release, will be to explore potential synergies with Daimler’s Thomas Built Buses division by bringing Proterra’s proven battery and drivetrain technologies to the North American school bus market.

However, while waiting to start working with Proterra, Daimler has developed a first model of electric school bus, already in series production, with driveline by Efficient Drivetrains. The 12-metre ebus by Thomas Built Buses, shown at the Daimler Trucks North America stand, is called Saf-T-Liner eC2 and is nicknamed Jouley. The engine delivers 235 kW and 2,950 Nm. 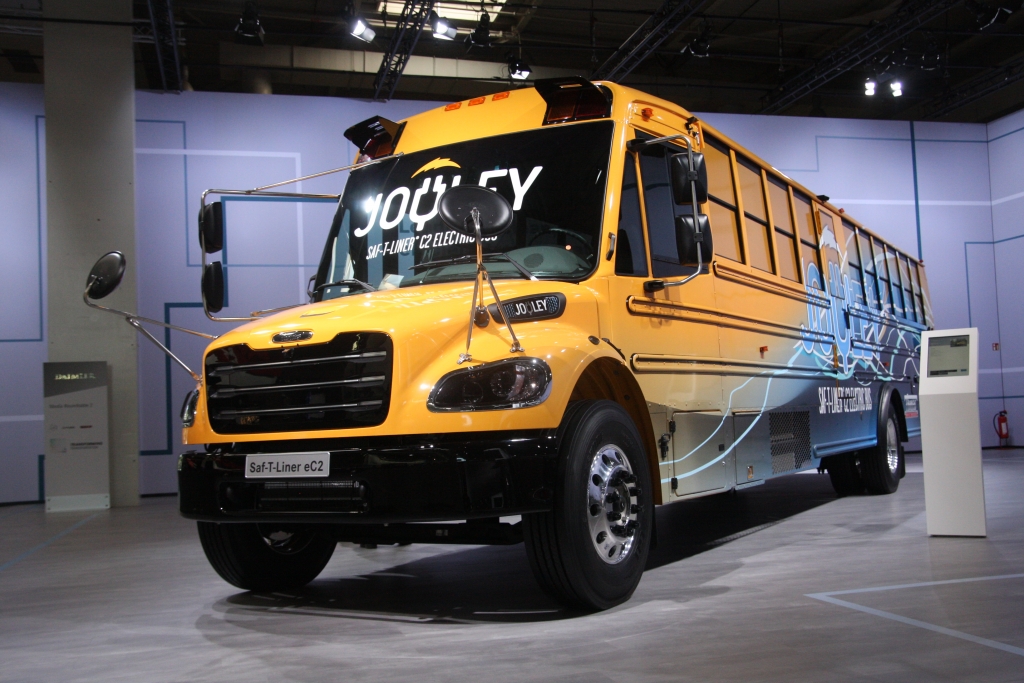 BYD with some novelties

BYD unveiled two new products. The 12 and 18 meters, the latter with pantograph, ready for serial production. Both vehicles are equipped with lithium-iron-phosphate (Lfp) batteries, also manufactured by the Chinese manufacturer. The internal comfort of the bus has also been improved. The cockpit is new, while the interior lighting is all LED. The 12 meters is the first vehicle to be built according to a new design, which has modularity as its essential feature. The weight has been reduced by 4 percent thanks to the use of new materials. 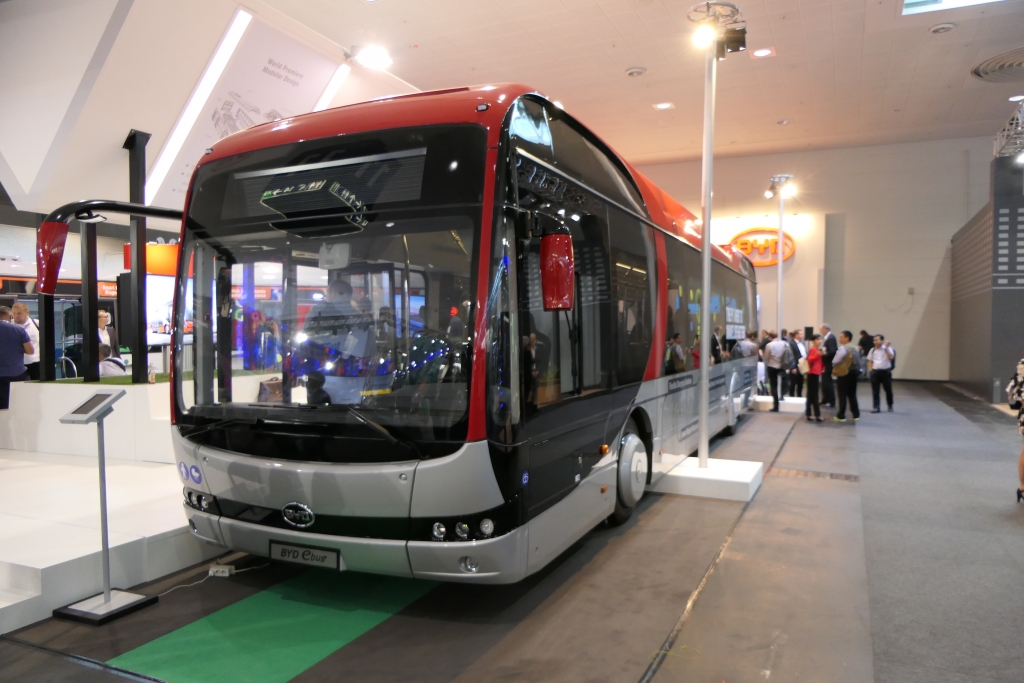 CNAC, it’s not a low floor…

Hidden at the borders of the exhibition, the Chinese manufacturer Cnac presented a low floor with the floor placed at roughly one meter from the ground (sic). Electric motor has 200 kW output. The bus is equipped with 165 kWh batteries. 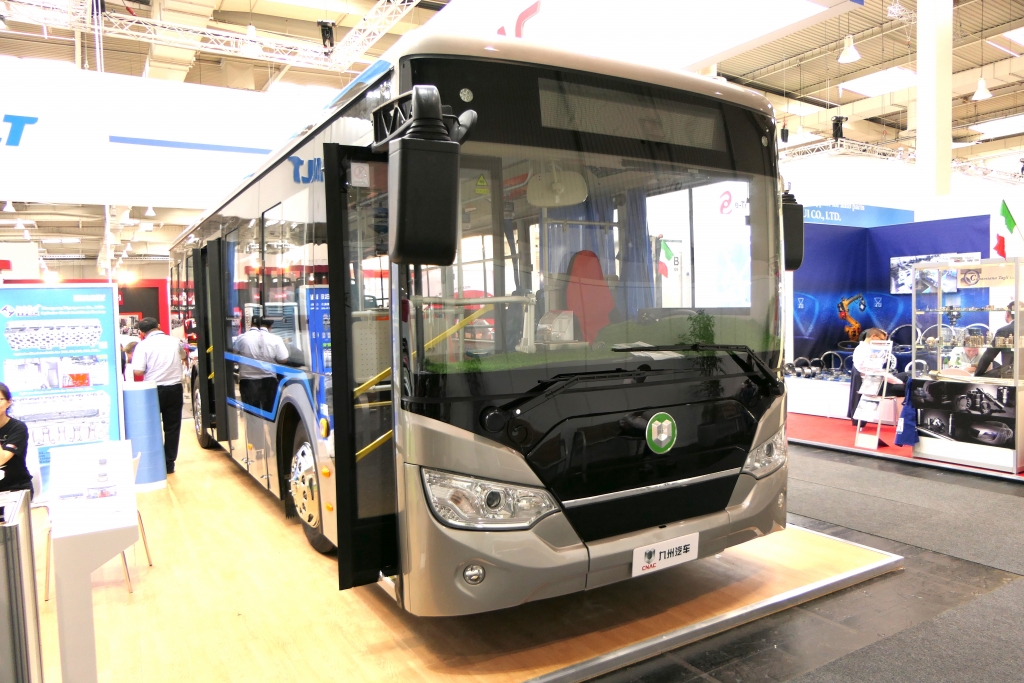 CRRC and the electric range

San Bus King C12 is a twelve-metre electric vehicle capable of accommodating 81 people (22 seated). The battery is lithium-ion and can store 313 kWh of electricity. The engine, made in house by the Chinese company, is of the tDriver Md33 model with 150 kW of maximum power. The electric range consists of vehicles of 8, 10, 12 and 18 meters.

Hino: the Japanese part of Traton

The Japanese company (belonging to Traton group) has presented the Poncho Ev, a small electric low-floor bus. The Japanese bus measures approximately 7 metres  and is equipped with a 30 kWh battery pack. There are currently three examples of Phonco Ev in circulation, two in Tokyo and one in Ishikawa, which over the last 6 years have covered about 400 thousand kilometers. 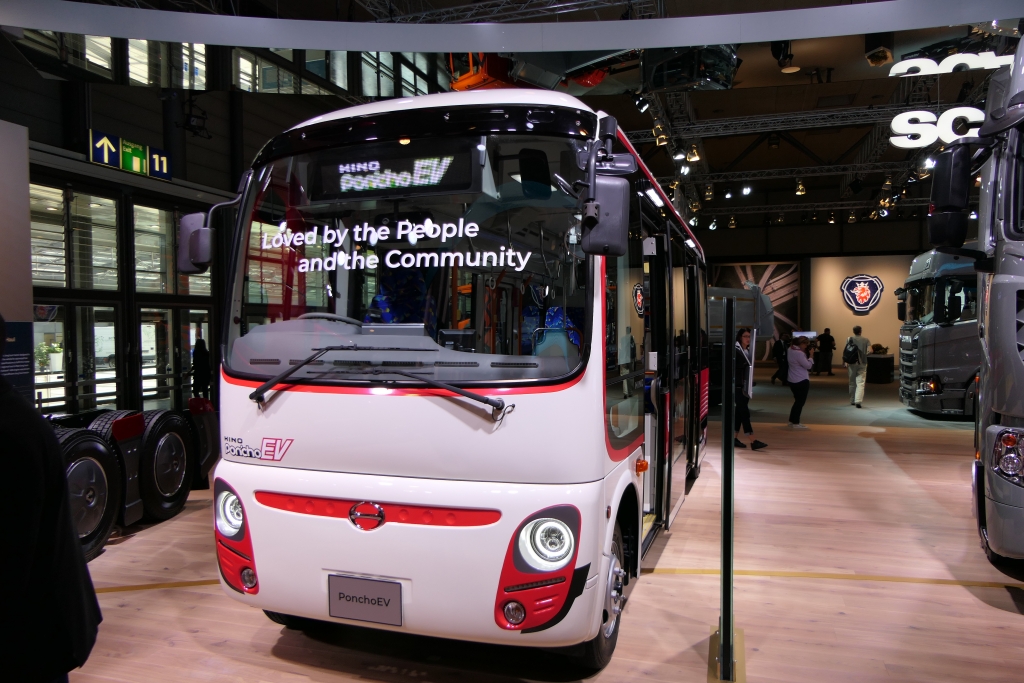 Iveco between gas and electricity

Ready for the electric, but now focused on gas. According to Iveco, methane remains the best option for urban public transport. But the electric is there, it is ready and available. In Hannover, the group led by Pierre Lahutte has shown a 12 meters electric bus (Gx 127) model by its subsidiary Heuliez. In the meanwhile, the articulated trolleybus Crealis 18m In-Motion-Charging won the Sustainable Bus Award 2019 in Urban category. 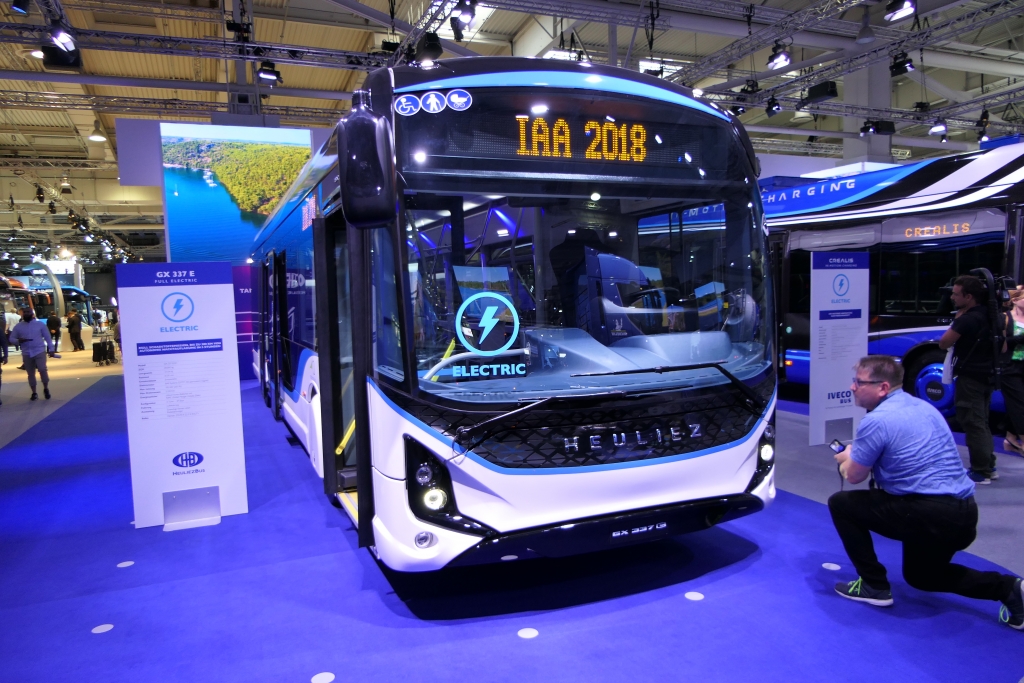 Karsan group presented Atak in electric version: an 8 meters city bus capable of carrying 58 passengers. It promises a range of 300 kilometres thanks to a 220 kWh battery pack (quite big if considering the lenght of the vehicle…).

MAN and the electric concept

Everything has already been said about the concept of MAN Lion’s City E. The vehicle will be equipped with central electric motor and depot charging. The mass production will start in the second half of 2020. The battery size is a real surprise: with 480 kWh for the solobus and 640 kWh for the articulated, MAN Lion’s City electric is an absolutely unique case in a context that sees battery usually ranging from 240 kWh to 350 kWh.

Mercedes eCitaro in the spotlight

Eyes on the eCitaro, almost ready for launch onto the market. During the next years the bus will undergo major changes, not least the batteries (Akasol is already working on next generation…). The hybrid version of the Citaro was elected as the most sustainable intercity bus, according to the jury of the Sustainable Bus Award. 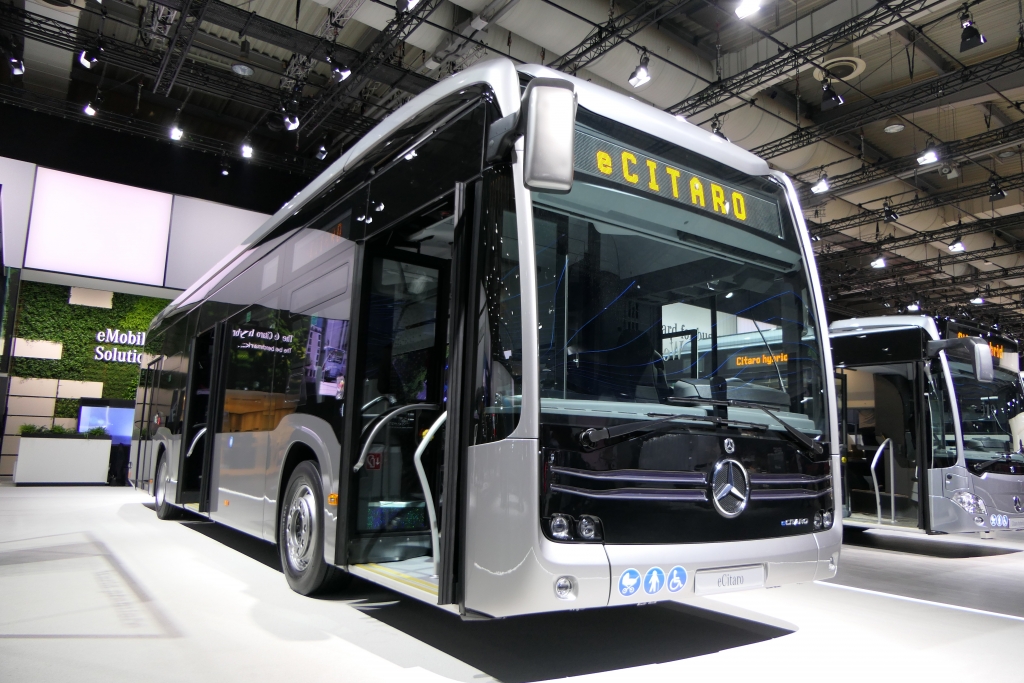 It’ll be the first LNG powered coach in the world. Scania unveiled at IAA a LNG coach (Interlink MD) expected to cover about 1,000 km. It can also be powered by liquefied biogas, that can reduce carbon emission by up to 90 percent. At the stand also the hybrid Citywide low entry. 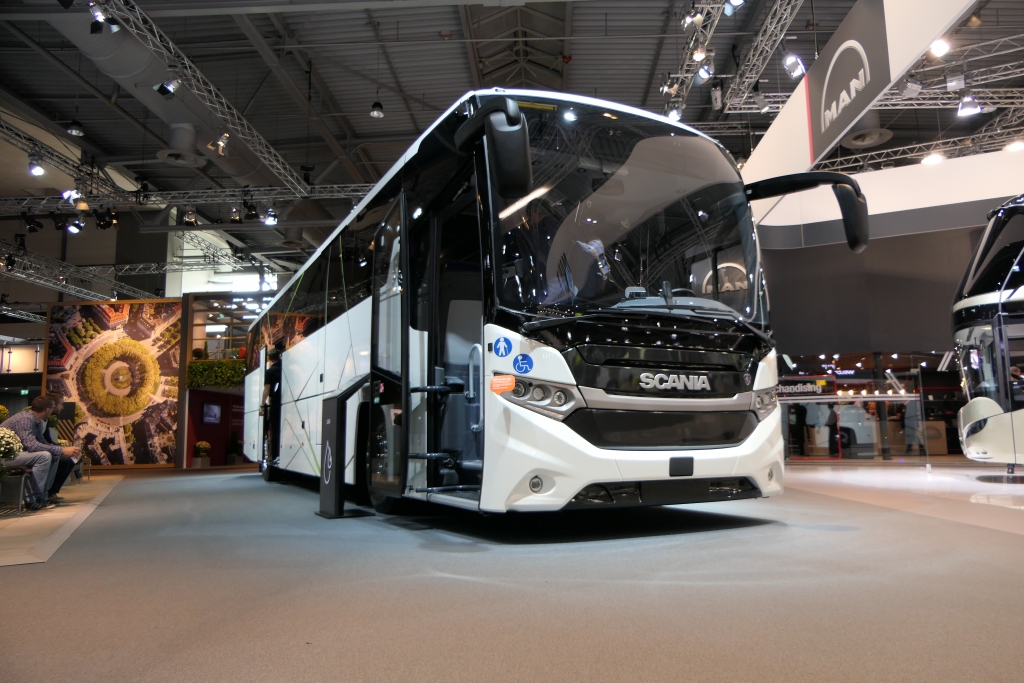 Temsa has announced the beginning of the production of a electric bus range from 9 to 12 meters, with different charging technologies. The range, called Avenue Electron, has a new design, a lower belt and smart interior. Temsa offers three different battery packs: 240, 300 or 360 kWh. Lithium batteries ensure a distance of up to 350 km.

Volvo, the coach is sustainable 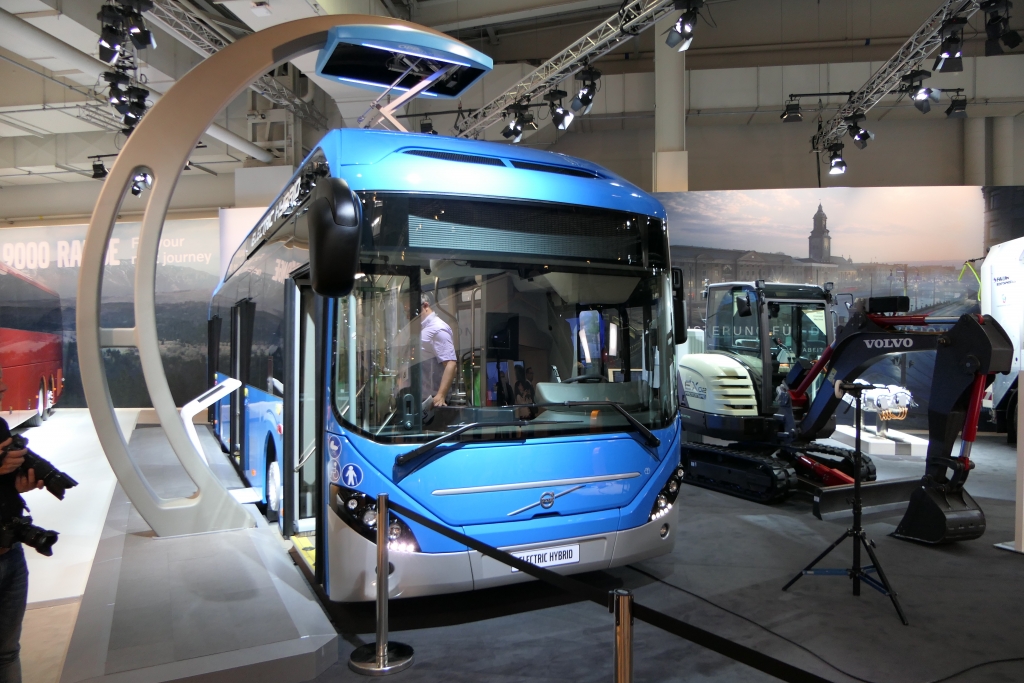 The hybrid bus showcased by Volkswagen Caminhões e Ônibus (now belonging to Traton group) is called e-Flex. 260 kilowatt electric motor (for a torque of 2,150 Nm) works together with a 110 kilowatt Otto Volkswagen Tsi 1.4 engine. The capacity of the batteries varies between 80 and 400 kWh. The vehicle sauce measures 10 metres and can carry up to 65 passengers (26 of whom are seated). 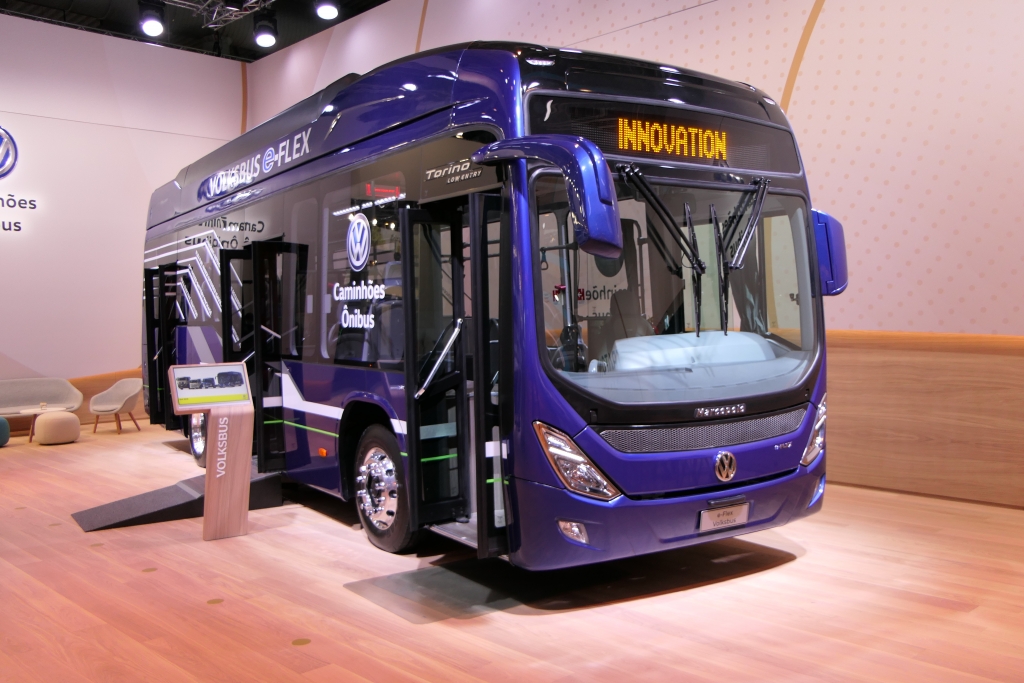