Half of Lublin bus fleet to be zero emission as of 2021. New orders for Solaris

20 battery-electric buses plus 10 trolleybuses. It’s an ‘holistic’ group of contracts the one signed by Lublin public transport authority ZTM with Solaris Bus & Coach. The value of the orders exceeds PLN 106 millions (over 24 million euros). Following this purchase, half of Lublin bus fleet is expected to be zero emission as of 2021.

The cooperation between Lublin’s public transport operators and Solaris dates back to 1996. So far, MPK and ZTM have ordered 146 buses and trolleybus of varying length produced in Bolechowo. 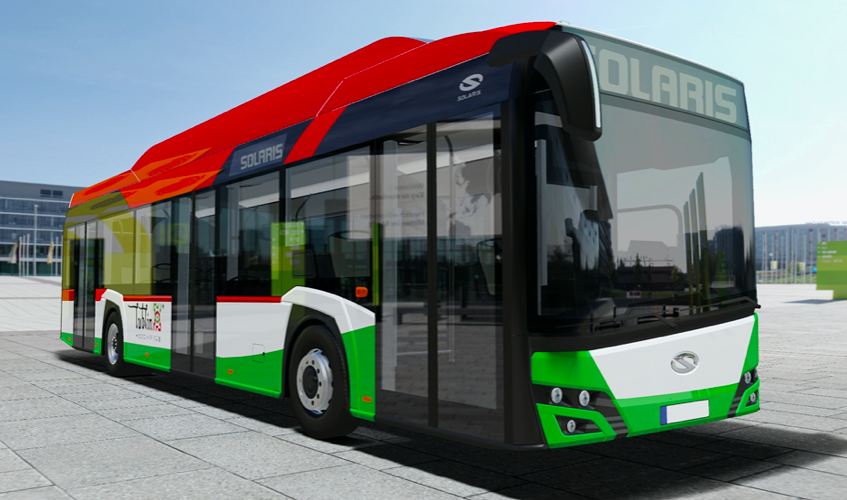 Solaris deliveries in Lublin set to end in 2021

The new vehicles commissioned by public transport authority ZTM include 15 articulated Solaris Trollino 18 trolleybuses and 20 electric buses of the Solaris Urbino 12 electric type. The delivery dates are staggered over the period from November 2020 (5 trolleybuses) to April 2021 (10 trolleybuses) and September 2021 (20 electric buses), Solaris points out.

The Solaris Urbino 12 electric buses for Lublin, a 350,000 inhabitants city in Eastern Poland, will be fitted with 116 kWh Solaris High Power batteries tailored to frequent and fast recharging. The energy stored in these will feed a traction motor of 160 kW. Taking a few minutes, the battery recharging process will be performed via roof-mounted pantograph, whereas plug-in connectors will be used for overnight charging at the bus depot.

Photovoltaic panels are mounted on the roof, thus enabling optimised energy use by the various bus systems.

Apart from supplying the vehicles, Solaris will also set up the infrastructure needed for recharging. Four pantograph chargers with a power of 450 kW each, designed for fast daytime recharging will be placed at the bus terminal Choiny and in the bus depot at Grygowej street. Another ten stationary chargers enabling the concurrent charging of two buses with a power of 40 kW, and two mobile 40 kW chargers will be located at the same depot, at Grygowej street.

The commissioned 15 articulated Solaris Trollino 18 will also be fitted with Solaris High Power batteries with a capacity of 58 kWh. These enable the operation of the vehicle without connection to the overhead wires, for instance in case of a power failure or when the route has to be modified. It will also be possible to set out new routes without having to build new power lines.

Using automatic current collectors which the trolleybuses will feature, electric power will propel the vehicles while also recharging the batteries by means of a so-called In-Motion-Charging system. Each vehicle will have a 240 kW traction motor installed.

All of the supplied electric buses and trolleybuses for Lublin will be equipped with an air-conditioning system cooling the driver’s work space and the passenger compartment. The whole bus lighting will be made of eco-friendly and economical LED lamps. USB charging ports facilitating the recharging of devices such as a mobile phone will be available to passengers. CCTV cameras recording the vehicle interior, as well as what is in front and behind it, will vouch for the safety of travellers.

“The contracts signed today mark another step towards establishing Lublin as a centre of electromobility. For years, modern city transport – green and all-around user-friendly – has been an objective of ours. Thanks to investments in electric buses and trolleybuses Lublin already meets the target of a 25% share of electric vehicles in the operator’s total fleet, while putting the city at the forefront of electromobility systems in Poland and even in Europe. In 2021, that proportion will change radically, soaring to a 50% share of electric vehicles in the public transport fleet,” notes Krzysztof Żuk, mayor of Lublin.

“I am immensely happy that Lublin is steadily expanding its fleet of zero-emission vehicles in public transport. Resident- and environment-friendly, quiet electric drives represent the best solution for public transport. Lublin is one of the first cities we have supplied so far, starting with bus deliveries all the way back in 1996. I am grateful for over 20 years of cooperation and trust,” says Petros Spinaris, Deputy CEO of Solaris.