Trolleybus market. A growing demand thanks to zero emission operations

Trolleybus projects and investments are on a rise in several European countries. Switzerland, France, Austria, Italy, Poland, Czech Republic are among the countries where trolleybus networks are more diffuse. Significant renewal plans are underway. Also Berlin is considering new investments on this technology. On the other side of the Atlantic Ocean, Mexico City is giving ‘fresh air’ to its trolleybus fleet as well. Electric bus growing deployment is not the only protagonist of the energy transition in city public transport.

Once fitted with a diesel motor-generator and unable to break the constraints of connection to overhead powerlines, today, thanks to battery systems (In Motion Technology), trolleybuses are reinventing themselves as vehicles that can combine zero emissions with flexibility. Hess, Iveco Bus, Skoda Electric, Solaris Bus & Coach and Van Hool are the main industry players.

In this article, we at Sustainable Bus (with extensive contributions from Stefano Alfano) tried to sum-up news, case studies and developments from the dynamic trolleybus sector. 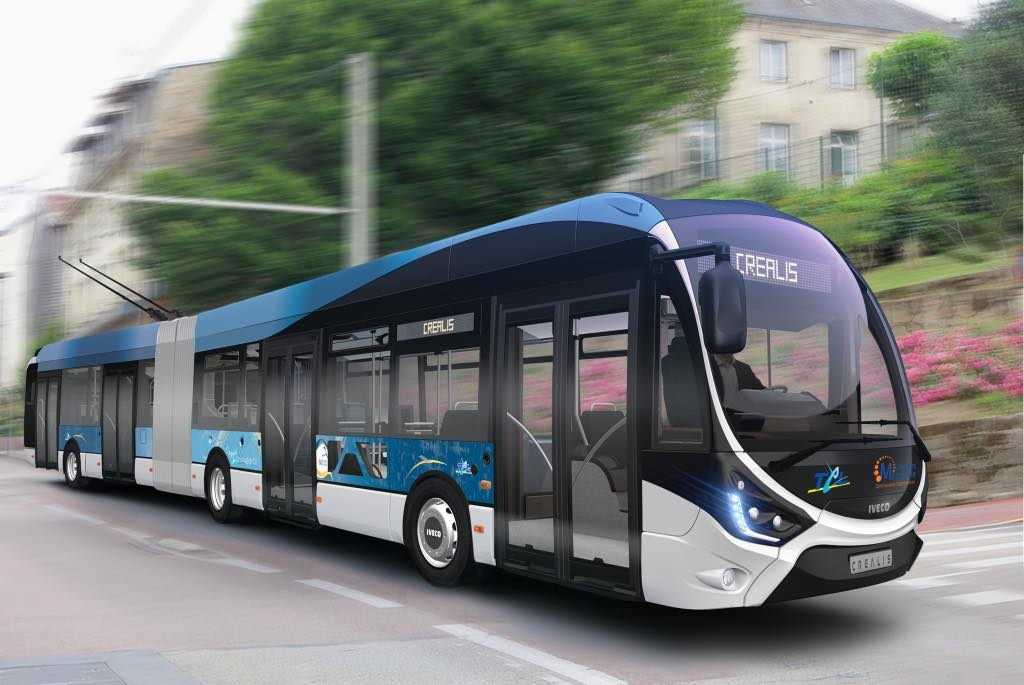 In February 2020 BVG Berlin announced that it is considering a trolleybus-based solution in Berlin‘s Spandau district. A network that might in the future be served by bi-articulated vehicles equipped with In Motion Charging technology. BVG plans the electrification of the bus fleet by 2030. By 2021, some 225 e-buses are expected to hit Berlin’s streets.

In this framework, a partial installation of trolleybus overhead lines is being taken into consideration for Spandau district.

According to the feasibility study carried out by BVG and presented at German fair ElekBu 2020, the goal would be to provide between 50 and 65% of journeys by wire in the district. It is also argued that this solution does not affect travel or operating times and that it allows the bus fleet to be optimised (no vehicles immobilised by recharging). 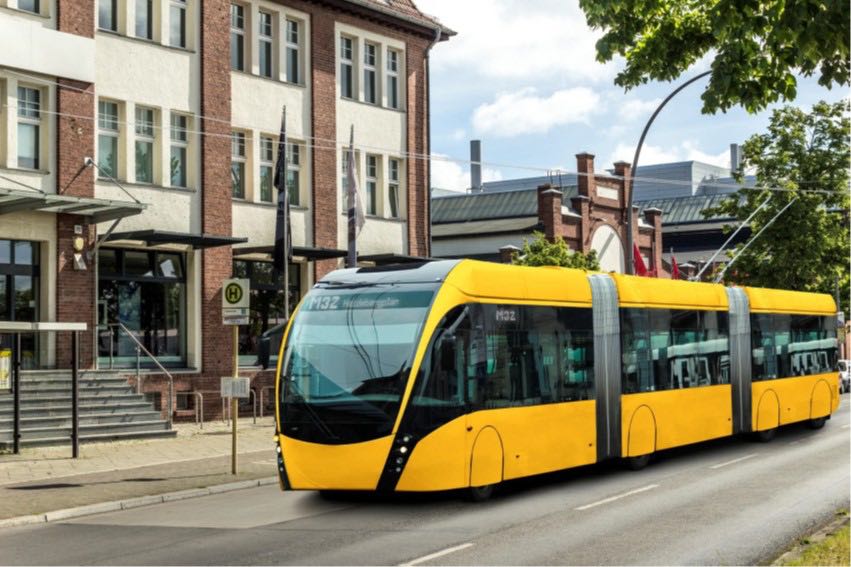 Interesting advancements from the technological point of view are being tested in Riga (Latvia’s capital), where a batch of trolleybuses has been equipped with a fuel cell range extender for the very first time. The innovative concept that is carrying passenger on route 4. The public transport operator Rīgas satiksme informed on 24th March 2020 that all the ten hydrogen-driven trolleybuses began operations.

Italy, trolleybuses are not old-fashon vehicles

In Italy, trolleybuses are still bound to have a major role in Milan, where the municipal operator ATM has set a plan to reach 2030 with a fully zero emission public transport fleet. In this framework it is included the large order for as many as 30 Solaris Trollino 18 (the agreement is for 80 vehicles). The first vehicle reached Milan in summer 2019. Some technical issues delayed the beginning of operations of the vehicles, that should roll out in spring 2020.

Modena and Parma to get a total of 18 Trollino

And 18 Polish-made trolleybuses are also headed to Modena and Parma. 2020 is set to be a crucial year: the operators SETA Modena and TEP Parma, both providing carrier services in the Emilia-Romagna region in the North of the country, have placed orders for altogether 18 modern Solaris Trollino 12 vehicles.

The vehicles will feature among others a central traction motor and traction batteries with a capacity of 45 kWh and a cooling system, all of which will allow the vehicles to cover a much longer distance without the need to be attached to overhead wires. There is room for nearly 80 passengers. 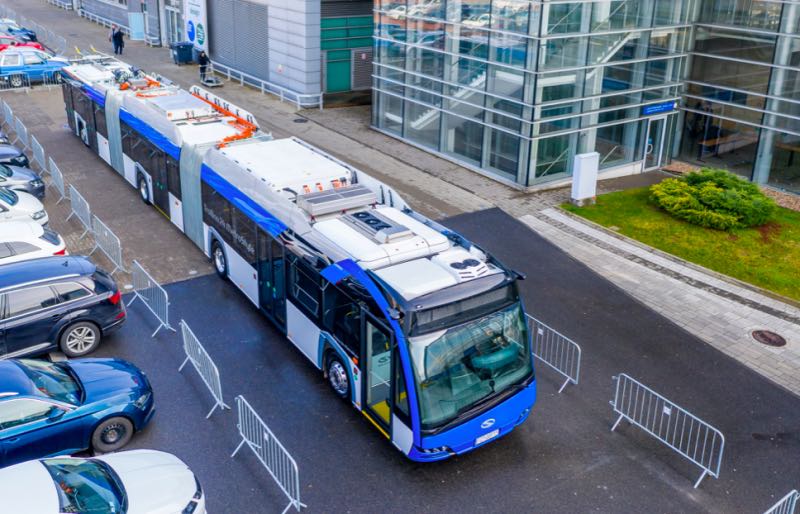 Anyhow, Solaris Trollino’s portfolio is not concluded with the 12 and 18-meter version. A 24-meter bi-articulated trolleybus is also part of the family. In February 2020 the Trollino 24 has received the Top Design Award handed out during the Arena Design 2020 event in Poznań.

Genoa also has trolleybus-based plans. The city has presented to the Ministry of Infrastructure and Transport a dossier on the implementation of the rapid mass transport system. As reported on Autobusweb, Genoa asked 650 millions euros to finance as much as 4 new public transport lines, served by trolleybuses. In spring 2019 in Genoa took place the inauguration of a three days pilot held by public transport operator AMT. In the spotlight, a trolleybus Van Hool Exquicity 24 meters long. The capacity is 180 passengers. And in January 2020 it was the turn of an Iveco Crealis to be tested on the city roads.

While the first version of the project was rejected by the government, a second version for trolleybuses in Genoa worth 478 million euros was presented in May 2020. The purchase of 145 new trolleybuses is part of the plan. 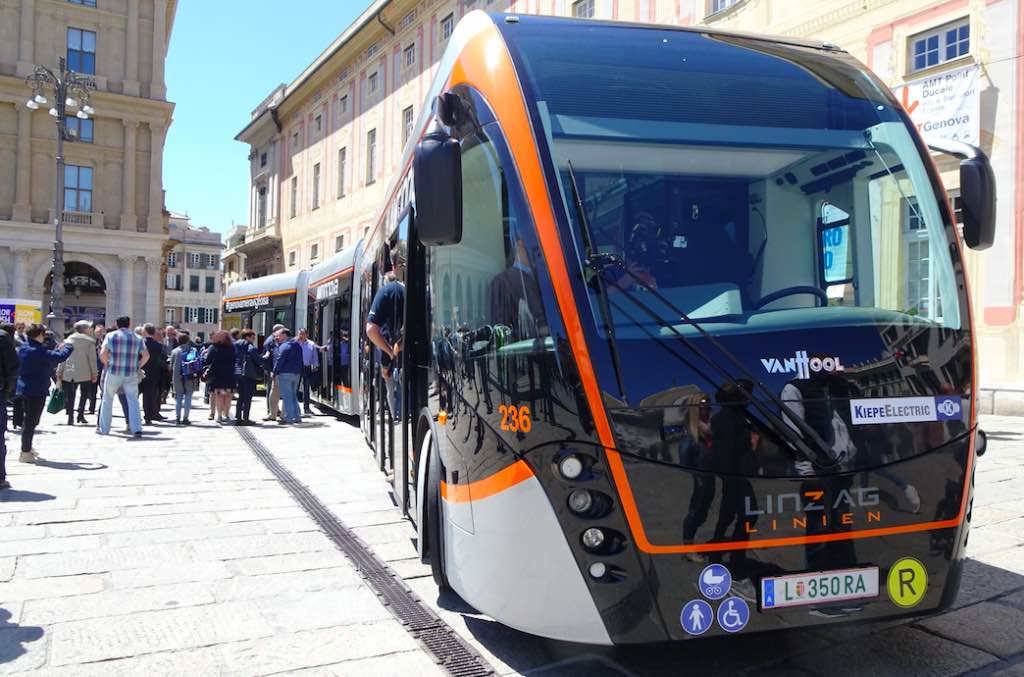 In France Iveco is the major trolleybus player

The Polish producer Solaris is also gaining ground in France. The order for 22 Trollino 12-meter for Saint-Etienne, signed in January 2019, marked the debut of the brand in the French trolleybus market. The vehicles will be fitted with a Skoda drive system and 40 kWh battery. The value of the contract is over 17 million euros.

Remaining in France, several cities are placing new orders for brand new trolleybus with In Motion Technology. In September 2018 Limoges Métropole decided to invest in the new generation of Iveco Crealis. Precisely, the municipality choose the Crealis In-Motion-Charging, the new generation trolleybus announced in spring 2018 and, later that year, unveiled at IAA Commercial Vehicles in Hanover 2018. At the German exhibition it was awarded as Sustainable Bus Award 2019 in Urban category. The vehicle, equipped with an original Skoda Electric powertrain, was tested widely in 2019 in Nancy (France). Three units have been introduced on the busiest routes of Limoges network in autumn 2019, where they joined a fleet of some 30 trolleybuses. 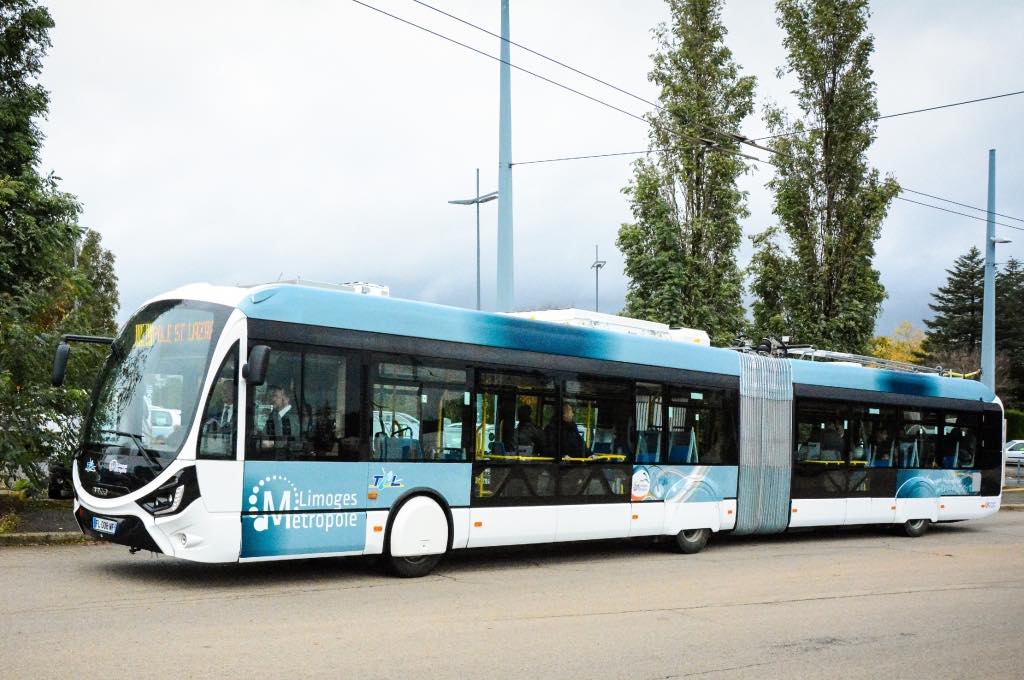 And Lyon is no exception. The SYTRAL (Lyon Metropolitan transport authoriry) released on friday 14th september 2018 his strategy to be compliant with the French environmental law which comes into force in 2020. The electro-mobility, with two different technologies get the widest share. Following Sant-Etienne, also the SYTRAL in Lyon announced the choice in favour of trolleybuses. The new generation of trolleybuses with In Motion Charging will represent an important part of the tenders to come on 2020 and beyond. In fact, six new lines will be fitted with such machines.

Bi-articulated trolleybus models on a rise

Hess is a major player in its domestic market, in Switzerland. 12 double-articulated vehicles will be deployed on Lausanne public transport network. The Swiss manufacturer, in fact, in early 2019 won the international call for tenders and the framework contract for the renewal of the trolleybus fleet in the Swiss city. Lausanne prides itself to have one of the largest trolleybus fleets in Europe. Hess new generation trolleybuses are also in operation in Bern and Geneve. 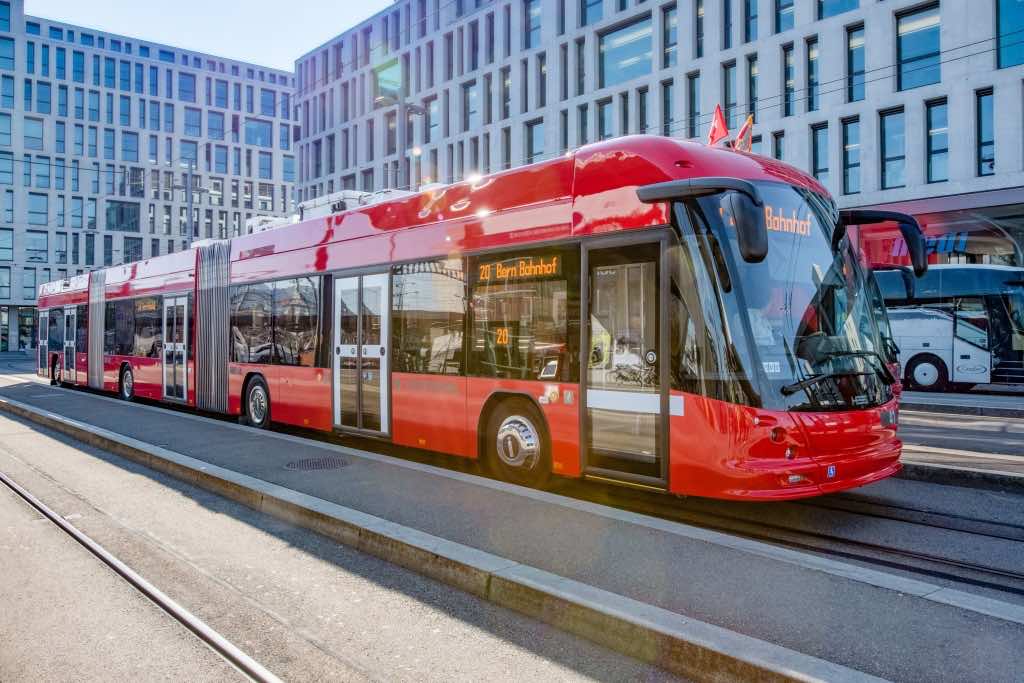 Still in Switzerland, Zurich’s public transport network looks forward to the future with new technologies and new trolleybus lines. Following the delivery of three 24-metre maxi trolleybuses in 2019, the operator VBZ Zurich is continuing to renew its rolling stock. Hess is once again the chosen industry player. In March 2020, deliveries began of 9 new trolleybuses, series 200-208, of the Lightram 19 type, 18.7 m long, equipped with four doors with IMC technology and battery pack.

Austria, trolleybuses are the backbone of Salzburg mobility

The Swiss company is well established in Austria as well, where in late 2018 it won a trolleybus tender issued by Salzburg, which has one of the largest trolleybus fleets in Western Europe in operation (around 110 vehicles running). The framework contract includes the supply of up to 50 vehicles, 15 of which are 18-metre trolleybuses and are to be delivered next year. The agreement also includes 24-meter trolleybuses. 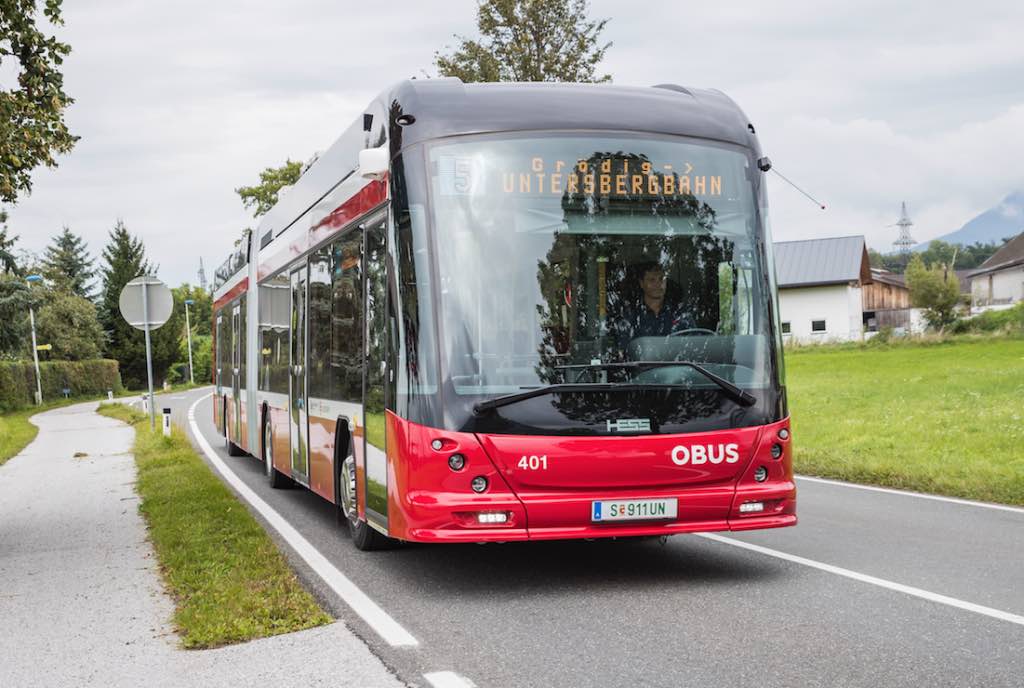 Eastern Europe has developed a strong link with trolleybus technology throughout history. And still bets on this category of vehicles, that represent the backbone of public transport systems in several cities.

First stop, Poland. Half of Lublin public transport fleet to be zero emission as of 2021, according to plans. In December 2019 the public transport authority ZTM secured two orders with Solaris. One for 20 battery-electric buses and one for 10 trolleybuses.

The cooperation between Lublin’s public transport operators and Solaris dates back to 1996. So far, MPK and ZTM have ordered 146 buses and trolleybuses of varying length produced in Bolechowo.

Gdynia, on the Baltic coast, is known as one of the capital cities for trolleybus technology in Europe. The city hall in 2018 signed a contract with Solaris for the delivery of 30 trolleybuses worth over 22 million euros in total. Thanks to Solaris’ winning bid, the fleet of PKT will welcome in its ranks a batch of articulated Trollino 18, although the order also consists of Trollino 12 which are well-established in Gdynia. The city was the buyer of the first trolleybus produced by Solaris in 2000. 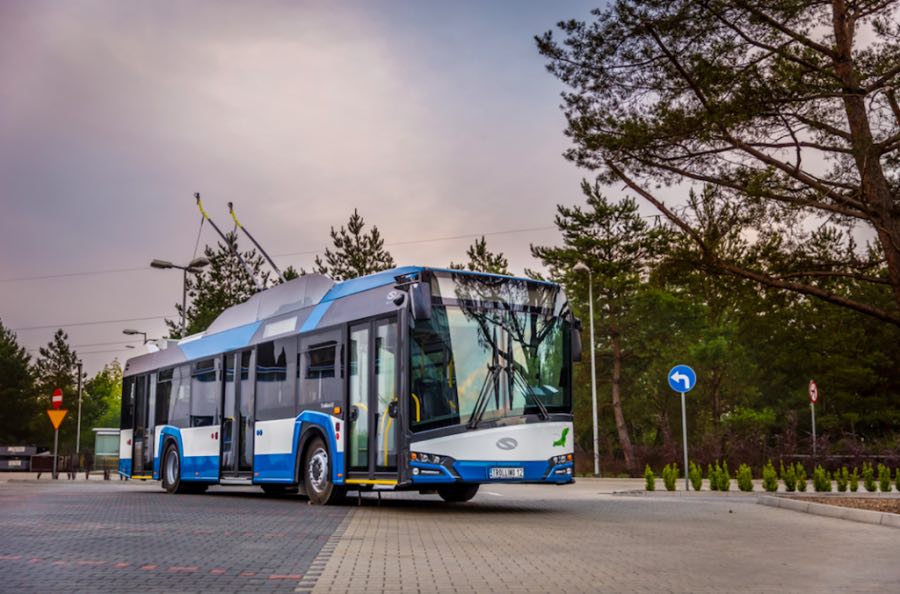 What is quite interesting in Gdynia case is that the commissioned vehicles will be fitted with additional batteries which enable driving off the traction line. In the case of the 14 Solaris Trollino 12 trolleybuses, the batteries will have a capacity of 58 kWh, whereas the 16 articulated vehicles will be equipped with 87 kWh batteries. This means that both types will be able to cover a distance of dozens of kilometres in zero-emission mode without the use of a pantograph. In addition to trolleybuses, under the contract, the company will also provide batteries that will allow the modernization of 21 other vehicles.

Czech Republic is no exception. In 2019 trolleybus vehicles returned to Prague. 47 years later. From the beginning of July, passengers can take advantage of the new trolleybus service, initially carried out with one vehicle, on line 58 that connects Palmovka (Metro B) and Letňany (Metro C), with a length of 5 km.

As of spring 2020, we could mention important projects of fleet renewal in four cities. In fact, new full electric trolleybuses have been delivered to the Teplice network, and others are being ordered. Being more specific, Opava has ordered new vehicles, Ostrava has published a call for tenders and Marianske Lazne‘s order is close to delivery. We are talking about a total of 30 trolleybuses involved in these projects. The Czech manufacturer Skoda Electric is the main player.

A huge batch of trolleybuses has been ordered in Lithuania in late 2018. No less than 85 Trollino 12 have been ordered by the public transport operator of Kaunas city, UAB Kauno Autobusai, in Lithuania.

The delivery of the zero-emission vehicles from Bolechowo shall be carried out over a period of 15 months from the signing of the contract, reported Solaris in a press release.

But Europe is not the only region where battery trolleybus vehicles are gaining ground. Mexico City, one of the core cities of ZEBRA project led by C40 and ICCT, took delivery of 63 trolleybuses coming from the Chinese manufacturer Yutong and issued in March 2020 a new procurement for as many as 50 articulated ones. 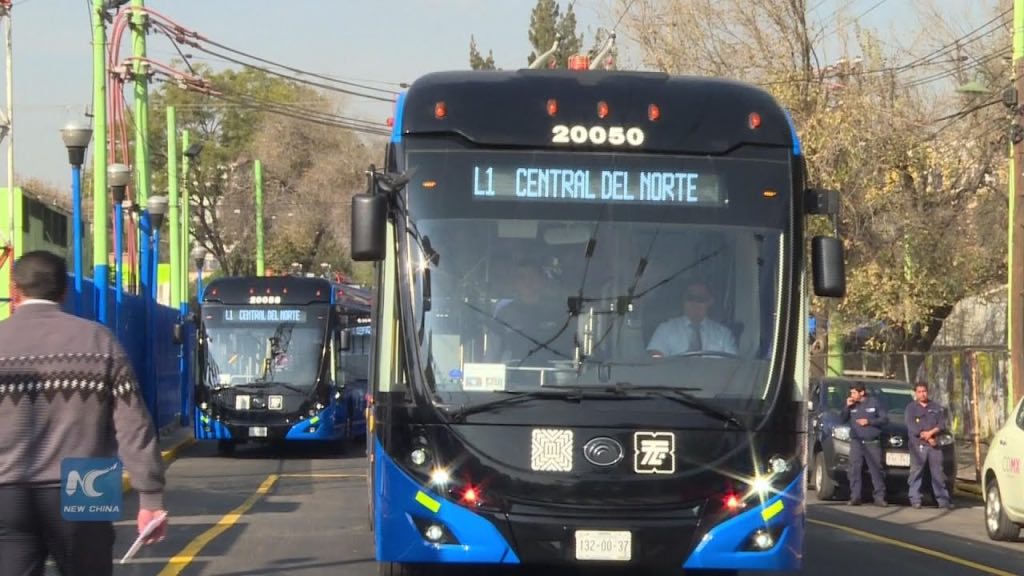