Solaris Bus & Coach realized the world’s first mobile blood donation centre in an electric bus, the Solaris Urbino 8.9 LE electric. It is the first of two vehicles of this type commissioned by the Regional Blood Donation Centre (RCKiK) in Katowice. On the day of its première the vehicle won an award at the International Invention and Innovation Show INTARG. 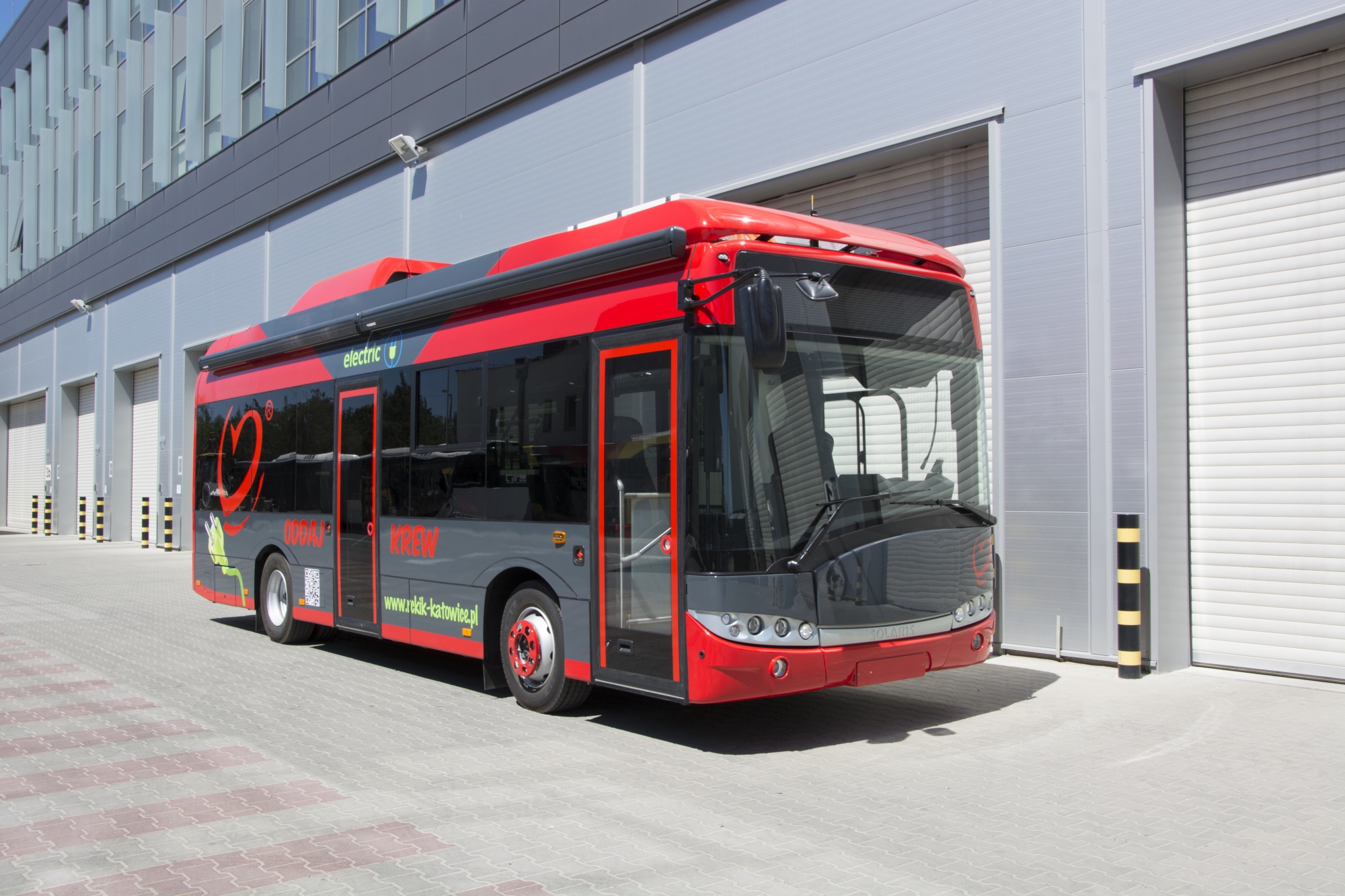 The first fully emission-free bloodmobile, or mobile blood donation centre, was presented officially during the celebration of the 70th anniversary of the Regional Blood Donation and Hemotherapy Centre in Katowice. The vehicle was built on the basis of a Solaris Urbino 8,9 LE electric – i.e. the model that started a series of eco-friendly, electric vehicles made by the Bolechowo-based bus maker, that now is the leader of European market of electric buses. The company has recently been acquired by Spanish group CAF.

The Solaris Urbino 8.9 LE electric resembles a standard bus from the outside, but it has been adjusted to the needs of blood donation and storage. In line with the requests of RCKiK in Katowice, the manufacturer has equipped the bus with two specialist mobile blood donor lounges, a doctor’s office, a reception area as well as a small catering area. What is more, the vehicles are also fitted with, among others, shutters and external awnings as well as an LED-technology lighting. Thanks its air-conditioned passenger compartment, Wi-Fi access and USB ports installed near the lounges, anyone willing will be able to donate blood in a comfortable setting. 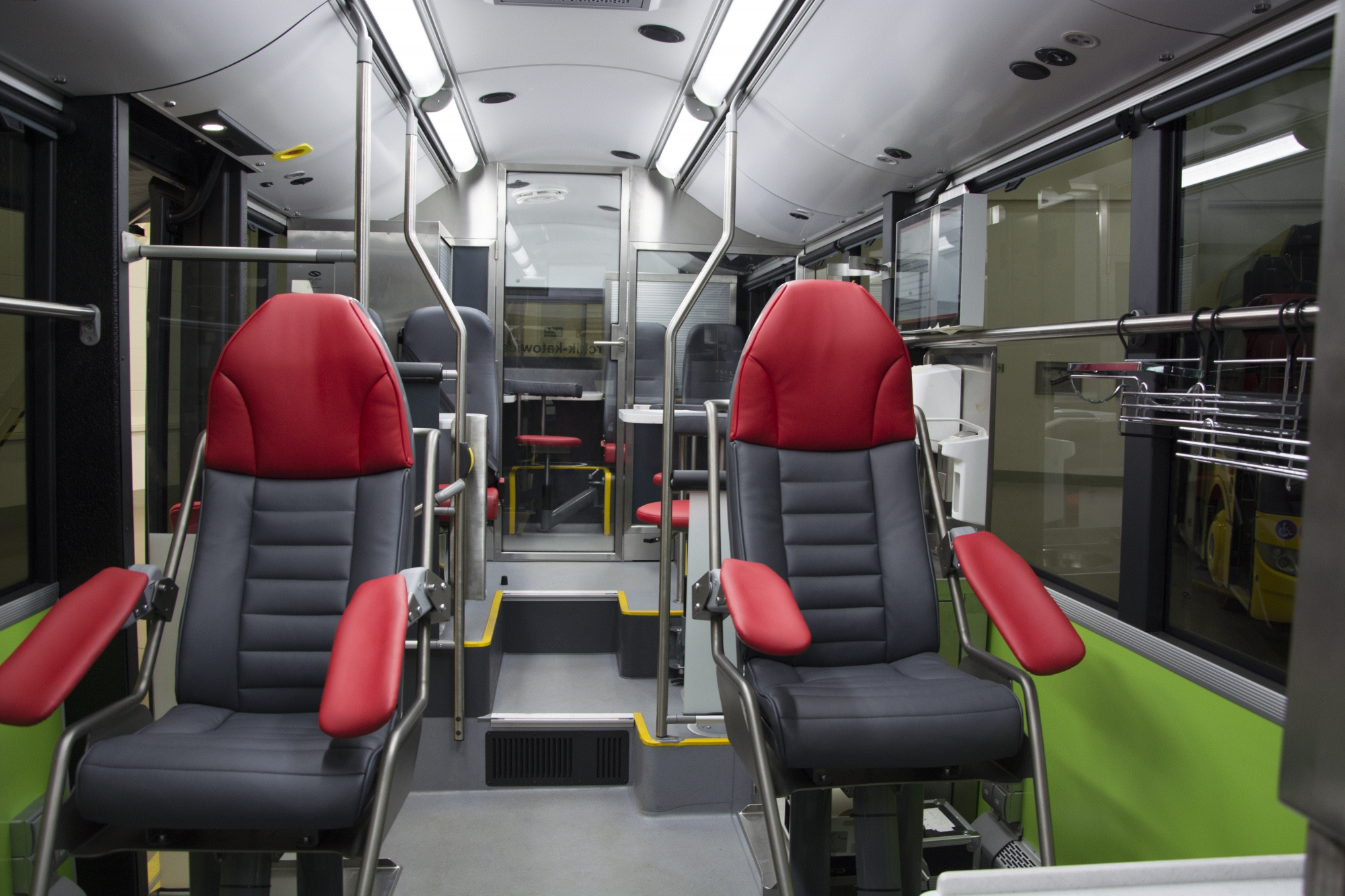 The electric bloodmobile was designed and built in a way that allows to hold blood donation campaigns without interruption in city centres, shopping malls, sports halls, i.e. in venues where conventional vehicles – i.e. with a normal combustion engine – for blood donation cannot be used. Boasting an electric drive of 160 kW and batteries with a capacity of 160 kWh, the bus ensures a fully emission-free operation mode even with regard to heating or air-conditioning, as well as when all devices on-board are operating.

The less-than-nine-metre long Solaris Urbino electric made in Bolechowo meets all standards and regulations applicable for blood donation centres, but it also enables the remote transmission of data to the Blood Bank computer system. It is among others those very features that convinced the jury to award the vehicle makers with the prize of the International Invention and Innovation Show INTARG 2018. The makers have also filed the design of the electric ambulance for blood donation with the Patent Office and the application is being scrutinised now. Co-operation between Solaris and the Regional Blood Donation and Hemotherapy Centre in Katowice started a long time ago, having lasted for over 20 years. The first special purpose vehicle made in Bolechowo – a mobile station for blood collection based on a coach, rolled out of the factory in 1996.