The city of Szczecin becomes the next city in Poland to embrace the add of battery-electric bus in the fleet. Representatives of the municipality and of Solaris Bus & Coach have signed a contract for the purchase of 8 emission-free buses of the Urbino 18 electric type. The modern electric buses will be delivered to Szczecin, in the north-west of the country, close to the border with Germany, by the end of September 2021. The contract is worth nearly EUR 8 million.

Recently Solaris summed up that it has over 150 e-buses cruising the streets of 20 Polish cities. Another batch of over 300 vehicles are currently in production or shortly before delivering. In the coming months the Solaris electric buses fleet in Poland will grow to 490 vehicles in 33 cities. 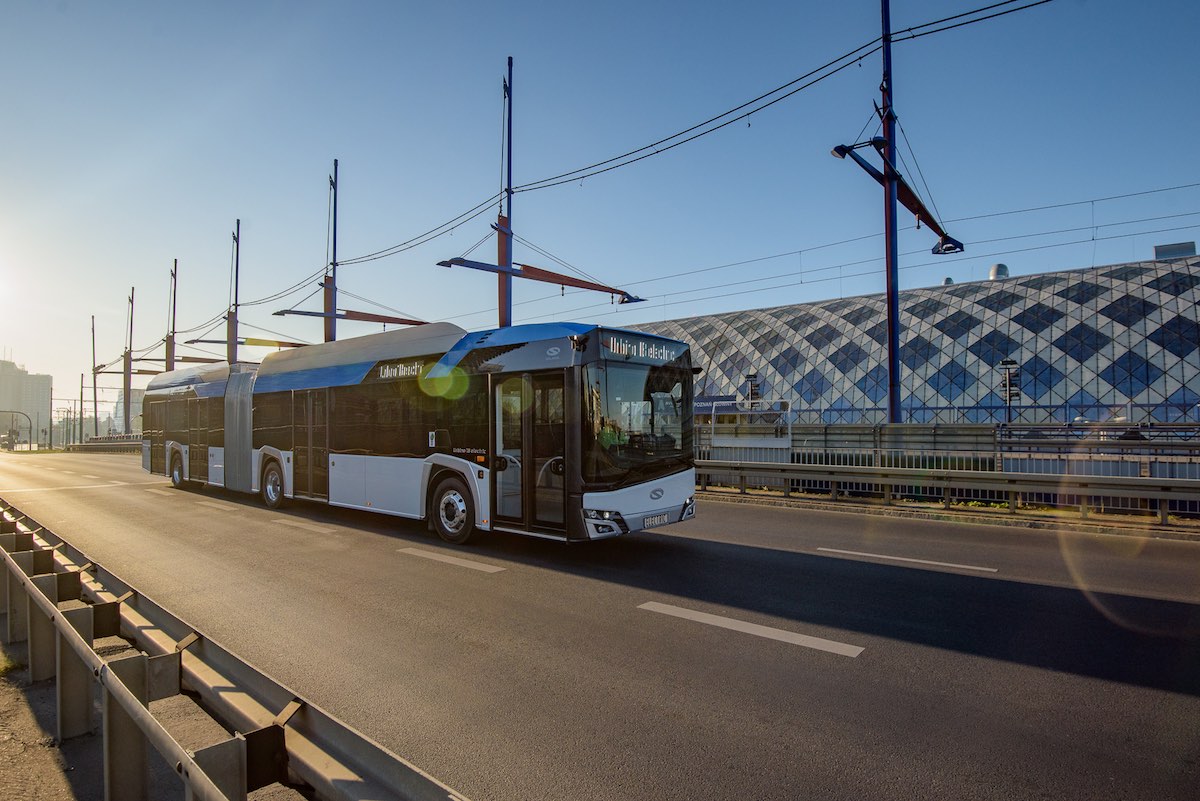 8 Solaris Urbino 18 electric buses will be supplied to the Szczecin-based public transport operator Szczecińskie Przedsiębiorstwo Autobusowe Klonowica. The articulated electric buses will be equipped with 182 kWh Solaris High Power batteries. These are energy storage units designed for fast-charging. The buses can be charged in two ways: by plug-in or by a roof-mounted pantograph of up to 560 kW.

The electric buses to be assembled for Szczecin will stand out thanks to a wide array of amenities enhancing not only the comfort, but first and foremost the safety of drivers and passengers travelling with them. The buses will feature ignition interlock devices measuring the driver’s breath alcohol content before starting the vehicle.

One particular novel solution incorporated into the bus will be on-deck monitoring integrated with the urban surveillance network, Solaris points out. What is more, the electric buses for Szczecin will also stand out on account of the use of a roof-mounted photovoltaic panel. This panel will constitute an additional source of power feeding into the passenger information system. Travel comfort will be ensured by air-conditioning of the whole vehicle, electric heating and access to on-board Wi-Fi.

Additionally, the Solaris Urbino 18 electric designated for Szczecin will be equipped with eSConnect software. A bus fleet management system of Solaris’ own design, crafted by an inter-disciplinary team of experts of Solaris, the eSConnect optimises the operation and servicing of buses, whereas the many functionalities of that system include among others monitoring the bus fleet in real time, and the technical parameters of the vehicles as such.

Poland and the transport of the future

“I congratulate the City of Szczecin on this mature, far-reaching decision. Szczecin will thus become member of the eminent group of nearly 40 Polish cities that are already using the transport of the future. Zero-emission public transport is gaining momentum, and once again, a city has decided to walk this path with our firm. We feel greatly honoured,” said Petros Spinaris, Deputy CEO of Solaris.

Solaris points out it has been collaborating with Szczecin since 2004. In these 16 years, the manufacturer has delivered 150 buses in total, of varying lengths: 10, 12 and 18 meters, both with diesel and hybrid engines. The latest commission is the first comprising of electric buses.