Solaris delivered its first electric bus in Poland in 2015. Today over 150 of these zero-emission vehicles cruise the streets of 20 Polish cities. Another batch of over 300 vehicles are currently in production or shortly before delivering. In the coming months the Solaris electric buses fleet in Poland will grow to 490 vehicles in 33 cities. And new contracts are being signed.

The sales of electric buses in Europe is growing dynamically, and Poland is the 5th Member State of the European Union for the number of electric buses in cities. The share of Solaris e-buses in the Polish electric fleet is dominant: they account for 76% of the whole e-bus fleet. Only in 2019 as much as 98% of electric bus orders in Poland were placed with Solaris.

The first electric buses in the country appeared in the streets of Jaworzno. Today the fleet of the public transport carrier PKM in Jaworzno comprises 23 electric buses manufactured by Solaris. Further 20 are in production. The city plans to switch 80 per cent of its fleet to electricity.

Gdynia has been developing its emission-free trolleybus transport network on a big scale for years, and recently welcomed super-trolleybuses to its fleet, i.e. Solaris Trollino, featuring traction batteries of the type mounted on electric buses, recharged from the overhead line. 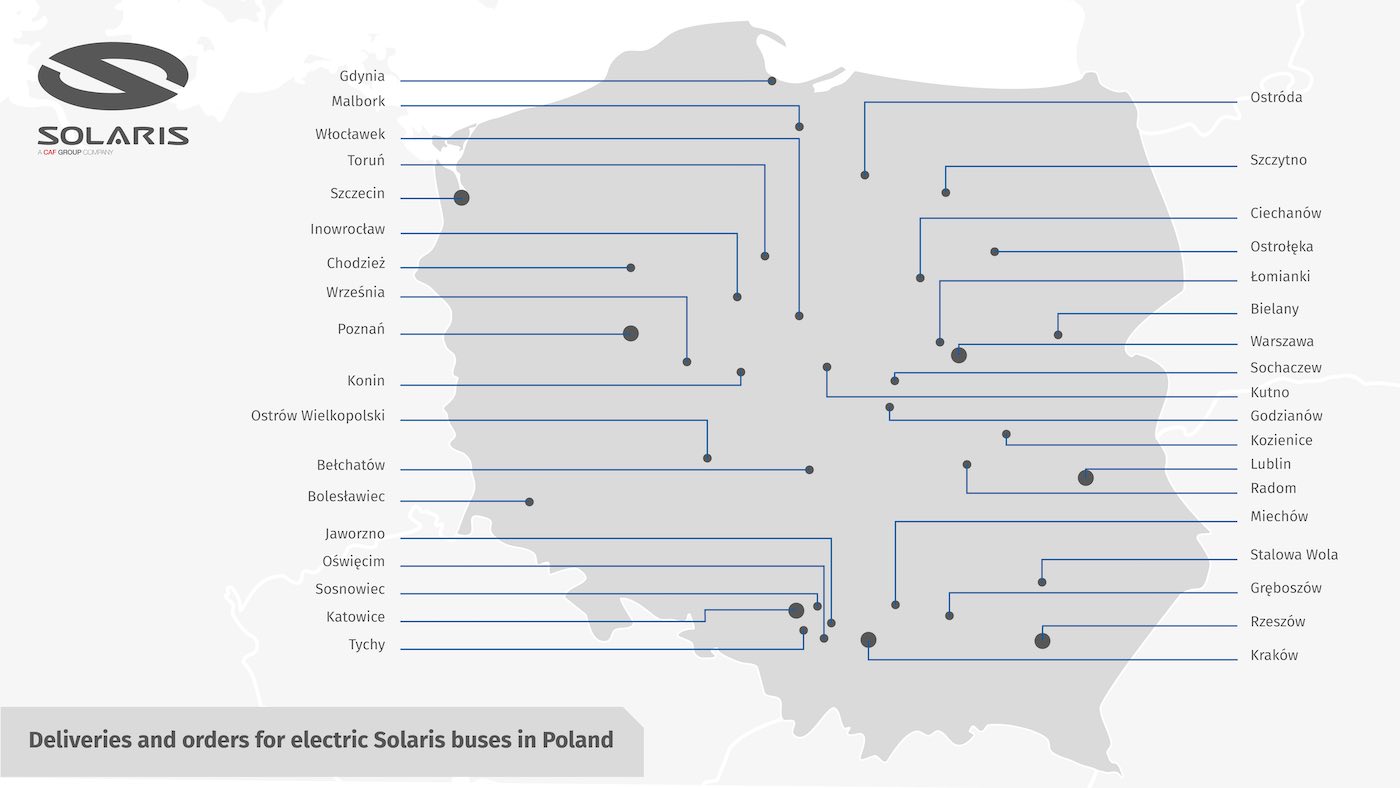 In the past months Solaris signed many significant contracts for the delivery of modern electric buses to Polish cities. The biggest orders were placed by Lublin, Cracow, Poznań and Katowice. All of these cities had used Urbino vehicles before. Thus, decisions to purchase new vehicles were spurred by direct experience in using these vehicles.

“It’s a great pleasure and honour for us to fill each and every order, irrespective of whether we deliver only one 8.9-metre electric bus or 130 Urbino 18 electric buses, as it is the case now for Warsaw. We can be proud, as any decision by local governments to purchase this type of vehicle is a step towards cleaner air and higher standard of living in Polish cities,” says Javier Calleja, CEO of Solaris Bus & Coach S.A.

Solaris sums up: «At the beginning of May the public transport operator ZTM in Lublin commissioned the bus maker from Bolechowo to manufacture 12 Solaris Urbino electric buses that would join the 15 Trollino trolleybuses and 20 e-buses of 12 metres ordered last year. Moreover, the Cracow operator MPK Kraków also opted for more electric vehicles, namely 50 Urbino 18 electric buses. Apart from a considerable number of articulated electric buses, 50 plug-in charging devices were ordered. Cracow has yet again opted for Solaris buses, since there are already 400 Urbino vehicles, including 26 Urbino electric, which cruise along the streets of the city. The operator MPK in Poznań where passengers have been benefiting from 21 comfortable Solaris e-buses for a few months now, placed an order for a batch of 37 electric-drive buses. 31 of these are Urbino 12 electric buses, and 6 are 18-metre articulated buses. More electric Solaris buses will also be delivered to Katowice. In June the representatives of the public transport carrier (PKM) signed a contract for five Urbino 12 electric buses, and then at the beginning of August – for 5 Solaris articulated electric buses. Following the completion of the latest order 20 modern, emission-free electric buses in total will be cruising the streets of the capital of the Silesia region. Moreover two electric blood collection buses cruise along the streets of Katowice. Solaris manufactured them for the Regional Blood Donation and Blood Treatment Centre and they are the first of this type in the world».