15 hydrogen buses in Cologne and ten further units headed to Wuppertal. Following the announcement of RVK with regards to the order for a batch of Solaris Urbino hydrogen, the Polish manufacturer transmits it will deliver 10 vehicles to WSW Mobil GmbH in Wuppertal as well.

Therefore, the affiliated transport company of the transport association Verkehrsverbund Rhein-Ruhr are to get a total of 25 hydrogen-fuelled Solaris vehicles. The two public transport companies have also ordered together a fleet of 40 Van Hool A330 FC fuel cell buses, currently on delivery. 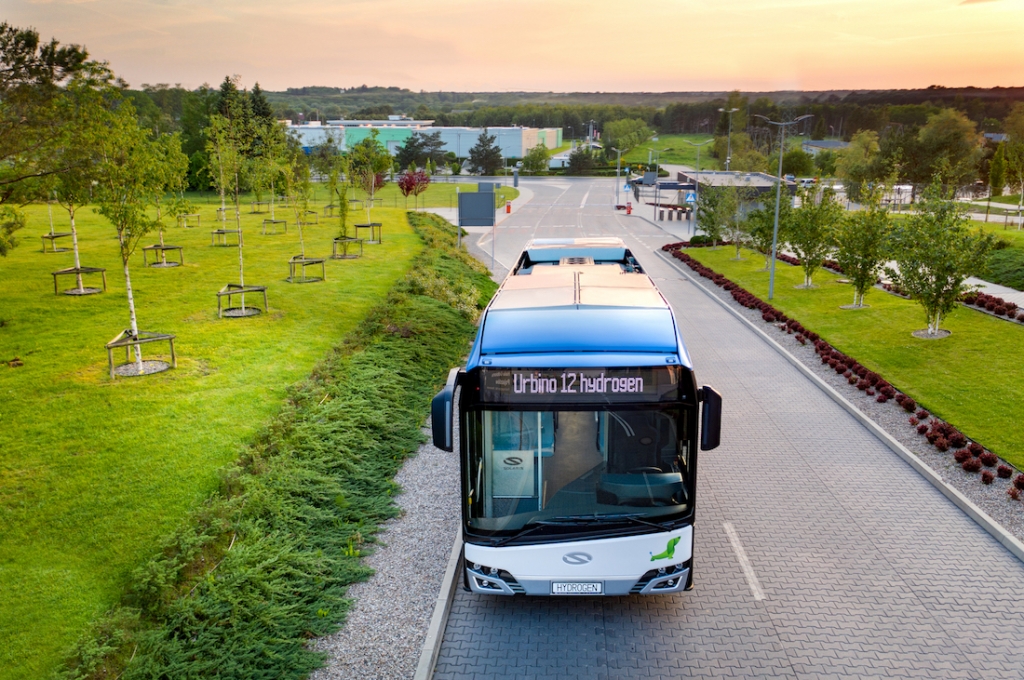 Not the first order for the Solaris hydrogen bus…

The order secured by Solaris with these two German customers is not the first placed with the Polish manufacturer for hydrogen-propelled buses. Solaris has already supplied two Urbino 18.75 electric to Hamburg and 10 trolleybuses to Riga, all of them fitted with hydrogen-based range extenders.

Meanwhile though, Italian operator SASA Bolzano has placed an order for 12 Solaris Urbino 12 hydrogen buses with technical parameters similar to those of the vehicles commissioned by WSW Mobil. These deliveries will be performed in 2021, whereas the first of the ordered buses will make it to Italy before the end of this year.

The first hydrogen buses in delivery this year

The first of the ordered innovative Solaris Urbino 12 hydrogen buses will make it to both cities this year, Solaris points out. The remaining vehicles will be handed over to the two operators by the end of 2021.

High Power batteries for 30 kWh to support the fuel cell

The hydrogen buses from Bolechowo will be also fitted with a Solaris High Power traction battery with a capacity of circa 30 kWh which is to support the fuel cell whenever the demand for electric power peaks. The battery will be recharged using energy derived from hydrogen and energy recuperated during the braking process. Electric power generated as a result of electrolysis will propel an axle with integrated electric engines.

The Urbino 12 hydrogen features cutting-edge solutions also with regard to the hydrogen storing technology. The element is accumulated in gaseous form at a pressure of 350 atmospheres in 5 new-generation tanks on the bus roof. The set of type 4 composite tanks, placed longitudinally above the first axle of the vehicle, has a volume of 1560 l and it ensures a hydrogen storage capacity of 37.5 kg. 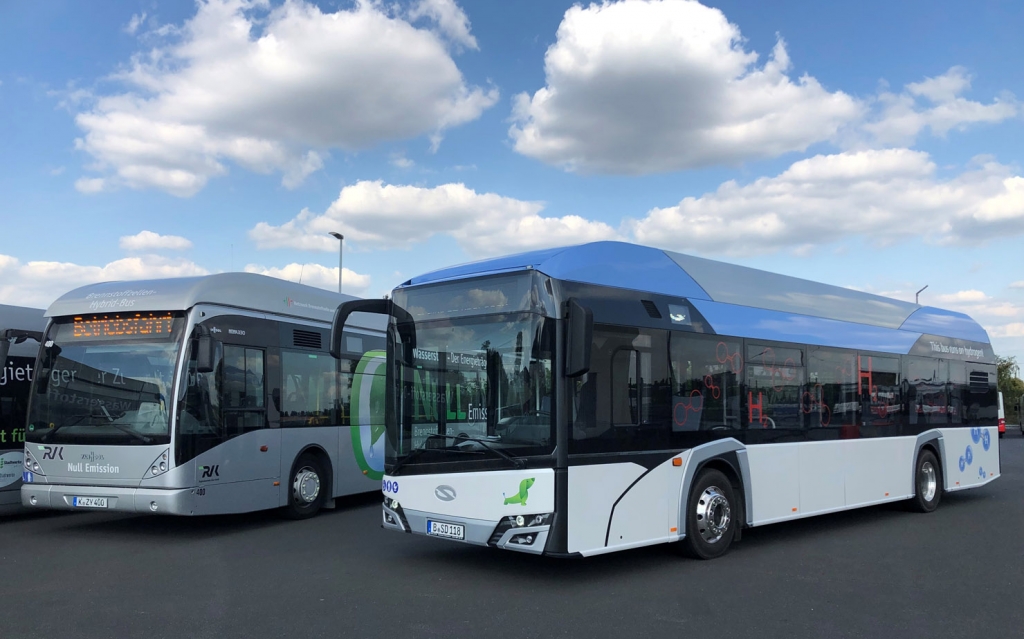 Aside from solutions applied in most modern city buses and which constitute equipment regularly seen in vehicles of Solaris, such as air conditioning, modern CCTV cameras, and an advanced passenger information system, the Polish producer is going to implement a range of state-of-the-art technologies in its innovative Urbino 12 hydrogen to facilitate the work of drivers, Solaris highlights.

These include above all the MobilEye Shield+ system which allows the driver to see more thanks to cameras placed outside of the vehicle and thus substantially improves the safety of passengers and other road users. The cameras detect pedestrians and cyclists staying in the blind spot of the vehicle, which is particularly important during turns. In such a case the system warns the driver by means of acoustic alerts and of light signals. Furthermore, the device similarly informs the driver about each pedestrian and cyclist who is up to 80 cm around the bus. The MobilEye Shield+ responds also when a vehicle leaves a lane without appropriately signalling so beforehand or when the distance to the vehicle in front is inadequate. The system also alerts the driver to collision risks, recognises speed limits and signals these to the driver on the display.

The Wuppertal-based client WSW Mobil GmbH has also opted for having its vehicles fitted with the eSConnect system which enhances the fleet management. The eSConnect system ensures remote access to updated vehicle data, which allows operators to quickly respond to potential malfunctions and to exercise better control over the driving ranges. What is more, the eSConnect system offers the option of generating personalised reports with historical data thanks to which the customer has also full access to sporadically appearing alerts and vehicle operating characteristics. Thanks to an analysis of these it is possible to schedule fleet operation ensuring highest operability. 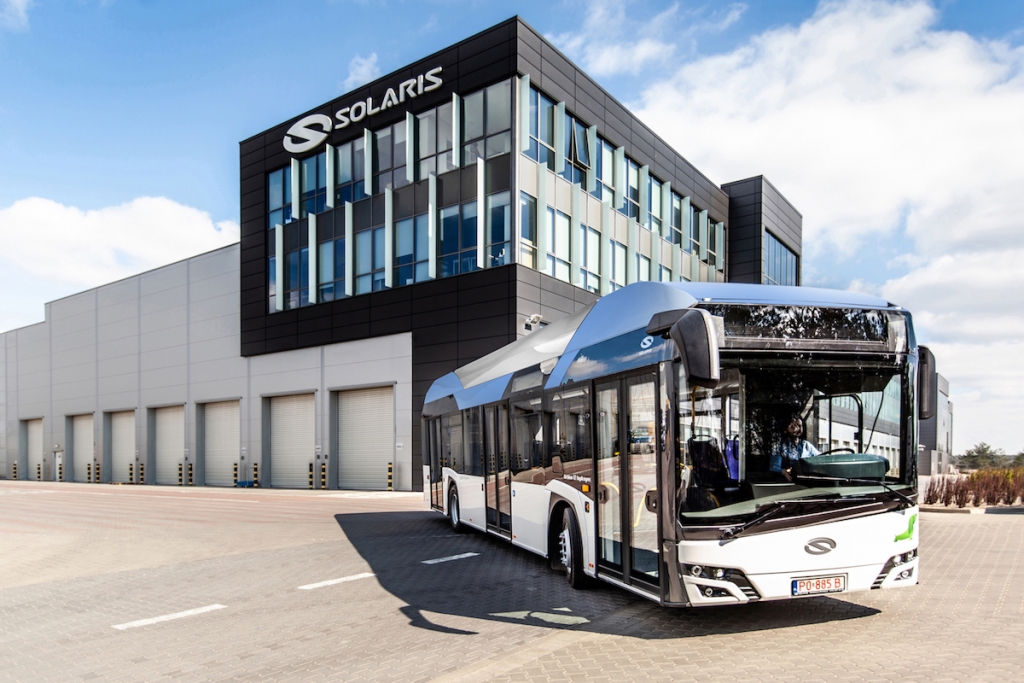