Connexxion will put into service hydrogen buses in the Netherlands, which prides itself to be the most dynamic country in Europe with regards to energy transition in public transport sector. An agreement with Solaris has been secured for the delivery of 20 Urbino 12 hydrogen. They’ll be in operation, according to the plans, from the end of 2021. Buses are financed under the JIVE and JIVE2 projects. The same model will be delivered also to Cologne and Wuppertal in Germany. Another operator is ready to deploy fuel cell buses in the Netherlands: it’s Qbuzz, that opted for Van Hool. 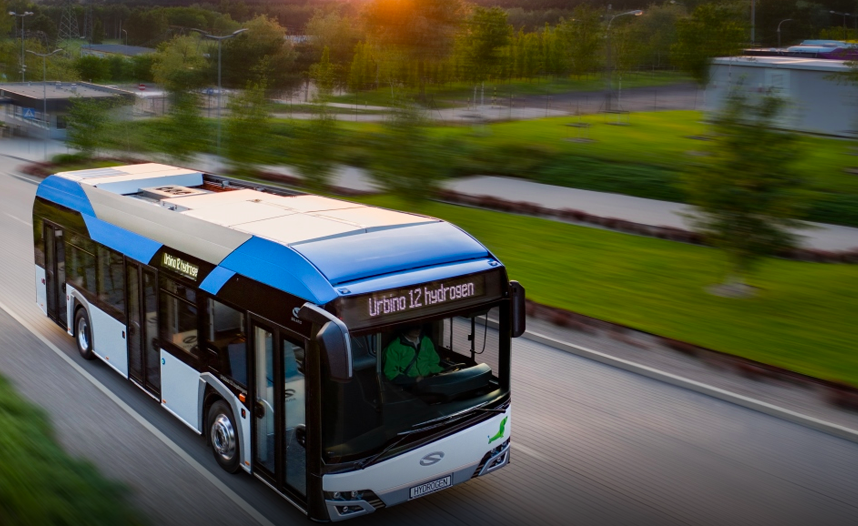 As reported on local medias, hydrogen buses will be deployed in the Hoeksche Waard and Goeree-Overflakkee transport area, in the south of Netherlands, by Connexxion, which belongs to Transdev group. South Holland is the most populous province of The Netherlands, located in its western part, along the North Sea coast.

The operator has already over 100 battery-electric buses in operation around Schiphol airport and will deploy further 156 Ebusco e-buses.

For the travelers, the new Solaris buses will offer USB charging points, air conditioning, clear information displays, and space for a wheelchair. The buses are fitted with mirrorless technology. Concurrently to the sales of buses, the parties signed a servicing agreement for 12 years.

The hydrogen on Solaris Urbino 12 hydrogen is stored in gaseous form in 5 new-generation tanks placed on the bus roof. The set of type 4 composite tanks, placed longitudinally above the first axle of the vehicle, has a total volume of 1560 litres.

“Our roads are becoming busier and busier. The health of our passengers and residents is of utmost importance to us, therefore putting into service of vehicles ensuring cleaner air is a great step forward“, says Floor Vermeulen, regional minister for Traffic and Transport in South Holland province.

“More and more municipal operators and decision makers opt for modern and emission-free transport solutions for their regions. The advantages of hydrogen as an energy carrier are indisputable. We are honoured to be able to participate with the operator Connexxion in these forward-looking decisions“, said Petros Spinaris, Deputy CEO of Solaris Bus & Coach S.A.

The first of the ordered innovative Solaris Urbino 12 hydrogen buses will make it to Cologne and Wuppertal already this year, Solaris points out. The remaining vehicles will be handed over to the two operators by the end of 2021.