Dr. Richard Group is the protagonist of a new test round of the hydrogen bus Solaris Urbino 12 in Austria.. After the test held in Vienna in June, the bus was handed over to the Dr. Richard Group, the largest private bus operator in Austria, which presented the vehicle in St. Pölten on 7 July 2020.

57 units are already in Solaris’ order book. The first vehicles will make it to Bolzano, Cologne and Wuppertal by the end of this year. A batch of 25 hydrogen buses is bound to the two German cities. SASA Bolzano has been the first operator to secure an order with Solaris for the fuel cell buses, that was unveiled at UITP Summit in Stockholm in June 2019.

Last but not least, Connexxion (Transdev group) will put into service hydrogen buses in the Netherlands, which prides itself to be the most dynamic country in Europe with regards to energy transition in public transport sector. An agreement with Solaris has been secured for the delivery of 20 Urbino hydrogen. 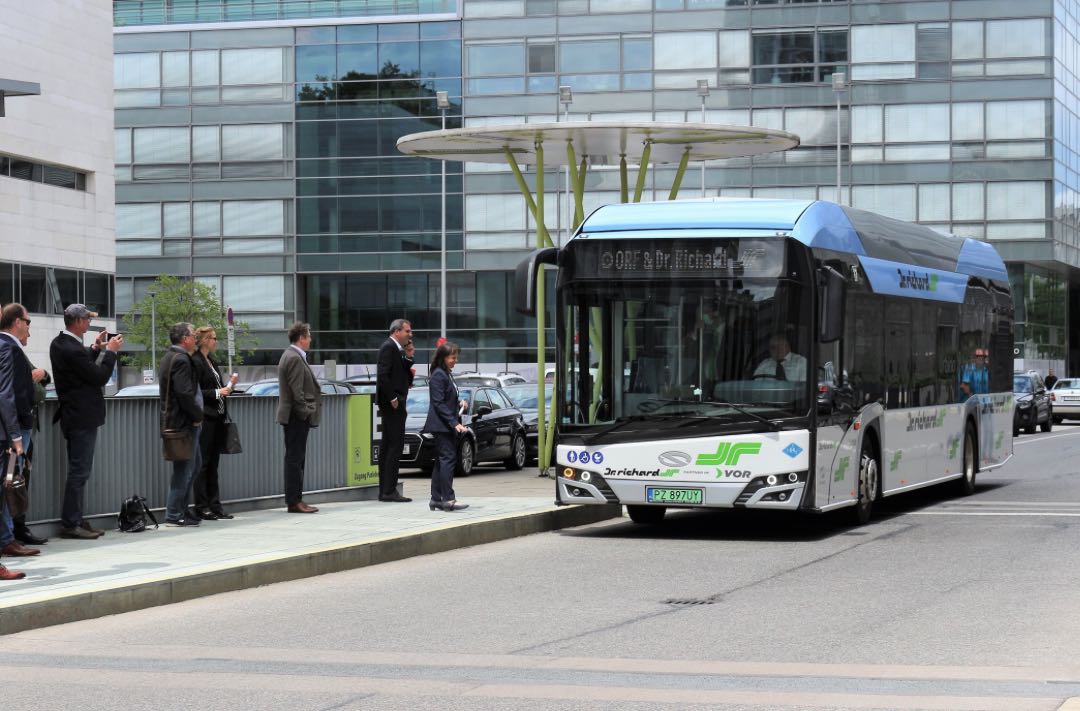 The Dr. Richard Group has begun tests of the Solaris Urbino 12 hydrogen that will be available for passenger rides from 7 to 10 July in Vienna and St. Pölten, Solaris highlights.

The Dr. Richard Group is the biggest family-run carrier in Austria with a fleet of nearly 1,000 buses, including the vehicles made by Solaris. The cooperation of the two firms started back in 2010.

The technologically advanced Solaris Urbino 12 hydrogen buses use a set of fuel cells with a power of 70 kW provided by Ballard Power Systems. The hydrogen is stored in gaseous form in five new-generation tanks mounted on the bus roof. The set of type 4 composite tanks (of the latest generation available on the market), placed longitudinally above the first axle of the vehicle, has a total volume of 1560 litres.

“The Dr. Richard Group has been dealing with emission-free mobility for a few years now. Over the course of numerous tests of battery buses we were able to gain a valuable insight into their practical operation and implementation. Now, for the first time ever, we have a chance to test a hydrogen-powered Solaris bus. The longer the distances to be covered and the heavier the vehicle itself, the more important this type of driveline is becoming, also in terms of resources needed to refuel. The relatively high costs still remain a barrier to a large-scale implementation of this particularly environment-friendly technology, but we look forward to the test which constitutes a significant milestone on our path to green mobility”, said Ludwig Richard, owner and president of the Dr. Richard Group.

“I am very glad that further trial runs of our new hydrogen bus are conducted in Austria. This state-of-the-art technology has already gained wide recognition among clients. Positive changes in public transport and its sustainable development will not succeed without the involvement of such firms as the Dr. Richard Group”, asserts Petros Spinaris, Deputy CEO of Solaris Bus & Coach S.A.

Snam, Toyota and CaetanoBus have signed a memorandum of understanding (MoU), with the aim of starting a «collaboration to promote and accelerate the introduction of hydrogen-based mobility». The companies signing the agreement – the energy infrastructure company Snam and the subsidiary Snam4Mo...
Hydrogen Europe and the S3 European Hydrogen Valleys Partnership cement cooperation to speed up the deployment of hydrogen in European regions. The partnership will enhance the development of hydrogen projects and foster economic prosperity across regional communities. It is a strong step towards im...
New Flyer has received a new contract from Foothill Transit for 20 fuel cell Xcelsior CHARGE H2 buses. This order is supported by Federal Transit Administration funds. This fuel cell bus order follows the order for 5 H2 buses commissioned a few days ago by GET, also in California. Still il Californi...
CaetanoBus has just delivered 10 hydrogen buses in Wiesbaden (Germany). The same city where a large batch of Mercedes eCitaro e-buses (the first with solid-state batteries) are running. Following the contract signed between representatives of the public transport operator of Wiesbaden and CaetanoBus...