ASRTU for a sustainable India

ASRTU and the sustainable public transport

BusWorld India has promoted and participated, with the contribution of the President Didier Ramoudt (standing in the picture below).

Sustainable-bus.com approached the topic of electrification. ASRTU, that came into existence on 13th August, 1965, to bring together all the State Road Transport Undertakings on a common platform, is faced with the problem of how to modernize the obsolete Indian public transport system in a very short time.

The ambitious goals of ASRTU claim to replace the diesel buses in three steps: by 30% in 2021, by 50% in 2023 and 100% in 2025. An epic endeavour, considering that in the only Bangalore metropolitan area run 44,598 buses. Some figures of a national trnasportation system? As many as 1,50,000 buses are operated by the seventy public sector State Transport Undertakings and Transport Corporations. Around 12.1 billion kilometres annually and more than 70 million passenger trips per-day.

This aspect was also highlighted by Uma Shankar, Managing Director of Karnataka STRC and Vice Preseident ASRTU. Shankar pointed out  the too high mileage of Indian vehicles. Considering that India has the unenviable record of 13 of the 20 most polluted cities in the world, an explosive mix emerges.

The first response of the Indian Governement to this emergency is the FAME program. Electric buses were sanctioned to 8 cities (Bangalore, Hyderabad, Indore, Lucknow, Jammu, Guwahati, Kolkata and Mumbai). In a second time, E-City buses were running in the towns of Shimla (the small capital of the Hymalaian State of Uttar Pradesh) and Mumbai (the Maharastra metropolis). It reminds us Ray Minjares, Clean Air Program, that the September 2017 agreement between BYD, Cummins, Scania, Volvo will ensure ‘soot-free’ engine technology in 20 megacities beginning in 2018.

Under the spot: battery

Battery cost is the 60% of the bus cost. Other critical issues are battery swipping, technology fast charging, limitations in terms of dedicated feeders. The proposals to tackle the problems of electricity in India echo what has already been seen in Europe and China. What does it mean? For first, subsidies, no upfront investments, operator to run E-Buses for 10 years and will be paid per km of travel, procurement of service and not the product, in general, an innovative contract structure. 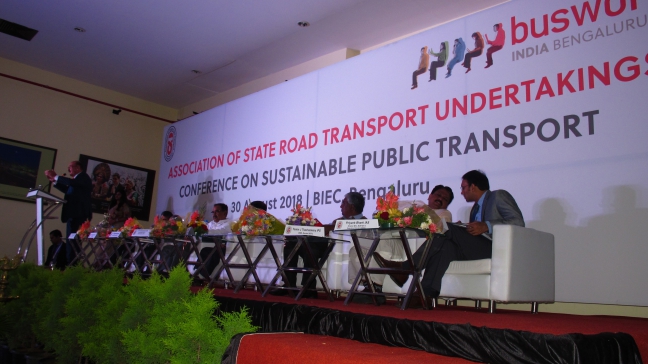 Ray Minjares enlarges the exclusive point of view focused on only electric mobility: Euro VI equivalent engines, to reduce immediately NOx, PM and, as a result of the adoption of refined diesel, a low level of sulfur into the fuel, and the enhancement of gas engines using biogas or CNG.

Nikit Abhyankar, a researcher at the Lawrence Berkeley National Laboratory in California, spoke about the reduction in the price delta between diesel and electric buses. The example quoted by Abhyankar is that of Dehli. Starting from an efficiency value of 1.3 kWh/km, for a distance traveled of 200 km/day, the total electricity consumption of Dehli is 450 GWh/yr, out of a total of 26,000 GWh/yr available in the Indian capital. There are around 5,600 buses running in Delhi.

So, fast charging infrastructure is crucial for aggressive electric bus adoption. Inevitable the comparison with the ‘bulky’ Chinese neighbor. In China 12 meters A/C electric bus costs are marginally higher than a diesel bus. The fast chargers (300 – 400 kW) have been deployed in several cities. The charging time? 1 hour, without any significant impact on battery life and performances. A suggestion from California? LTO batteries can perform better with fast charging than NMC or LFP.

In conclusion, the warning of Charles A. Silio, Vice President Agility Fuel Solutions, that we should not only consider the electrical solution, at least in the short to medium term. Initial replacement of the Indian diesel fleet could work with a mix of biofuel driven vehicles, Plug-in hybrids and electric vehicles.