Lithium-ion battery price will go down by 52 per cent between 2018 and 2030, and this (together with the rise of electric vehicles market) will drive the global energy storage market growing to a cumulative 857GWh by 2040 (now we are at 198 gigawatt hours). 1.2 trillion dollars will be invested in energy storage market by 2040.

These are the results of the latest “Long-Term Energy Storage Outlook” released a few days ago by Bloomberg New Energy Finance.

The fall in lithium-ion battery price

According to BNEF, the tumbling cost of batteries is set to drive a boom in the installation of energy storage systems around the world in the years from now to 2040. We already reported that, according to BNEF, the price of a 250 kWh electric bus battery pack is expected to fall from $150,000 in 2016 to $38,000 in 2030.

These figures about lithium-ion battery price where published on “Electric Buses in Cities” report in spring 2018. According to Yayoi Sekine, energy storage analyst for BloombergNEF and co-author of the report, the falls in storage systems cost was faster-than-expected, thanks partly “to a greater focus on two emerging applications for the technology – electric vehicle charging, and energy access in remote regions.”

The leading markets in battery. China will be leader

Logan Goldie-Scot, head of energy storage at BNEF, added: “We see energy storage growing to a point where it is equivalent to 7% of the total installed power capacity globally in 2040. The majority of storage capacity will be utility-scale until the mid-2030s, when behind the meter applications overtake.”

China, the U.S., India, Japan, Germany, France, Australia, South Korea and the U.K will be the leading countries.

These nine markets will represent two thirds of the installed capacity by 2040. In the near-term, South Korea will dominate the market, the U.S. will take over in the early 2020s, but will be overtaken by China in the 2020s. China will then lead throughout to 2040. 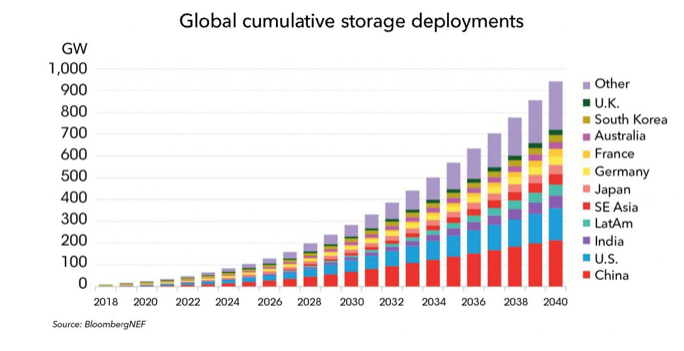 Growth of battery storage in Africa

According to BNEF, behind-the-meter, or BTM, installations will be sited at business and industrial premises, and at millions of residential properties. For their owners, they will perform a variety of tasks, including shifting grid demand in order to reduce electricity costs, storing excess rooftop solar output, improving power quality and reliability, and earning fees for helping to smooth voltage on the grid. Especially developing countries in Africa will also see rapid growth in battery storage. Utilities are likely to “recognize increasingly that isolated assets combining solar, diesel and batteries are cheaper in far flung sites than either an extension of the main grid or a fossil-only generator,” the report says.