Adoption of electric buses has increased more than 80-fold between 2011 and 2017. The World Resources Institute (WRI) has released two reports on the topic of battery electric bus deployment, putting Asian, African and South American cities in the spotlight.

The two reports, indeed, consider the experience of 16 city worldwide (only Philadelphia and Madrid have been considered in Western countries) analyzing different path cities have taken toward electric bus adoption, the enabling conditions for success, and common problems.

Electric buses typically cost  two or three times more  than conventional diesel buses . The benefits come from reduced emissions and reduced cost of ownership over the long term, WRI points out. Even if the breakeven point with diesel buses in terms of TCO, most situations, has yet to come (as McKinsey outlined).

In the case of Izmir, Turkey, according to the reports, «the operating costs for 20 electric buses led to an 84% reduction in fuel costs and a 60% reduction in total maintenance costs relative to conventional buses. Izmir’s usage of a solar power plant to provide electricity to charge the buses has resulted in an annual avoidance of around 420 tons of CO2 emissions». Also «In Shenzhen (China), the TCO over eight years (including bus procurement cost, CapEx, fuel cost, and OpEx maintenance costs) for e-buses in 2016 was almost the same as a diesel bus’s TCO», the report highlights. 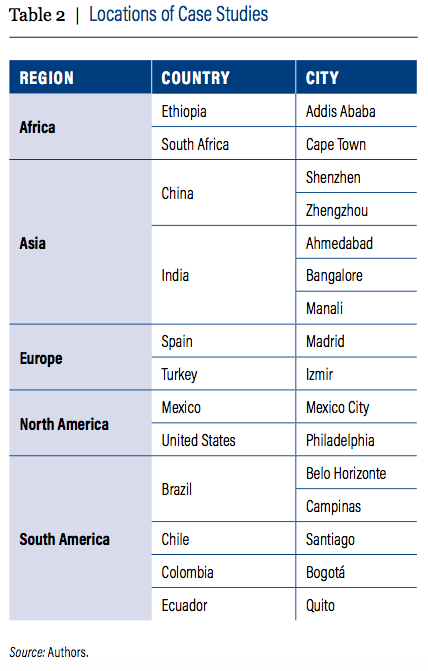 Financing is the main barrier to large scale ebus adoption, WRI points out. «The high up-front cost associated with e-buses is often cited as the primary challenge to e-bus procurement around the world», we read in the report focused on barriers, that continues: «Although there is general agreement throughout the transport industry that e-buses will become more price-competitive with conventional buses over time, it is unclear when, if ever, they will reach capital cost price parity with conventional buses».

Formalizing and implementing customized procurement plans that are more suited to the special characteristics of electric buses, as well as new financial instruments to diversify and reallocate costs and risks, have offered promising results in places like Santiago, Chile, which leads Latin America in electric bus adoption, thanks to a partnership between the energy provider Enel X and the operator Metbus. Also, many cities also state power limitations as a key barrier.

The report stress the point that «e-buses have very few moving parts in the engine and are thus expected to require less maintenance and have longer useful lifespans than their internal combustion engine counterparts». Their lifecycle will be more similar to that of a trolleybus or a tram than a diesel bus.

The barrier to electric bus adoption

Transit officials in Philadelphia found that existing electric charging capacity covered only about 7% of their bus fleet. Very few cities and national governments have planned for the  massive electricity grid upgrades  that will be needed.  In Zhengzhou, China, electric vehicles, including electric buses, are projected to comprise  36% of the city’s total electricity load by 2020.

Electric bus range remains an issue. «Range was cited as a barrier to increasing e-bus fleets in many cities – WRI authors write -. Many cities stated that, while some bus routes (usually routes with limited mileage, such as feeder bus routes and downtown circulators) are compatible with the range of e-buses, the current range of their e-buses was insufficient to cover other routes».

“Electric bus adoption to date has been extremely uneven, despite the value to be gained in reducing long-term operating costs, cutting air pollution, and combating climate change,” said Camron Gorguinpour, Global Senior Manager for Electric Vehicles at WRI Ross Center for Sustainable Cities and co-author of the reports. “Every city has run into some problems. This analysis helps others understand these stumbling blocks and how to avoid them.”