Which the average range of an electric bus? This is one of the main questions that public transport operators and authorities are asking themselves when they are dealing with a product, the battery-electric bus, which does not yet have a sufficient track record to allow certain evidence.

Certainly, it is known that the range of an electric bus is influenced by the outside temperature, the use of air conditioning systems and, above all, heating. Last but not least, the driving behavior is decisive as well. On the basis of the information gathered so far, let’s try to sum up what we can outline on the topic: how much does an electric bus consume?

Empiric figures come from the Ebus Test yearly held in Germany under the coordination of the specialized magazine Omnibusspiegel. In 2018, the test focused on 18-meter articulated buses. Three manufacturers took up the challenge: Bozankaya Sileo, Solaris, VDL. Following three days of tests in real operations condition on Bonn’s streets, the Ebus Test team measures the consumption of the vehicles, used to provide an average value between the competitors.

Then, which was the result? Consumption was between 1.65 and 1.84 kilowatt hours per kilometer. Heating off but air conditioning on. Around 20 per cent of losses during charging operation should be taken into consideration. Based on this data, a 18-meter bus with 350 kWh of capacity can cover a range between 190 and 210 kilometres.

And what about 12-meter e-buses range? (in winter)

Followingly, in 2019 the focus of Ebus Test was on 12-meter buses. This time, there were seven contenders on the starting blocks. The calculation of electric bus consumption was not easy, as temperatures were slightly above zero, so a considerable amount of the energy consumed went to heating. Also, not all vehicles were charged under the same conditions: some charging stations were located indoors, others outdoors.

Adding another bit to an already diversified mix, buses with a diesel-fuelled auxiliary heating system consumed less power than those whose ambient temperature control is entirely battery-powered. As is natural, diesel and power consumption levels are inversely proportionate to each other. 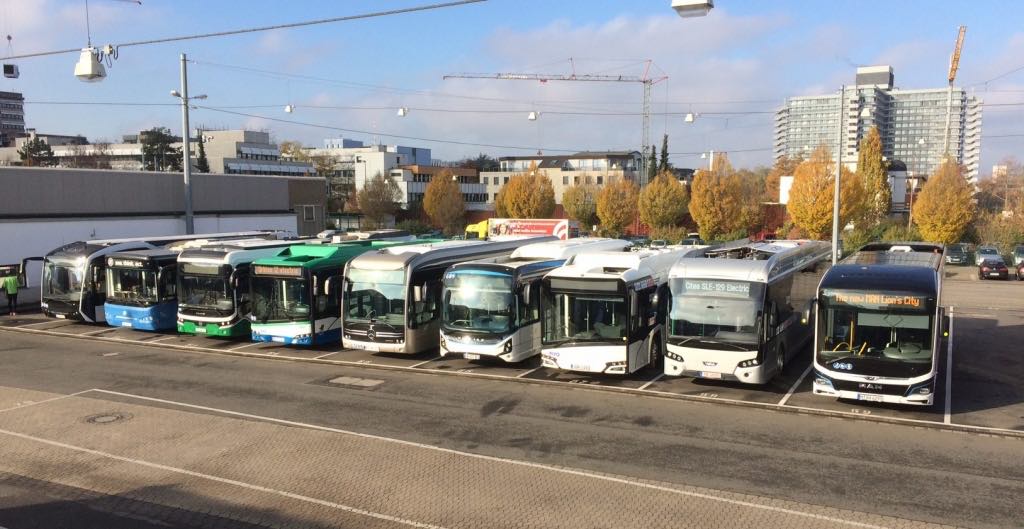 So, these were the results: vehicles heated with the help of an auxiliary fossil fuel heater consume from 110.5 kWh plus 20 litres of fuel to 144 kWh plus 6.4 litres. Power consumption on buses with full-electric heating, “diluted” over 100 km, stands in the range between 179 and 235 kWh. In other words, consumption is reported to span between 1 and 1.4 kWh/km on buses with fossil fuelled heating systems, and up to 2.35 on electrically heated ones.

That is to say: taking as a sample a solobus with (considerable) battery capacity of 300 kWh, range of the electric bus varies from 214 to 300 if diesel-heated and as low as 130 km if electrically-heated. A huge difference.

A few hints on this topics come from an interview we had with Viriciti COO and co-founder Alexander Schabert. ViriCiti is a Dutch telematics company founded as a startup in 2012 with the mission of providing fleet management platforms to operators, particularly with regards to electric buses. The data collected by the company can be useful to determine which is the average consumption of electric buses, and therefore their range on one charge.

«On average, a 12-meter bus has in the best conditions a consumpion of 0,8 kWh per km – Shabert said -. We are talking of operations in a normal day with 20 degrees, no much traffic and a skilled driver. Everything depends on the heating. A bus operating in the winter, for instance at minus 10 degrees, with electric heating turned on can reach a consumption of 2,3 – 2,5 kWh per km. With diesel heating it could be 1,5». 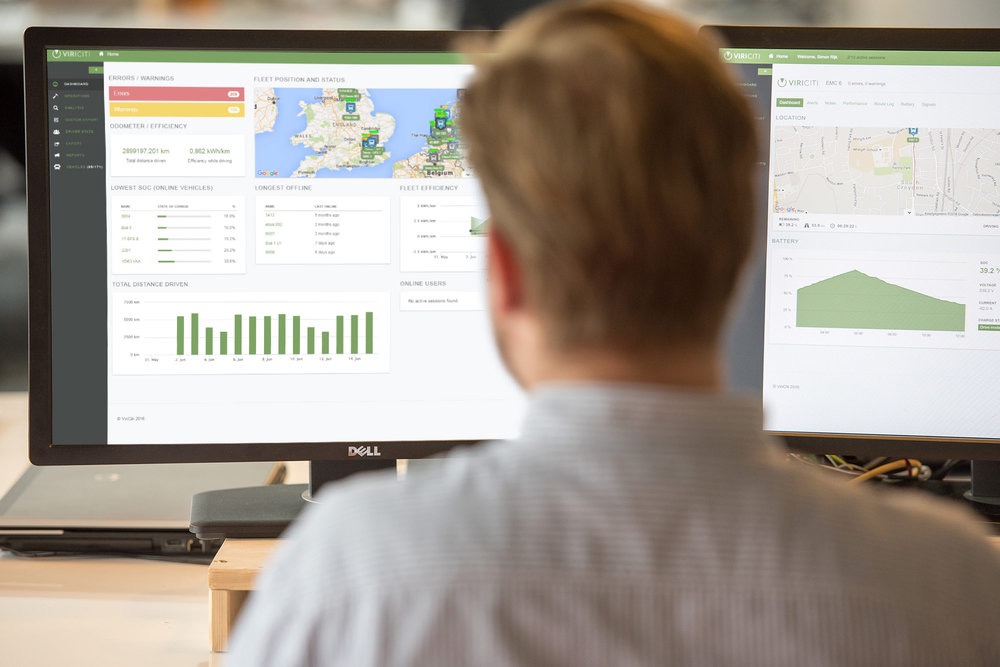 Making a quick calculation, based on the figures provided by ViriCiti, a sample 12-meter battery-electric bus with 300 kWh of battery capacity can cover, in the best days of the year, as many as 375 km. But on a winter day, the mileage decrease to a figure between 120 and 130 km, is electrically heated. Diesel heating allow a 200 km range.

The importance of driver for the electric bus range

Still Alexander Schabert from ViriCiti told us: «We see about 30 per cent impact from the driving behaviour. Drivers that don’t use regeneration because they push the brakes hard, and this activates directly the mechanical brake, regenerate only 5 per cent. But if the driver use regeneration he can achieve 35 to 40 per cent regeneration».

With regards to the impact of cold weather on the electric bus range, a study by CTE in late 2019 (realized in the US and funded under a National Fuel Cell Bus Program grant) showed that the switch to cold temperatures (between -5 and 0° C) affects the range of up to 38 per cent decrease in case of battery-electric buses, and up to 23 per cent decrease for hydrogen-powered buses. 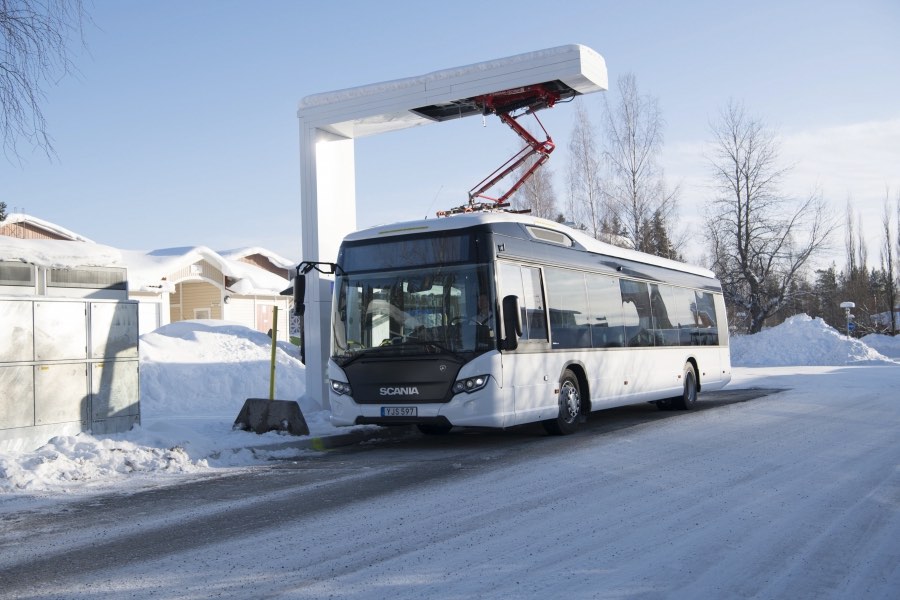 The study have been carried on by the Center for Transportation and the Environment (CTE), a nonprofit organization with a mission to improve the health of our climate and communities by bringing people together to develop and commercialize clean, efficient, and sustainable transportation technologies.

In October 2019, Iveco Bus marked a new record with the Iveco E-WAY 12-meter (Heuliez GX 337 Elec). The vehicle, in fact, covered as many as 527 km on a single charge during a test day. The bus travelled for 12 hours at an average speed of 46 km/h. Heating and air conditioning were turned off. But it’s fundamental to acknowledge that such a performance, although being remarkable, couldn’t be achieved in normal traffic condition. However, it stands out as remarkable. 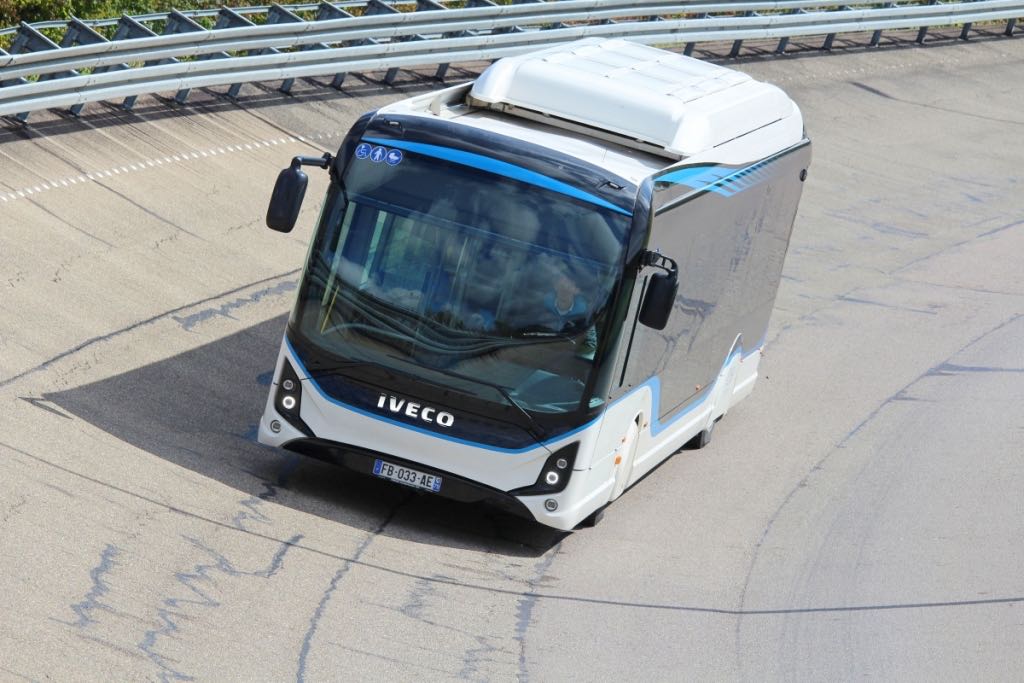 In spring 2019, the World Resources Institute (WRI) has released two reports on the topic of battery electric bus deployment, putting Asian, African and South American cities in the spotlight.

«Range was cited as a barrier to increasing e-bus fleets in many cities – WRI authors write -. Many cities stated that, while some bus routes (usually routes with limited mileage, such as feeder bus routes and downtown circulators) are compatible with the range of e-buses, the current range of their e-buses was insufficient to cover other routes».

New Flyer and MCI have been named as ZEB partner of choice by nine major transit agencies across America for the FTA’s 2021 Low-No program grants. The two NFI subsidiaries supported successful customer applications for over $40 million in FTA grants, NFI’s best Low-No performance ever in the six yea...
At the very beginning of 2022, ZF will launch the brand-new Commercial Vehicle Solutions, which combines the existing ZF’s Commercial Vehicle Technology and Commercial Vehicle Control Systems Divisions. The goal is to support the ambitions and projects of «truck, bus, coach and trailer OEMs, as well...
For the third time in a row, Madrid’s principal public transport operator, EMT Madrid, has placed a fleet order with BYD. 20 new 12-metre BYD eBuses make up the latest order and, when delivered, will take EMT Madrid’s total BYD fleet to 65. The contract was formally acknowledged today online by EMT ...
At First Bus, and across the industry, the NBS was warmly welcomed, as was the £3 billion financial commitment from the Government that it promised. If the sector works effectively together and is given what it needs by the government, we believe that the strategy could be fundamental in supporting ...