Munich, the MAN Lion’s City E at its debut in regular service operations. The battery-electric bus is being tested by MVG: during the field trial, the public transport operator is particularly focussed on the range. MVG is using the Lion’s City E on bus line 100 in Munich city center.

“Our aim for the next ten years is clear: we want to distance ourselves from oil, and move towards zero emission operations. For this, we need reliable electric buses that have a long range,” says MVG boss Ingo Wortmann. The aim of MVG is in fact to gradually change their fleet of buses over to emission-free drives. For this reason, Stadtwerke München (SWM) and MVG maintain innovation partnerships with different manufacturers. The companies also regularly test new electric buses.

MVG generally has five electric buses in use on line 100. More have been ordered and are expected to arrive in Munich this year. By 2021, MVG’s fleet of electric buses will comprise at least 26 vehicles. The buses will use 100% green electricity – just like the underground and tram systems. 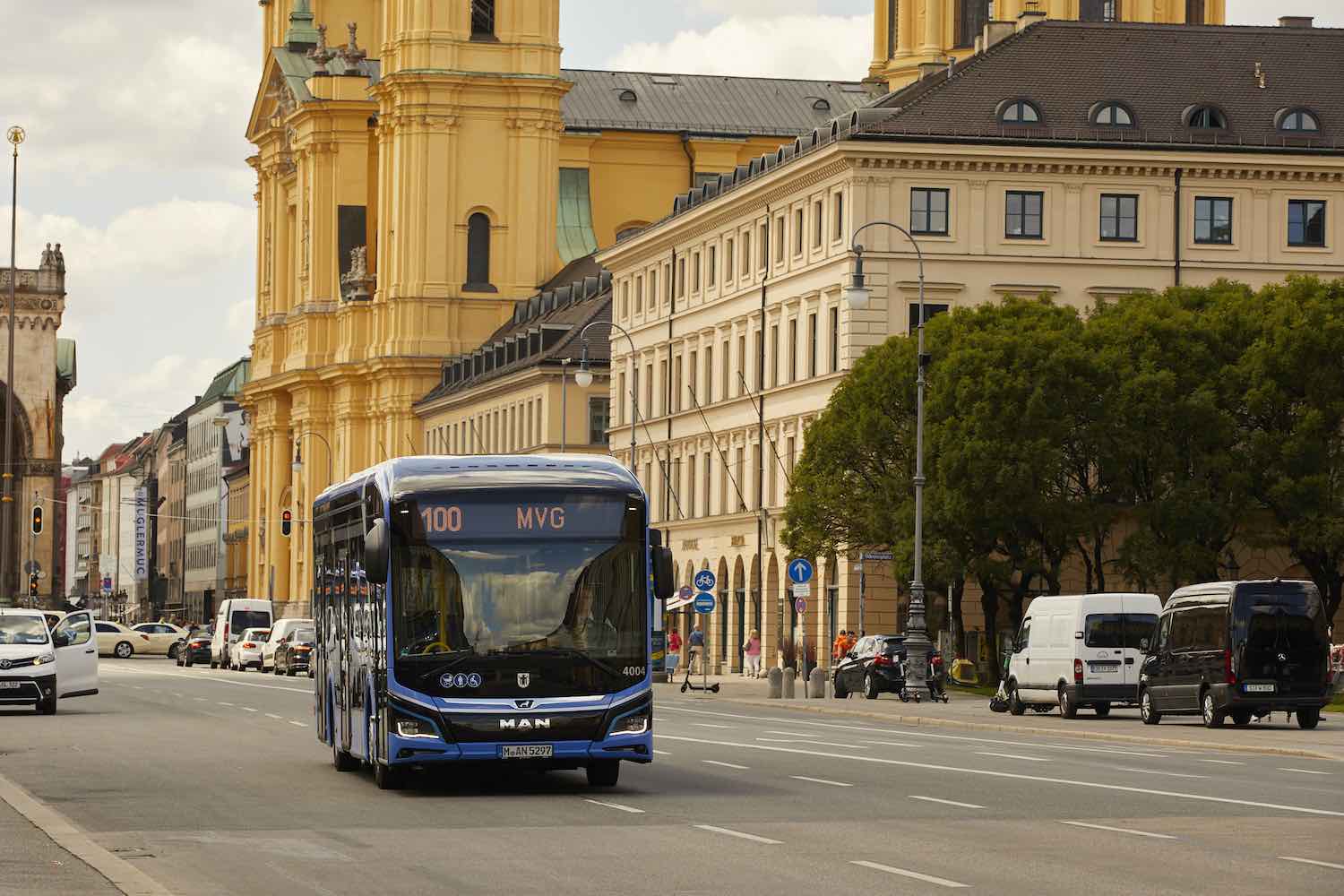 The electric bus MAN Lion’s City E is driving in Munich on the MVG “Museenlinie 100” bus route between the Hauptbahnhof and Ostbahnhof stations as part of a field trial. “This is a première as the Lion’sCity E is being used in regular-service operations in the Bavarian capital Munich for the first time,” says Rudi Kuchta, Head of Business Unit Bus at MAN Truck & Bus.

The solobus retains the colours and equipment of MVG completely, so it is instantly recognisable as a vehicle from the Munich public transport operator. Thanks to the three doors, a fast flow of passengers is ensured on the popular bus route. In total, the electric bus can accommodate up to 88 passengers. The design of the MAN all-electric city bus, which has won numerous awards, introduces dynamic new styling to the Munich cityscape. An impressive feature inside the vehicle is the optimised seating area in the rear, resulting from the omission of the engine tower. The developers used their creative freedom to create more appealing light conditions and install four additional seats here. 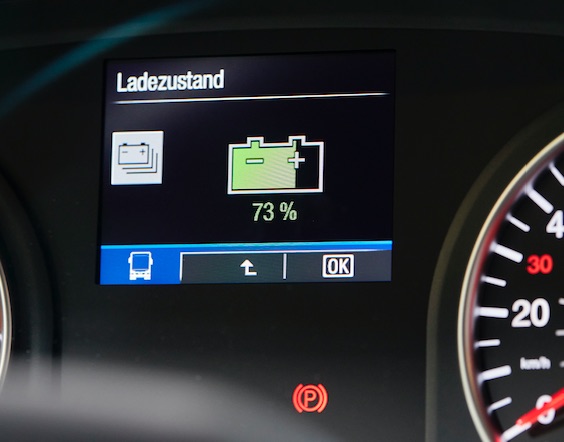 The electric bus is driven by a central motor on the rear axle. This is designed more simply and in a more accessible manner than motors in close proximity to the wheel hubs, according to MAN. The same drive axle is also installed as in the other models of the new Lion’s City generation. This provides advantages when it comes to maintenance work and the total cost of ownership (TCO). In the solobus, the fully electric driveline produces between 160 kW and a maximum of 240 kW.

The energy for this comes from six lithium-ion battery modules with 480 kWh of installed capacity. This allows the Lion’s City E toreliably ensure a range of 200 km (and up to 270 km in favourable conditions) over the entire service life of the batteries, the producer points out. With a charging power of up to 150 kW, the bus can be completely charged in less than three hours, meaning it is quickly ready for operation again. 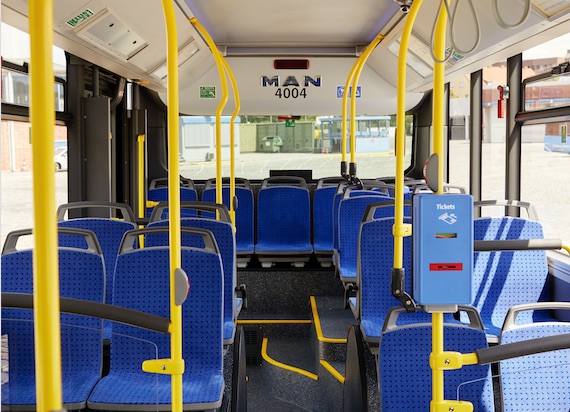 Battery cell technology from MAN on the Lion’s City E

“The topic of range is particularly important for SWM and MVG. Also how this behaves depending on the number of passengers and the climaticconditions,” says Kuchta and adds: “We are optimistic that MVG and MAN will be very happy with the results. After all, during development of the Lion’sCity E, we were able to use the sophisticated battery cell technology from the Group. At the same time, the batteries are adapted to the particularrequirements of city bus use. MAN’s own expertise is also demonstrated bythe sophisticated temperature management system which ensuresparticularly good availability no matter the time of year.”

“What is importantnow is powerful batteries, a low weight for the vehicles, and as much as possible efficiency when it comes to the heating and cooling systems,” says again MVG boss Ingo Wortmann. 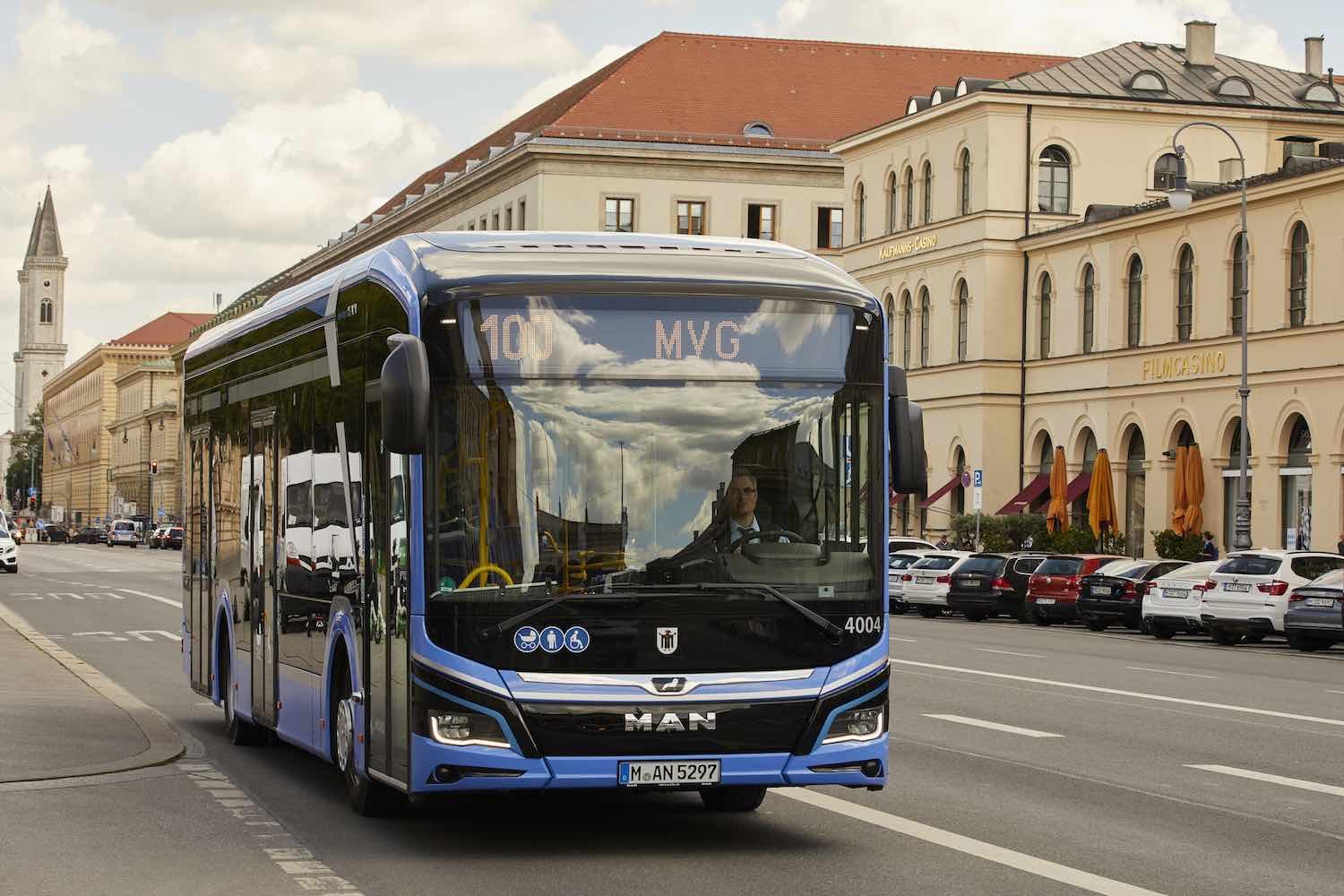 As part of the e-mobility roadmap, MAN has launched intensive field trials with the new electric bus in order to gain practical experience in regular-service operations. In 2020, the demo fleet of 15 electric buses will then be running customers’ services in five European countries (Germany, Spain,Luxembourg, Belgium, France). 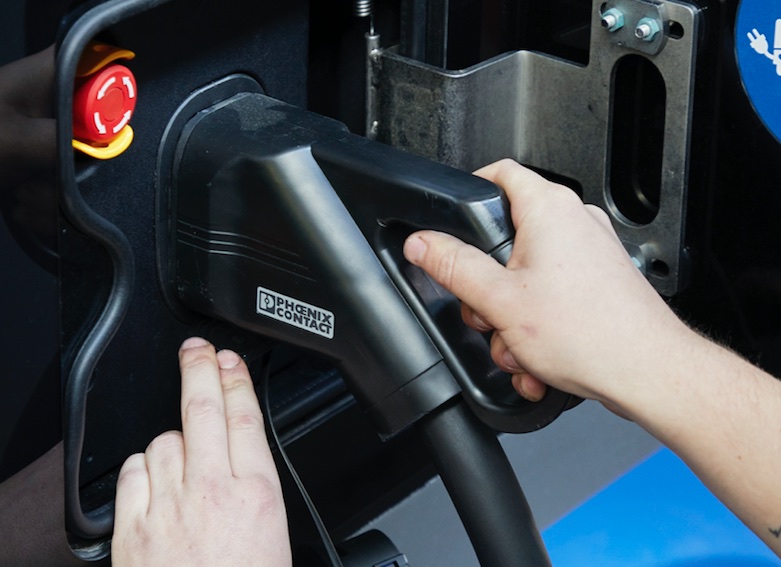 The first mass-produced MAN Lion’s City E 12-metre solo-version buses are set to be delivered to customers in the fourth quarter of 2020. The fully electric Lion’sCity E in the articulated bus version will follow approximately six months later, and should go into series production in the first half of 2021.

“We are particularly proud that one of the first new MAN electric buses is starting its planned regular operation on the streets of Munich,” says Rudi Kuchta. The subject of electrification has preoccupied and driven MAN for many years now. “Back in 1972 at the Olympic Games, top athletes were being transported in MAN electric buses in an environmentally friendly way, and ten years ago, we handed over our first hybrid bus that was ready for series production to the city of Munich. The launch of regular operation of thenew Lion’s City E on line 100 is now a further milestone on MAN’s eMobility roadmap,” highlights Kuchta.