The first two MAN Lion’s City E has been handovered today to the two Hamburg‘s public transport operator: Hochbahn and VHH (the latter has just signed the first tender-based order for the bus). A MAN’s demo fleet of 15 electric buses will be on the road in customer operations in five European countries as from 2020. A path opened today in Hamburg.

The first series production models MAN Lion’s City E in the 12-metre solobus version, are set to be delivered in the second half of 2020. This will be followed around six months later by the all-electric Lion’s City E in the articulated bus version, which is set to start series production in the first half of 2021, says Rudi Kuchta, Head of Business Unit Bus at MAN Truck & Bus. 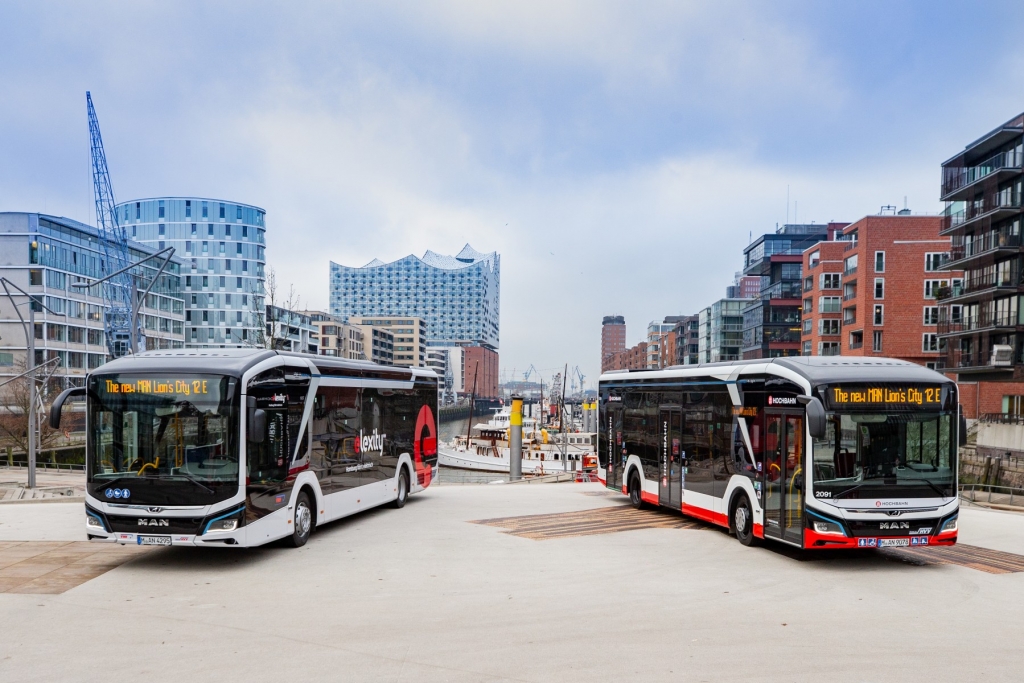 MAN Truck & Bus is collaborating with customers to run a demo fleet of 15 MAN Lion’s City E city buses as part of day-to-day operations, in order to gain comprehensive experience of how the vehicles operate in practice.

The two real-life MAN Lion’s City E vehicles (unveiled at IAA 2018) measure 12 metres in length and offer space for up to 88 passengers. The electric buses’ central motor is located on the rear axle. In the solobus, the all-electric driveline produces 160 kW up to a maximum of 240 kW.

The energy for this comes from the modular batteries with 480 kWh of installed capacity; here, MAN can rely on the fully developed battery cell technology from the Group’s modular kit. The Lion’s City E reliably achieves a range of 200 km, and even up to 270 km in favourable conditions, according to the manufacturer.

MAN has a clear roadmap for commercial vehicles electrification

“When it comes to e-mobility, MAN has a clear roadmap for trucks, vans and of course also for buses. We are proud and delighted to hand over the first two customer vehicles for the planned practical testing to the city of Hamburg,” commented Rudi Kuchta, Head of Business Unit Bus at MAN Truck & Bus, at the handover ceremony for the electric buses.

Peter Tschentscher, First Mayor of Hamburg, said: “We need new technologies and creative solutions in order to master the big challenges facing modern metropolises in the 21st Century – climate protection, mobility and digital transformation. These new buses form part of a strategic transformation in terms of mobility, which we will be pursuing in Hamburg over the coming years. Our city’s future transport system will be eco-friendly and convenient. We are significantly expanding our public transport system and will procure only emissions-free buses from 2020 onwards. Anyone travelling on the new electric buses in future will have a totally carbon-neutral trip, as the buses and trains in Hamburg’s transport network run on 100% green electricity.”

“Our aim is to have a completely emissions-free fleet by 2030. That’s why we greatly appreciate having MAN as an additional provider of emissions-free buses on the Hamburg market,” explained Henrik Falk, Chairman of the Executive Board at Hamburger Hochbahn AG.