Mercedes eCitaro REX. So it’ll be named the eCitaro with fuel cell range extender, that the German operator SWEG intends to use in regular service in southern Baden (Germany) from 2022. Mercedes announced yesterday the letter of intent signed with the public transport company. The bus will be tested in Hamburg in 2021. 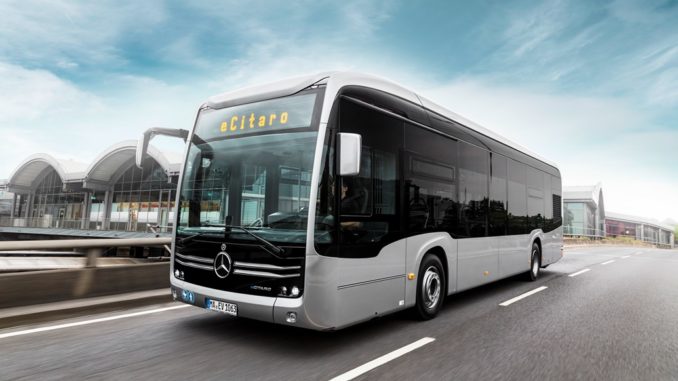 The range extender is a further step on the roadmap of improvements of the Mannheim-built battery-electric bus. This year the Mercedes eCitaro be equipped with new battery system by Akasol, that will allow an increase in the range. Following, solid state batteries will be optionally available.

In the meanwhile, Daimler is working on the fuel cell range extender, that will be the distinguishing feature of the Mercedes eCitaro REX. There won’t, in fact, any hydrogen-powered eCitaro, according to the company statements so far (although Mercedes developed strong experience some years ago with hydrogen buses, with some units still in operation). But the battery-bus will be offered in a version equipped with fuel cell range extender. This increases the range once again and allow the eCitaro, Daimler points out, to finally replace conventionally powered city buses seamlessly, even when very high demands are made on range. State range is 400 km.

SWEG to bring in operation the first eCitaro REX

SWEG is expected to initially use the two-door solo bus at its headquarters in Lahr from 2022. The company is currently developing a concept for supplying the city bus with hydrogen.

SWEG has the necessary electricity infrastructure to operate the twelve-metre long vehicle, and concepts for hydrogen supply are being developed, reports Lahrer Zeitung. No information have been provided so far on the amount of the investment and whether it will be one bus for the time being or several following ones. According to local media, subsidies from the state of Baden-Württemberg and the federal government will contribute to the purchase.

SWEG (Südwestdeutsche Landesverkehrs-AG) is a company headquartered in Lahr/Black Forest, which operates bus transport in urban and intercity traffic as well as rail freight and local rail passenger transport in Baden-Württemberg and partly in neighbouring areas. The company operates around 400 of its own buses and around 60 rented buses. SWEG employs more than 1300 people.

The transport company relies on environmentally friendly buses. In recent years, SWEG has tested many alternative drive buses, including gas-powered ones. The transport company also uses electric and diesel-electric hybrid buses. SWEG also pays attention to maximum safety, as demonstrated by the fact that the latest Citaro was equipped with the Sideguard Assist cornering assistant.

SWEG and Daimler have been working closely together for many years. As a demonstration of the strong tie between the companies, exactly 20 years ago Mercedes-Benz delivered the 1000th Citaro to SWEG, which last year celebrated the anniversary of 55,555 units.

“Our company has always been a pioneer in the field of new and sustainable forms of mobility,” says SWEG CEO Johannes Müller. “This is why we would like to gain experience in the field of hydrogen technology on site,” says future SWEG chairman Tobias Harms.

Ulrich Bastert, Head of Marketing, Sales and Customer Services at Daimler Buses, comments: “The eCitaro with fuel cell range extender is another milestone in the development of environmentally friendly city buses. We are delighted that our partner SWEG has chosen this advanced technology”.