Mercedes eCitaro, Iveco Crossway Natural Power in Normal Floor version, Futura FHD2. A battery electric bus with an ambitious development schedule ahead. An intercity gas powered vehicle that proudly inaugurates a new category. A coach whose driveline has been optimized to such an extent that consumption (and emission) levels marked new records.

These three vehicles have been crowned with the Sustainable Bus Awarwds in the categories ‘Urban’, ‘Intercity’ and ‘Coach’  respectively.

Sustainable Bus Awards 2020 have been handovered yesterday evening in Brussels, during the Gala Night that opened the first edition of Busworld in Brussels. 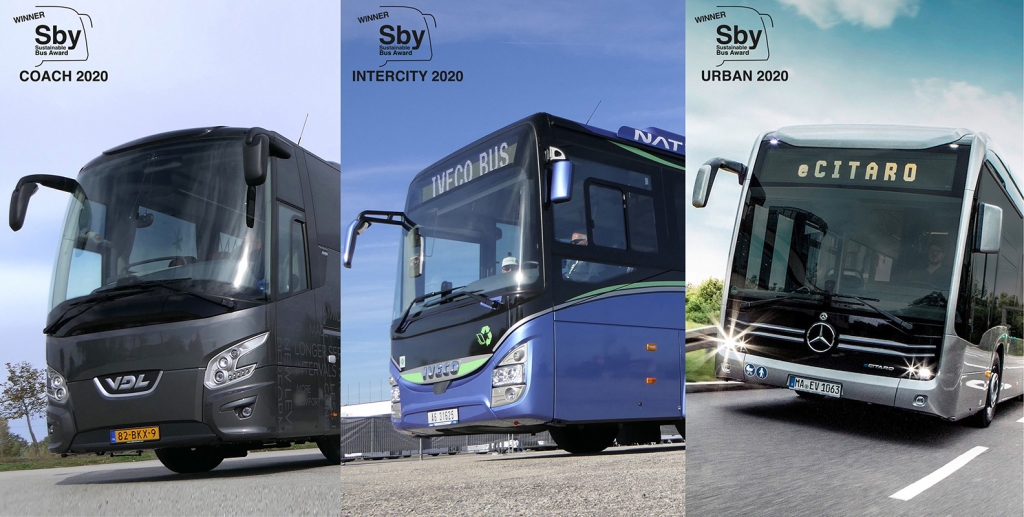 The Sustainable Bus Award for city buses (‘Urban’ category) has acknowledged the Mercedes-Benz eCitaro, the first battery electric bus from Stuttgard. Series production and supplies started at the end of 2018, and several cities such as Berlin, Hamburg, Oslo, Luxembourg have received it so far.

Among intercity buses, the Iveco Bus Crossway Natural Power Normal Floor has been crowned with the Sustainable Bus Award 2020. The decision of the jury confirms the appeal of gas powered drives in suburban bus sector. Finally, the VDL Futura FHD2 has won the prize as most sustainable coach, thanks to a successful optimization and a new, impressive, driveline.

Eight countries in the jury

The jurors, according to the rules (that can be read on www.sustainablebusoftheyear.com) chose the winner vehicles after three evaluating steps. First, each juror submits a list of candidates. All the candidates pass through a first numerical evaluation. Nine vehicles (3 per category) are shortlisted as finalists. At this point, manufacturers are asked to provide detailed documentation on the vehicles, answering the questions of jurors and make the buses available for test drives. Finally, each juror provides a detailed evaluation to each vehicle, taking into account more than 53 parameters split in the following groups: Engine, Transmission, Safety, Comfort, Sustainabiliy.

The award, that prides itself to be the first and only European award that acknowledges sustainability in the field of buses, must not be considered just a prize to the ‘greener’ bus.

Actually, Sustainable Bus Award is based on a cross-cutting idea of sustainability, intended as the ability to establish a positive image of the vehicle to the eyes of the general public. Several aspects can come into play, such as safety, comfort, noise, recyclability of components and the general environmental committment of the manufacturer.

The motivations for the Sustainable Bus Awards 2020

The Mercedes eCitaro battery electric bus wins the Sustainable Bus Award 2020 in the Urban category because today it represents the best compromise between sustainability, comfort and safety. Daimler Buses has also been the only manufacturer, to date, to declare a range that actually corresponds to that registered by the bus in real condition operations. Also, noticeably, Daimler Buses has stated that the current eCitaro is the starting point for future technological steps. The current Mercedes-Benz eCitaro features lithium-ion batteries for a maximum capacity of 292 kWh, that ensure a range of around 170 km in city operations (SORT 2). The eCitaro will be available with 330 kWh batteries by 2021. And a further step has already been scheduled, namely the use of solid state batteries. Also a fuel cell range extender will be implemented.

The Mercedes-Benz eCitaro features a completely flat interior floor that allows for top-level interior handling and easy access even for people with disabilities. On the safety side, ESP (Electronic Stability Control), SideGuard Assist (the first right-hand turn assistance system) and Preventive Brake Assist are also available. 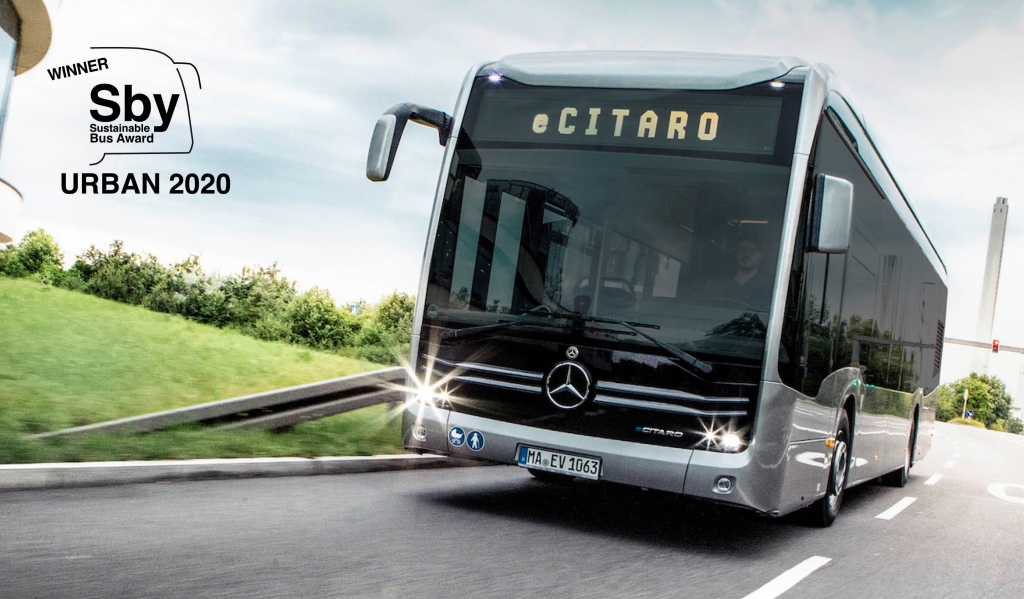 Following the 2018 success with the Crossway NP LE (Low Entry), this year the jury is awarding the Iveco Bus Crossway Natural Power as Sustainable Bus Intercity in its Normal Floor version. A model that inaugurates a new category and allows operators to deal with the topic of energy transition even in suburban routes where diesel engines, to date, have a full monopoly.

The Iveco Bus Crossway NP Normal Floor is powered by a 360 hp natural gas engine and, thanks to the positioning of the tanks integrated in the roof, ensures high manoeuvrability and a homogeneously distributed weight balance. This architecture has the advantage of preserving space in the luggage compartment, a crucial element for lines on extra-urban routes. 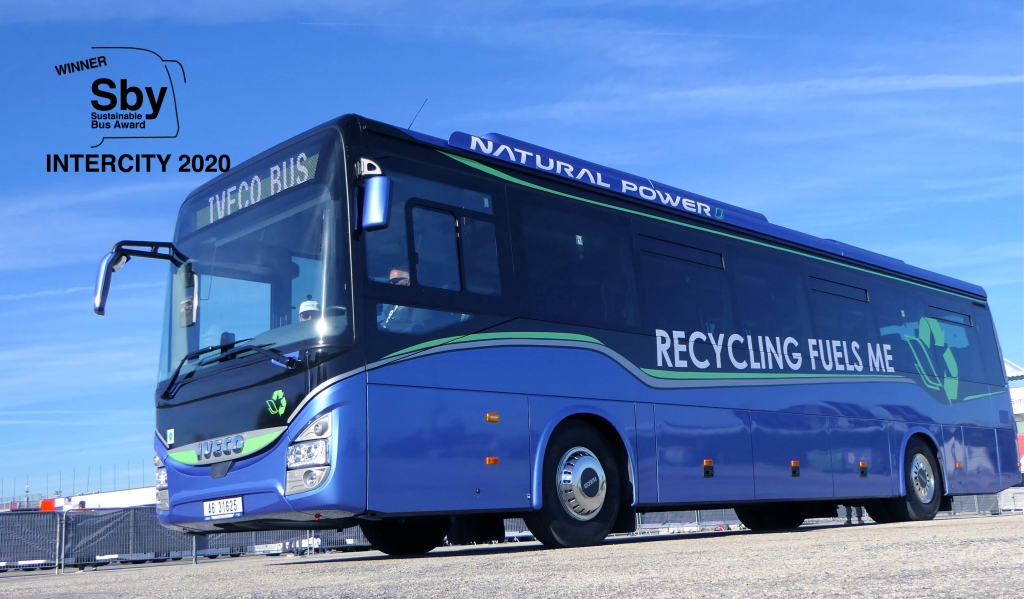 VDL Futura FHD2 is the most sustainable coach

Sustainable Bus Award 2020, Coach category, is assigned to the VDL Futura FHD2, thanks to the 100 kilos reduction of the total weight, to the frontal kneeling system that activates when the speed is over 95 km/h and to the Predictive Powertrain Control. Last but not least, the coach by VDL represents the best application so far of the new driveline composed by the Daf MX-11 (in a renewed version) together with the ZF Traxon transmission. Thanks to this full package, the 13-metre two axles version of the Futura FHD2 has set some fuel consumption records according to tests drive carried by several European magazines. 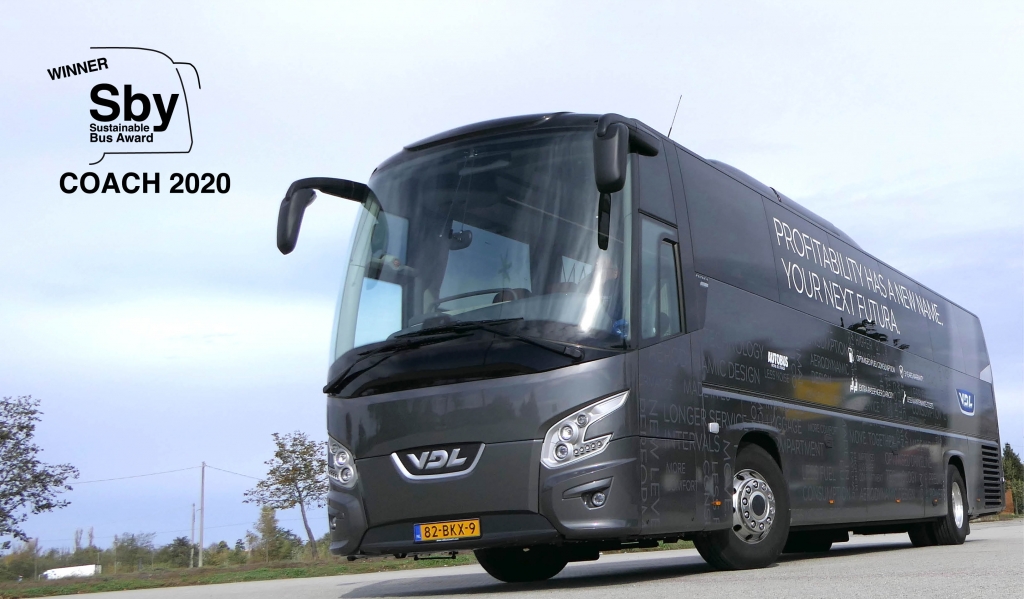