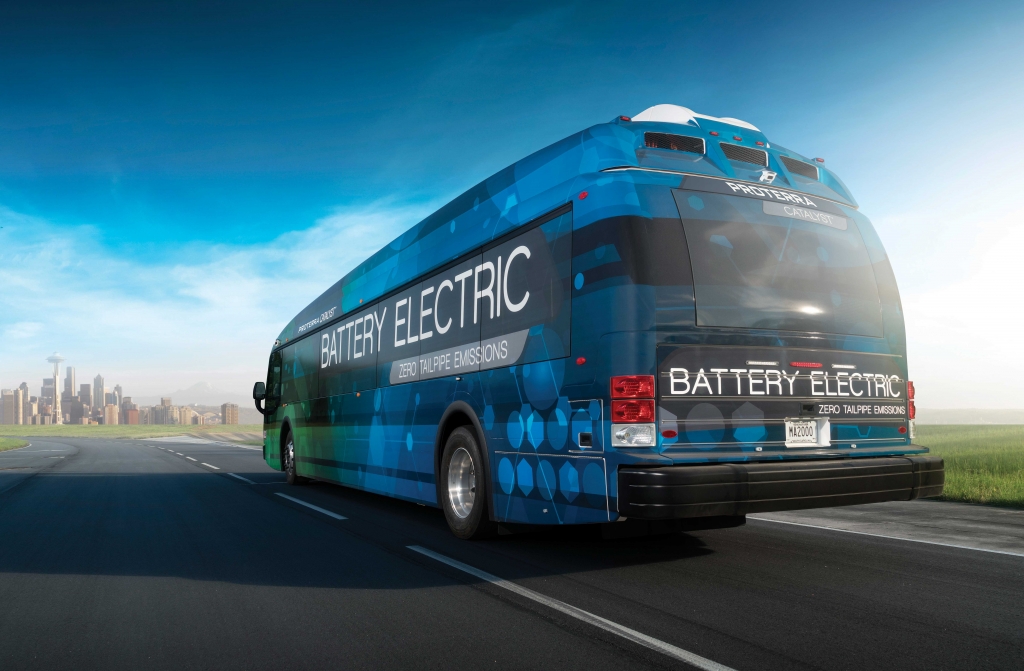 The order includes three Proterra Catalyst E2 electric buses (40 feet – 12 meter) and two Proterra 60 kW plug-in chargers. They’ll be deployed by Travel Plaza Transportation (TPT), a Hawaii-based subsidiary of JTB Hawaii, that has a goal to be Hawaii’s leader in offering tour vehicles that promote sustainability. Hawaii set its sights on becoming the nation’s first carbon neutral economy by 2045. Today, the state has the second-highest percentage of non-commercial hybrid or electric vehicles in the U.S., and Honolulu leads the country with the most per capita photovoltaic solar installations, says Proterra in a press release. Hawaii is particularly focused on reducing petroleum use in its transportation sector.

Proterra zero emission buses will replace three of JTB Hawaii’s 17 diesel-fueled transit buses. With the three new electric buses, according to Proterra, JTB Hawaii can avoid more than 8,250,000 lbs. of greenhouse gas emissions over the 12 year lifespan of the vehicles. JTB Hawaii plans to use the initial deployment to evaluate the combined maintenance, environmental and performance benefits of transitioning to all-electric buses.
Each year, TPT carries 1.5 million guests on tours across the Hawaiian Islands. JTB Hawaii (part of Japanese JTB group) plans to introduce the Proterra buses into service as part of its new “HiBus” program, and will use them to transport passengers between Waikiki and downtown Honolulu. All three buses will sport a bus wrap featuring artwork by local students with a focus on clean technology.

“Environmental sustainability is very important for Hawaii’s tourism industry, and we expect battery-electric buses to be a draw for visitors, who are increasingly focused on the environment,” said Yujiro Kuwabara, president of TPT. “Proterra Catalyst buses represent our first step in transitioning to 100 percent zero-emission commercial tour buses.” “Hawaii has set an example for other states by committing to ambitious clean energy goals, and we’re honored to be selected as the first battery-electric bus provider for JTB Hawaii,” said Proterra CEO Ryan Popple. “We look forward to working with JTB Hawaii to provide its passengers with clean, quiet, transportation and contribute to the continued preservation Hawaii’s natural beauty.”

A few days ago 18 Catalyst E2 electric buses have been purchased by the Port Authority of New York and New Jersey. They’ll be used for shuttle service at John F. Kennedy International Airport (JFK), Newark Liberty International Airport (EWR) and LaGuardia Airport (LGA). The order represents one of the largest electric bus fleet commitments of any airport authority in the United States. Six of the battery-electric buses are already in service at JFK, with LGA and EWR to each deploy six more in 2019.

Proterra and Daimler for the electrification of school bus market

Proterra and Daimler have entered into an agreement to explore the electrification of select Daimler heavy-duty vehicles. Specifically: school buses. Indeed, the first of the efforts that Proterra and Daimler will make together, Proterra reported at the end of September 2018, would be to explore potential synergies with Daimler’s Thomas Built Buses division by bringing Proterra’s proven battery and drivetrain technologies to the North American school bus market, the next frontier for zero-emission, commercial fleets, according to the two companies.