Temsa has started to produce Li-Ion battery packs for its electric vehicles’ range in its Adana plant. CEO Tolga Kaan Doğancıoğlu said: “Half of our buses will be electric by 2025”. Temsa has so far exported a batch of electric buses in Sweden and got the first order for vehicles jointly developed with Skoda. 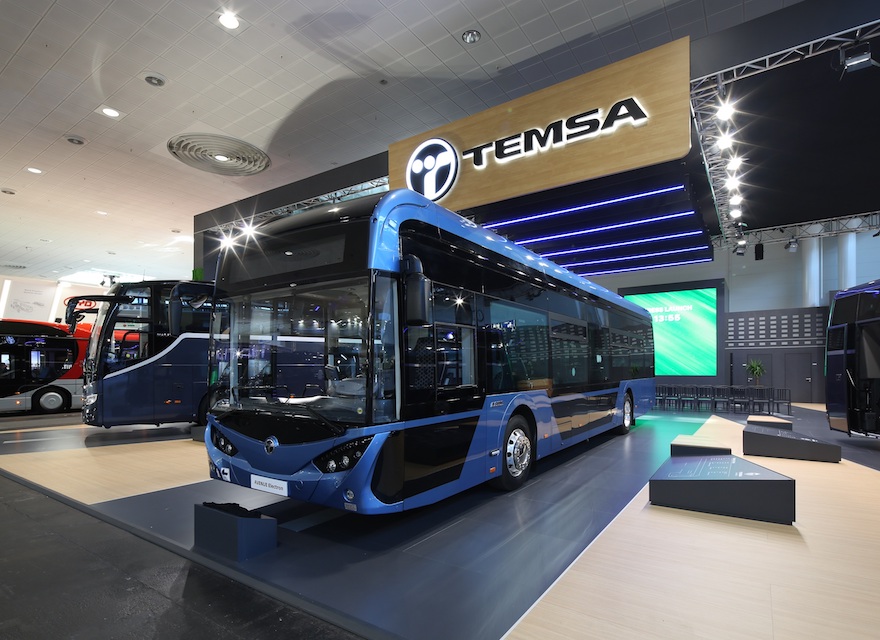 Temsa battery-electric bus portfolio is now made of two vehicles: the MD9 electriCITY and the Avenue Electron (12-meter). The MD9 electriCITY is a 9-meter electric bus with room for 26 seats and around 30 standing passengers. The motor is a PEM system with 100 kW of power. Motor supplier, according to the information released back in 2016, is TM4. The producer states a range of 250 km. Now the company made public that battery packs are being assembled in-house in its Adana plant, in Turkey.

TEMSA is owned by Sabancı Holding and PPF Group subsidiary. Highlighting the fact that Temsa has invested in R&D and innovation to a large extent for many years, Tolga Kaan Doğancıoğlu, CEO, says a platform called TEMSATech has been established within the company to engineer new technologies. Doğancıoğlu states that studies in many different areas like autonomous vehicles, power distribution and vehicle charging unit, and charging stations along with electric vehicles are conducted in TEMSATech and says, “Approximately 30 engineers of us work here and the electric vehicles we have exported to Sweden are a product of TEMSATech as well.”

Half of Temsa buses to be electric by 2025

Sharing information and their targets, Tolga Kaan Doğancıoğlu said, “We aim to meet over half of our total bus volume, with electric vehicles by 2025. We allocate around four percent of our turnover to R&D every year. We envision the share of exports in our electric vehicles will reach about 80 percent. When it comes to the short term, we are planning to reach a business volume that is 2-3 times larger than the previous year.”

Cevdet Alemdar, Industry SBU President of Sabancı Holding and Chairman of the Board of Directors of Temsa, said, “Today, we consider Temsa as not only an automotive company but an automotive-oriented technology company. Now we are developing and manufacturing the battery packs we use in our electric vehicles, with our own engineers and our own R&D team at Temsa’s Adana plant. Most recently, we have exported 6 Temsa powered MD9 electriCITY buses, in which we used the battery packs that we developed and produced in our own battery facility“.

Temsa electric buses: the US in the target

He adds:“We, as Temsa, delivered our first electric vehicle export to Sweden in the last month. Sweden is indeed the country that has possessed this technology for many years, presented a significant vision for this issue, and, maybe, is the most assuming one in owning this endeavor in the world. For instance, the world’s largest technology companies in the US use our Temsa-branded buses for the transportation of their employees. We will also see our electric vehicles there in the forthcoming period. TS45 is our popular model in the US. We are in the process of producing the electric model of this vehicle. A prototype is presently being tested in California. We hope that our electric vehicles we have produced in Adana, with their battery packs, hoods, and TEMSA technology, will be on the roads in different regions of the USA, particularly in Silicon Valley.”

Cevdet Alemdar sums up: “More than five thousand Temsa vehicles are on the roads of France. In the USA, one of the most competitive markets in the world, this number is over 1,000, and here we are in the top 5 in our segment. We want to achieve much greater success in the upcoming period in the USA.  We would like to undersign even greater achievements in the USA in the upcoming period. We believe that the North American market will be one of the engines of Temsa’s growth in the future. In the same way, we are very strong in the UK, Italy, and Germany. Now, we will grow fast in Central and Eastern Europe also through the strength of our partner PPF and Skoda Transportation.”