Trolleybuses have been chosen to play a major role in the future organization of Genoa public transport network. In fact, they are at the heart of the Italian city government’s projects. The city will soon receive 14 battery-electric buses, and in the meanwhile is planning a massive trolleybus network development that would require the purchase of as many as 145 trolleybus vehicles. End of the works is expected in 2025.

The city administration is about to present the new feasibility and technical study at the government, with a request for 471 million euros (after a first project worth 578 was rejected, while first talks were about a 650 million euros project). According to the plan, trolleybuses will be deployed on a system of four axes (Levante, Centro, Ponente, Valbisagno), with a total lenght of 96 km. 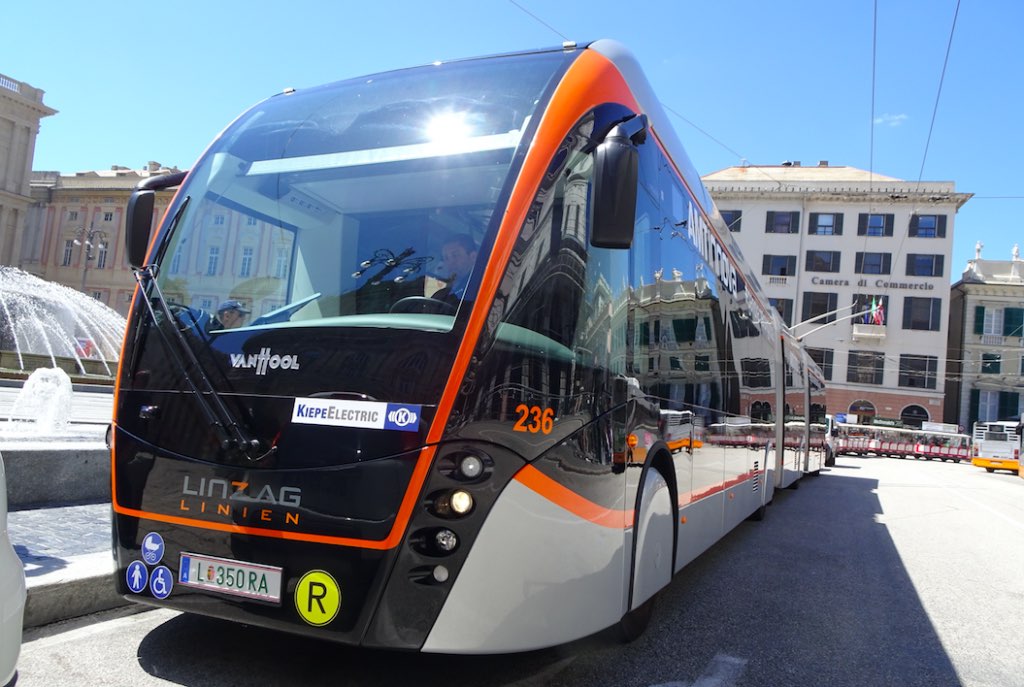 Genoa bets on trolleybuses against cars

The goal of the plan is a 8.1 % reduction in journeys by private vehicles, and a 24.3 % increase in journeys by public transport. In the city center, commercial speed is bound to increase at 14 km/h, while today it is 10.8 km/h.

24-meter trolleybuses are waited, in Genoa…

The purchase of 145 articulated trolleybuses with a maximum capacity of 155 people is planned; however, the (planned) modification of the Italian legislation, which today doesn’t allow the circulation of 24-meter vehicles, is expected. In fact, in May 2019, a 24-meter trolleybus with double articulation, built by Van Hool and lent by the Linz network, was tested.

The vehicle, tested on the section of the trolleybus line 20 from Foce to Principe (which would naturally be included in the new network) has shown excellent manoeuvrability. Depending on the equipment, a 24-metre trolleybus can carry from 180 to 200 people. It should be remembered that 24-metre trolleybuses account today for one third of the entire Swiss trolleybus fleet and are running since a couple of years in Linz (Austria).

The new trolleybuses in Genoa will be of course fully electric models equipped with battery packs and IMC technology, which will allow operation without an overhead line for more than 10 km, allowing for a definitely greater flexibility of operation.

According to the plans, a new depot will be built in Quarto district. The 10,000-square-metre facility would house 30 18-metre and 20 12-metre vehicles and would have an interchange car park with 230 parking spaces. The historic depot of Staglieno, on the other hand, would be demolished and replaced with a parking lot with 700 parking spaces. Gavette depot would be updated. Finally, the Sampierdarena depot should be able to accommodate up to 150 trolleybuses after renewal works.

If the plan will be approved, the start of the first batch of works would be scheduled by September 2021.

New Flyer Industries Group congratulated the Champaign-Urbana Mass Transit District (MTD) on the unveiling of its first in America renewable transportation project. MTD’s “Riding on Sunshine” project will see the deployment of zero-emission, fuel cell-electric Xcelsior Charge H2 buses from NFI subsi...
A picture of the development of hydrogen technology in public transport, and an informed view on future scenarios. These were the goals pursued by the webinar “Hydrogen buses. Their time is… now?”, organized within the Sustainable Bus Tour 2021 and broadcasted Thursday 14th October...
ABB will enable the transition to sustainable e-bus operations in the city of Basel by 2027 as part of a large order awarded by Industrielle Werke Basel (IWB). The contract is part of Basel Public Transport’s (BVB) efforts to convert its entire bus fleet to battery-electric operations. In one ...
CNH Industrial just announced that it will temporarily close “several of its European agricultural, commercial vehicle and powertrain manufacturing facilities in response to ongoing disruptions to&nbs...