New battery-powered trolleybus deal for Van Hool in Italy: following the batch of vehicles headed to Rimini, the Belgian manufacturer secured a contract for six vehicles (with option for further three) in Pescara and Montesilvano, on the Adriatic coast, where a new overhead system will be implemented. The vehicles will be equipped with the new IMC500 technology from Kiepe Electric (Knorr-Bremse group) 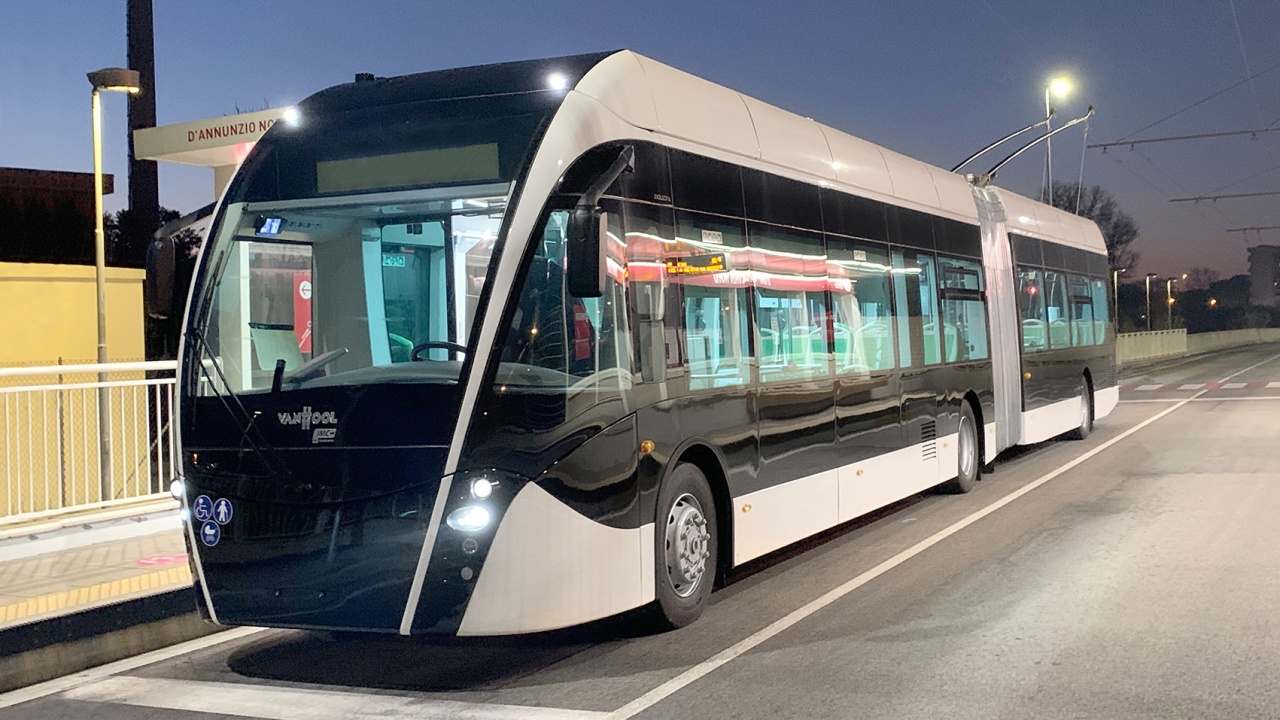 TUA (Trasporto Unico Abruzzese) has commissioned Colas Rail Italia with forming a consortium to realize this local transportation project in Pescara, Knorr-Bremse points out in a press release. This involves not only constructing the overhead line infrastructure but also procuring the vehicles and led to an order for six IMC500 buses being placed with Kiepe Electric and Van Hool, with an option for three more. Kiepe Electric is to supply the entire high-voltage system with traction equipment for the dual-axle drive, static converters, battery chargers and the batteries, and IMC current collectors, complete with diagnostic systems.

A new e-BRT in Pescara, with Van Hool trolleybuses

The IMC buses will operate on an IMC charging road with all-new and attractive infrastructure: The eight-kilometer link between the two coastal cities of Pescara and Montesilvano is designed exclusively for bus traffic and can also be operated as an e-BRT (Bus Rapid Transport) line. As IMC buses recharge their batteries while running on sections with overhead lines, their IMC technology means they can also serve destinations with no overhead lines. Outside the overhead line infrastructure, the buses operate on battery power, giving them greater flexibility in their choice of route. The plan is to use this flexibility to extend the route as far as the Pescara Court of Justice.

The famous seaside resort of Rimini is currently running acceptance tests for its new IMC trolleybuses, that experimented some delays in the supply. The vehicles are destined to serve the new Rapid Coast Transport (Trasporto Rapido Costiero – TRC) express line from Rimini to Riccione.

According to Alexander Ketterl, Managing Director of Kiepe Electric: “In Pescara’s local transportation system, TUA is taking a pioneering step with the introduction of the new IMC system which is already an established part of the street scene in many Italian cities. Our state-of-the-art IMC500 technology with travel on sections of the route with no overhead lines, will contribute to efficient and eco-friendly local transportation in the delightful coastal region of Pescara.”