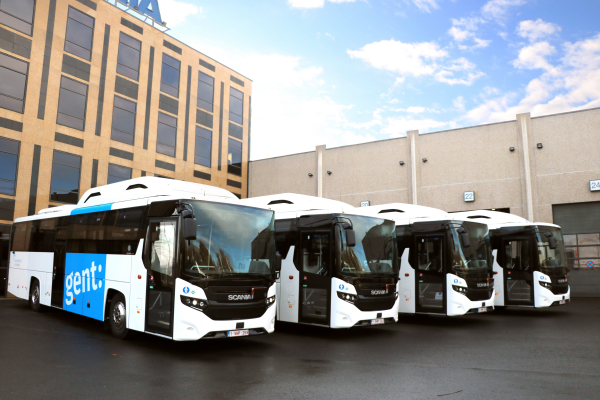 Ghent’s sustainable mobility plan, launched in 2016, is already showing results with nitrogen dioxide levels that have fallen by 20%, according to Scania. The target is to reduce transport carbon emissions by 40% (compared to 2007) by 2030. In addition to the four new buses, the city has ordered 11 Scania natural gas trucks to be delivered this spring.

The 12-metre Scania Interlink Low Decker offers 51 seats with seatbelts and additional space for standing passengers. Ghent’s school buses are equipped with blind spot cameras as well as side and rear view cameras. The driver is aware of nearby pedestrians and cyclists through audible alerts.

Scania is also opening the path to the adoption of LNG buses in public transport. The manufacturer will in fact supply 15 Interlink LNG to TPER Bologna by the end of the year, following the very first European call for tender on LNG buses. LNG technology already reached maturity in truck field (only mention manufacturers such as Iveco, Scania and Volvo). Scania took advantage of the know how developed on trucks to produce not only the Interlink MD coach unveiled at IAA 2018 (the first LNG powered coach in the world) but also the LNG bus Interlink LD. A product that is part of the strategy developed by the Swedish brand on the topic of sustainability outside urban centres.