SPIE becomes formally Heliox partner for installation, service and maintenance of charging infrastructure, after two years working together. The two companies entered in a service contract signed a few weeks ago in Heliox headquarters in the Netherlands.

The service contract was signed by Mark Smidt, Managing Director Heliox Automotive BV, and Peter Arnet, Group leader for the e-mobility taskforce at SPIE. Heliox is among the main provider of charging infrastructures for electric buses in Europe, together with ABB, Siemens and the newcomer Ekoenergetyka-Polka, that has gained ground in this emerging market winning a contract for 62 charging station for Paris. 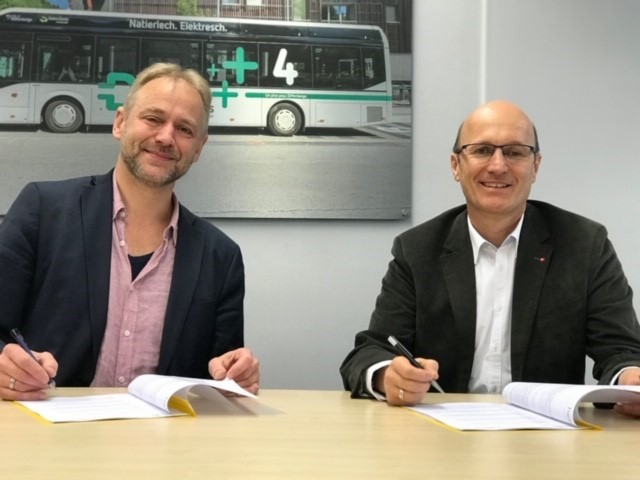 Heliox, not only in the Netherlands

After having powered numerous battery electric bus systems in the Dutch cities of Rotterdam, the Hague, Groningen, Amsterdam Schiphol Airport area, Maastricht, Venlo and Eindhoven (without forgetting Oslo in Norway and Luxembourg and New Zealand), Heliox has also become the fast charging partner in the further electrification of Amsterdam as a city. The company (that won one of the EBUS Awards 2019) supplies both opportunity and overnight charging systems (from 25 to 600kW). Of course the Netherlands-based company is not active only within public transport but also in marine, mining and port equipment.

A logical step for Heliox and SPIE

SPIE, on the other hand, is an independent European leader in multi-technical services in the areas of energy and communications. It has more than 46,400 employees and achieved in 2018 consolidated revenues of €6.7 billion and consolidated EBITA of €400 million. The company has worked with Heliox for two years already. Now Heliox is formalizing the working relationships with its preferred partners. Managing Director Heliox Automotive BV Mark Smidt explains: “Heliox is extending its charging infrastructure network around Europe and is looking for trusted and reliable partners to further sustain the operation of EV-fleets of existing bus OEM’s. Following the positive and constructive cooperation with SPIE in the past, this was a logical step to take.”

With this partnership, SPIE once again underlines its aim to play a major role on the electro-mobility market, the partners write in a press release. Jérôme Vanhove, SPIE Group strategy, development and M&A director and signatory to this partnership, points out that “SPIE has proven to be a first-rate partner in the installation, maintenance and operation of charging infrastructures. The growing development of this segment enable SPIE to consolidate its position as a key player in the Smart City and energy transition markets.”

With a long-lasting presence in the public transport market, SPIE is expanding its offer as Peter Arnet explains: “We’re currently acting as installers on pan-European projects, particularly in the field of high-power charging solutions, like with Ionity. With this partnership with Heliox, we are widening our expertise in charging station for public transport.”