A call for tender for 594 electric buses. Chinese manufacturers are on the front line. The maxi order is up for grabs in Colombian capitol city Bogotà, where the city government plans to introduce a large batch of electric buses into the urban public transport system, hitherto monopolised by diesel and gas drives. 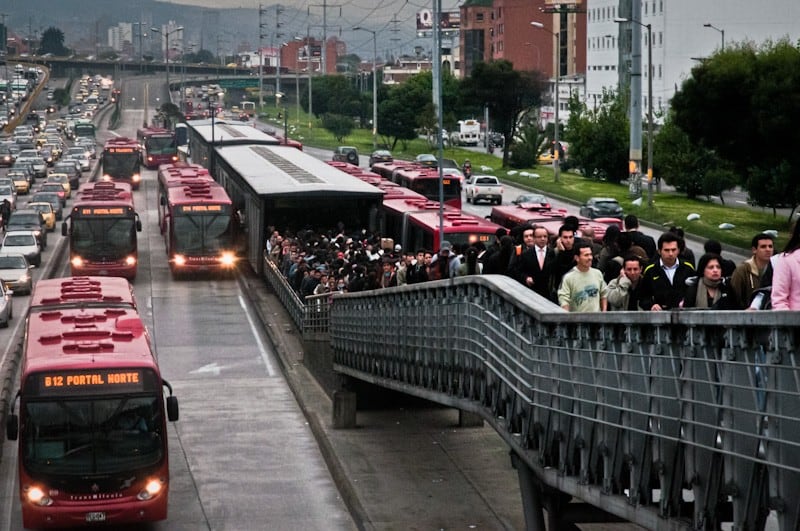 The arrival of 594 electric buses will only represent the first phase of a project that aims to renew the public transportation network of Bogotà. The medium term target is to have 2,700 low or zero emission buses in operation. The first 594 units will anyway be enough to allow Bogotà to show off the largest fleet of electric buses in Latin America. A record that, today, is held by Santiago de Chile, thanks to the 200 electric buses (made in China) currently in operation.

The announcement of the call for tenders was made by the mayor of Bogotá, Enrique Peñalosa, together with Transmilenio general manager, María Consuelo Araujo. According to these statements, the awarding will be done in September. The call for tender is focused on 12-metre buses and shorter models (capacity for 80, 50 and 40 passengers). According to the Colombian newspaper El Tiempo, they’ll be deployed on SITP network in Bogotà, a bus system in mixed lanes. On the other hand, Transmilenio routes are mainly operated by articulated or double articulated buses.

The 594 electric buses won’t be fast charged on line. Quoting the information reported by the media The City Paper Bogota, “The international bus manufacturers that have so far made the short-list for the Bogotá bid are BYD, Miysui – Caetano, Siemens, Sunwin, Youtong, Yinlong, Dongfeng, Sinotruck, Foton, and Zhongtong“.

Transmilenio, so far the gas protagonist

Just six months ago, in November 2018, Volvo Buses won a contract for 700 city buses for Bogotá’s BRT system called Transmilenio. The vehicles, among which 402 bi-articulated buses, will feature bodywork by Superpolo. And at the beginning of 2019 Scania won a contract for 260 gas buses. A contract that followed a previous one of 481 vehicles: the total is 741 buses. Both of these orders focused on articulated and double articulated buses with internal combustion engines. Could the SIPT bus order work as a sort of “test” for electric bus technology in order to later introduce it on the high capacity Transmilenio network?

The market for high-capacity battery-powered electric vehicles is the subject of attention from BYD, which presented a few months ago a model that the company claimed to be “the longest electric bus in the world”. In short, in recent months the challenge in Bogotà has been quite “Swedish”. The transition to electromobility is shifting the match in “Far East” terrain…

Consip has made public the tenders submitted for the supply of 1,000 electric-powered buses with plug-in charging technology and pantograph, with a total value of more than 660 million euros. The initiative will enable public administrations to acquire the vehicles, taking advantage of resources und...
On the occasion of the Business20 summit held in Bali in 2022, Karsan signed an agreement to transform minibuses and electric buses in Indonesia. In fact, the Turkish manufacturer signed a memorandum of cooperation with Schacmindo, an Indonesian company of Credo Group, to support the transformation ...
First contract in Poland for Irizar e-mobility, in a city where Solaris Urbino electric buses have so far the monopoly (a new contract for 18 units was landed lately). The Spanish company announces it has signed a contract with the Polish operator MPK Krakow to supply four 100% electric zero-emissio...
The French city of Rouen is going to deploy Ebusco 3.0 articulated e-buses on a BRT. Ebusco announces it has received confirmation that the option of 76 Ebusco 3.0 18-meter buses for Métropole Rouen Normandie is converted into a fixed order. Out of the 76 buses, 28 will be delivered by the end of 20...
Sign Up Here!