401 recently awarded battery-electric buses for Bogota (Colombia) will be again owned by Enel X and rented to bus operators, in the framework of a business model which is gaining ground in Latin America (starting with Santiago de Chile). Enel X will also build two new electriterminals to host the e-buses.
This award follows Enel X’s 2019 commitment with Transmilenio to build and operate four electroterminals that charge around 500 electric buses. 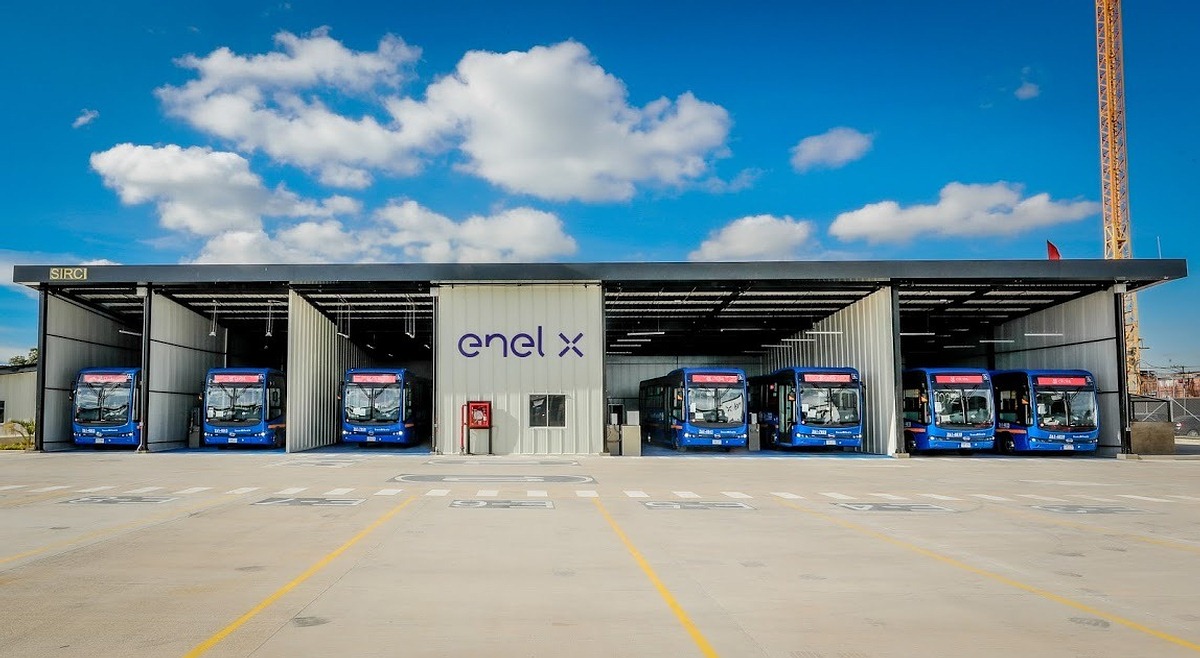 Enel X, the Enel Group’s advanced energy services business line, was awarded by Bogotà’s bus rapid transit system Transmilenio a contract to provide the Colombian capital’s Integrated Public Transport System (SITP – from the Spanish Sistema Integrado de Transporte Público) with 401 full-electric buses and two brand new electroterminals for their charging. This award, which follows the contract signed at the end of 2019 with SITP for the construction of four electro-terminals that is currently ongoing, will bring to around 900 the number of e-buses served by Enel X in Bogotá, making the company a key partner of SITP in contributing to the city’s decarbonization plan.

Bogotà is the second Latin American mega city – after Santiago de Chile – to benefit from a sustainable zero-emissions public transport initiative promoted by Enel X. This award brings the number of e-buses managed by Enel X globally to almost 1,400.

The electric buses, which will be manufactured by the Chinese automakers BYD and are expected to be delivered to Bogotá between the end of 2021 and early 2022, will be charged with clean energy, coming from 100% renewable sources at the electroterminals built by Enel X. The buses will be equipped with security cameras, wi-fi and USB recharging hubs in order to provide a comfortable, sustainable and high quality service to all passengers.

The two electroterminals, which are expected to be operational between November 2021 and April 2022, will be built in two different areas of Bogotà (Usme and Fontibon) and will include approximately 200 e-bus chargers.

This initiative is framed within the broader actions that Enel X is carrying out to boost electric mobility in public transportation. These initiatives include the partnership with AMP Capital, a global investment manager with over 30 years’ experience investing in the infrastructure asset class, to scale up investments in electric public transportation infrastructure in the Americas through a joint venture which currently owns a fleet of 435 operating electric buses and associated charging infrastructure in Santiago de Chile, Enel X points out. In addition, Enel X is implementing other e-bus initiatives in Brazil (Sao Paulo), Perú (Lima), Uruguay (Montevideo), the United States, Spain (Barcelona) and Italy.

Enel X is also part of the group of 17 bus manufacturers and investors who signed a pledge, in December 2020, to accelerate e-bus deployment in Latin America within the Zero Emission Bus Rapid-deployment Accelerator (ZEBRA) alliance. ZEBRA is seeking to secure USD1 billion in investments to deploy over 3,000 electric buses onto the streets of Latin America.

As part of the commitment, manufacturers (will expand their supply of electric buses in Latin America within 12 months, with a specific focus on cities in Brazil, Chile, Colombia, and Mexico, while financiers will make investment funds available for zero-emission bus projects.

Enel X for the decarbonization of public transport

“This award is a new milestone in Enel X’s continued commitment to decarbonization by also enhancing sustainable electric public transportation,” said Francesco Venturini, CEO of Enel X. “Cities are home to more than half of the world’s population, significantly contributing to global transport emissions. Decarbonizing urban mobility, starting from public transportation, should be an utmost priority and requires a massive effort from the private and public sectors. Enel X aims to be a key industrial partner in the shift  towards a sustainable city model to meet current and future urbanization and electrification challenges, helping to build sustainable megacities.”

On the topic of e-bus deployment in Latin America,
A dedicated report is published on Sustainable Bus Magazine #2 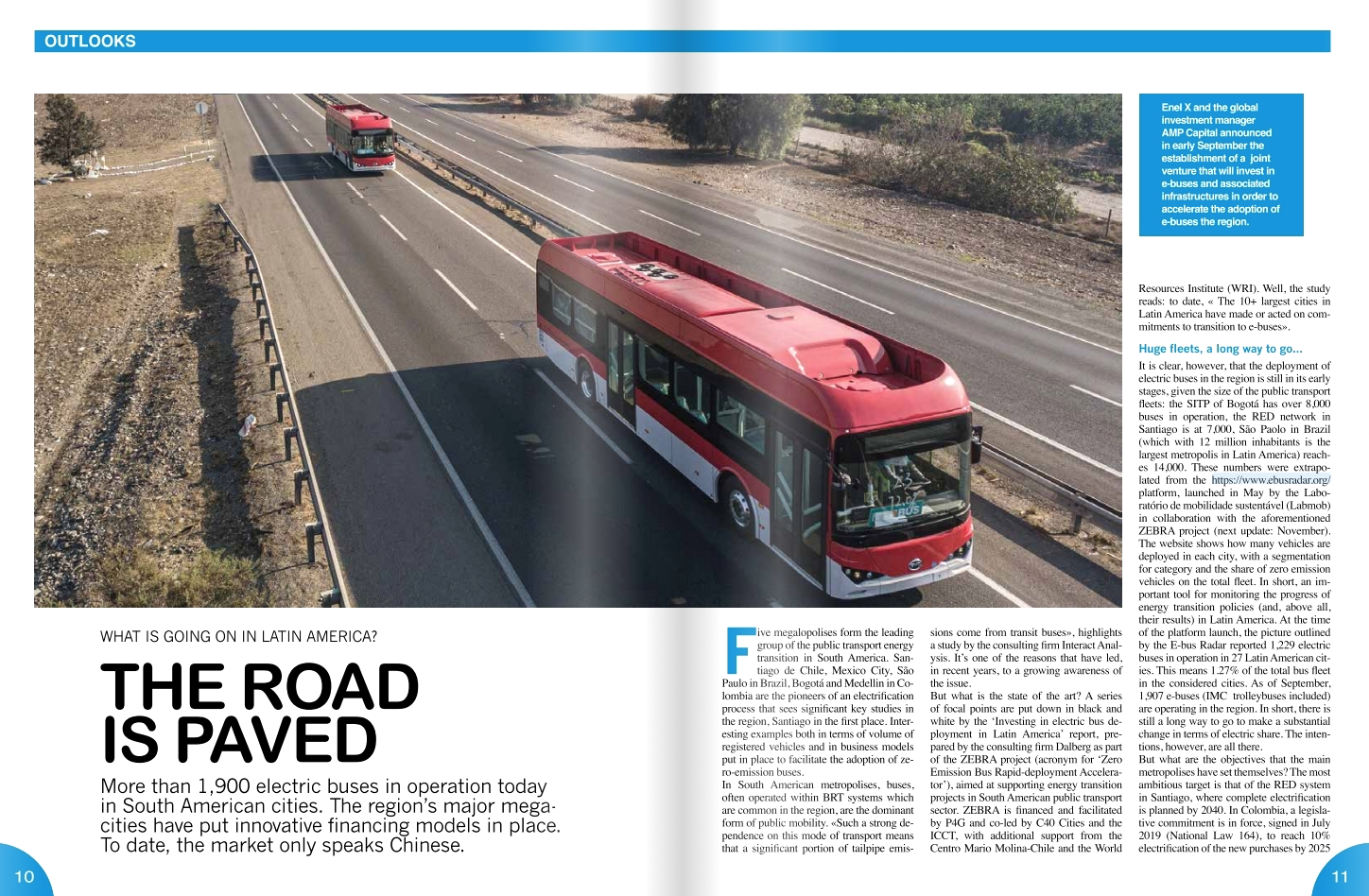 Busworld North America‘s doors were opened on Saturday 4th Februrary in Detroit. It’s the first edition of a new format realized in cooperation with the motorcoach operators’ association American Bus Association (ABA), whose marketplace is taking place together with the exposition....
A new flagship project for global electric mobility. UITP announces the launch of eBRT2030, the new European Union initiative that aims to support sustainable urban transport by proposing innovative solutions for electric Bus Rapid Transit. Coordinated directly by UITP, EBRT2030 was presented in Bru...
Arrival appoints Igor Torgov as new CEO and announces immediate actions to further reduce its operating costs and to optimize the deployment of its current cash resources. This includes the decision to reduce its global workforce by approximately 50% to 800 employees (up compared to the previously d...
The US e-bus market experienced a 66% increase since 2021. As of September 2022, the total count of full-size battery-electric and fuel-cell electric transit buses has reached 5,480 (it was 3,297 in 2021). The data is reported on CALSTART Zeroing in on ZEBs annual report, that provides an updated in...